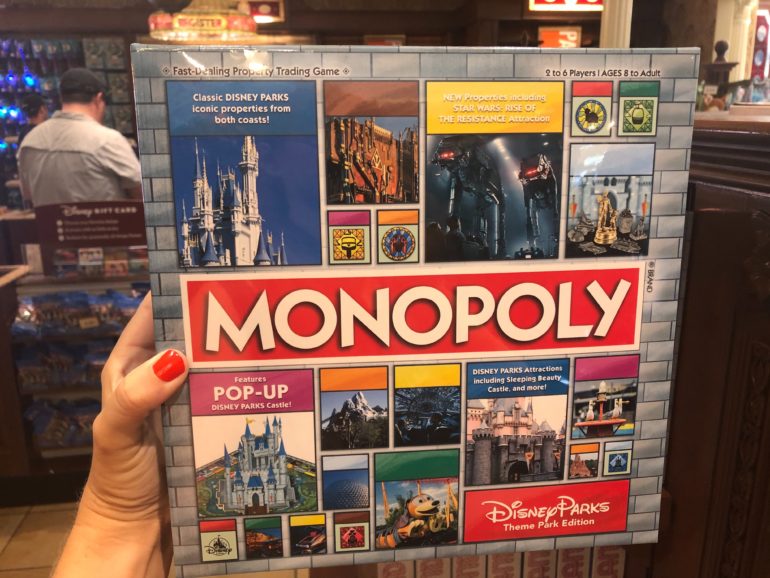 PHOTOS: New Disney Parks Monopoly Featuring Star Wars: Rise of the Resistance Spotted at The Emporium in the Magic Kingdom

Have you ever wanted to feel like Bob Iger or Bob Chapek, owning the Disney Parks? Well now you can, with the new Disney Parks Monopoly board game found today at The Emporium in the Magic Kingdom!

Instead of the traditional properties to buy on the Monopoly board, the Disney Parks edition features Disney attractions such as Expedition Everest, Spaceship Earth, and the soon-to-be-opened Star Wars: Rise of the Resistance.

In place of traditional Monopoly features, Disney Parks Monopoly brings a theme park twist to the game. Themed tokens range from Cinderella’s glass slipper to a Mickey ear hat, Magic and Fantasy cards have replaced the chance and community chest cards, and of course, you’re playing with Disney currency. You can even put down Toontown houses or castles instead of regular houses and hotels, we know which we prefer!

In the middle of the board sits a pop-up Disney Parks castle surrounded by a moat. The castle, however, is not designed to be Sleeping Beauty Castle or Cinderella Castle. (They’re opting for a generic castle route to be able to sell and distribute these across Walt Disney World and Disneyland.)

A peek at the tokens inside, including the collectors Partners statue.

Flynn Rider said it best: “Guys, I want a castle.”

A range of Disney icons are used for the tokens. Which will you be picking?

“Wishes” replace the currency in the game, with various characters in the center of the note and the Disneyland Resort and Walt Disney World Resort “D” appear in each corner.

The Magic and Fantasy cards have glass stained window designs on each of them, with the card itself having different characters and icons on- we can spot Figment!

You can pick up Disney Parks Monopoly for $49.99 and was found in the Emporium at the Magic Kingdom, however we’re sure it will be rolling across property and over to Disneyland soon. Will you be adding this to your game night?