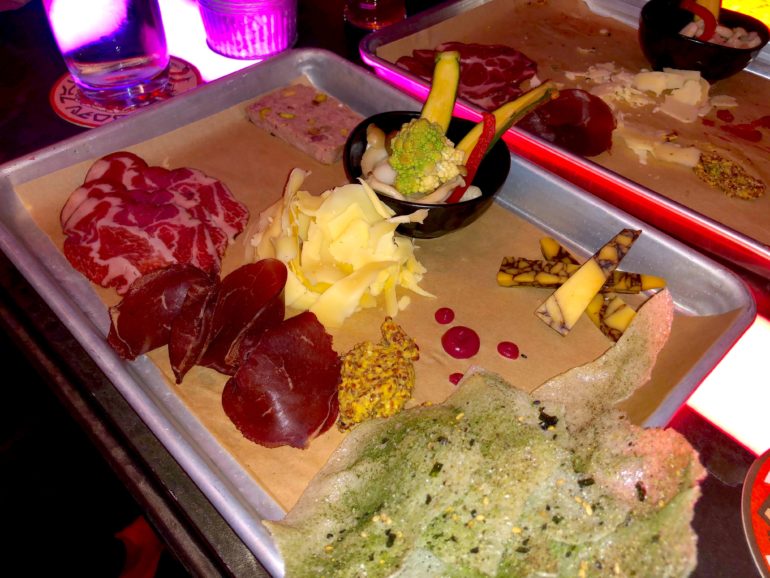 In order to better appeal to the various dietary needs and changing tastes of travelers to Batuu, there are five food new items located throughout Star Wars: Galaxy’s Edge in Disneyland Park. These are exciting additions, as Galaxy’s Edge is still a relatively new land, but it seems they’ve been tailoring menus and adding to them in response to guest feedback. There are some new vegan items, like the Ronto-less Garden Wrap at Ronto Roasters, and some… very not-so-vegan options, like the new Kyryll Pork Rinds. Along the snack front, there’s the all-new Chocolate Popcorn with Crait Red Salt over at Kat Saka’s Kettle. We’ve made it over to the shadiest dive in Batuu: Oga’s Cantina, for the new Happabore Sampler.

The Happabore Sampler features a selection of cured meats, artisan cheeses, pickled and preserved rations, and crackers. It’s billed as the perfect shareable bite to munch on while you sip on the many concoctions Oga has to offer, and we’d say that’s about right. A different variation on this recently showed up at Star Wars: Galaxy’s Edge in Disney’s Hollywood Studios, but that one was plated much differently, and included pork rinds. It’d make sense that Disney would test some of these new offerings to some degree before officially rolling them out to menus on the West Coast.

The Happabore Sampler comes in at $21.00, but considering that’s not far from what a drink costs here, it isn’t a bad value, especially if you’re here with a group.

So here’s what our sampler came with. Going counterclockwise from the left (more or less), there’s a pheasant pate, beef and pork cuts, cheddar cheese, whole grain mustard, herb-seasoned rice crisps, beer cheese, and picked veggies all plated on a parchment-lined steel tray.

It looked outlandish,  so we thought it was going to be bad, but it really wasn’t. We’ll walk you through each portion with our thoughts.

The pheasant pâté was definitely pretty out there, and the texture isn’t for everyone (as is usual for pâtés…) However, coating it with the spicy whole grain mustard on top (at the recommendation of our server) made it much better.

When paired with the cheddar cheese, the beef was a standout. The pork was very dry, and probably one of our least favorite parts.

The veggies included pickles, mushrooms, romanesco broccoli, peppers, and a slaw. As weird as these all looked, they were also very good, and not soggy, too vinegary, or off-putting.

To add some texture to the overall plate, there’s broken up sheets of rice crisps sprinkled with herbs, toasted nori bits, and sesame seeds. These were great on their own or paired with any of the meats and cheeses.

The dark marbled cheese was actually beer cheese, and we couldn’t get enough of that and the cheddar cheese as they were both super good.

If you’re here drinking with friends or a group and are looking for something to munch on or a plate to share with everyone, look no further than this new Happabore Sampler charcuterie tray. None of the food was too heavy, so you could easily share this and then go back to trekking the parks without feeling weighed down. That being said, this was notably lacking in the sauce department, which was present in the one they tested at Disney’s Hollywood Studios. That one included a bed of spiced hummus, whereas this merely had drops of condiments like ketchup and mustard.

If you happen to share this sampler tray with your group of scoundrels, let us know in the comments!