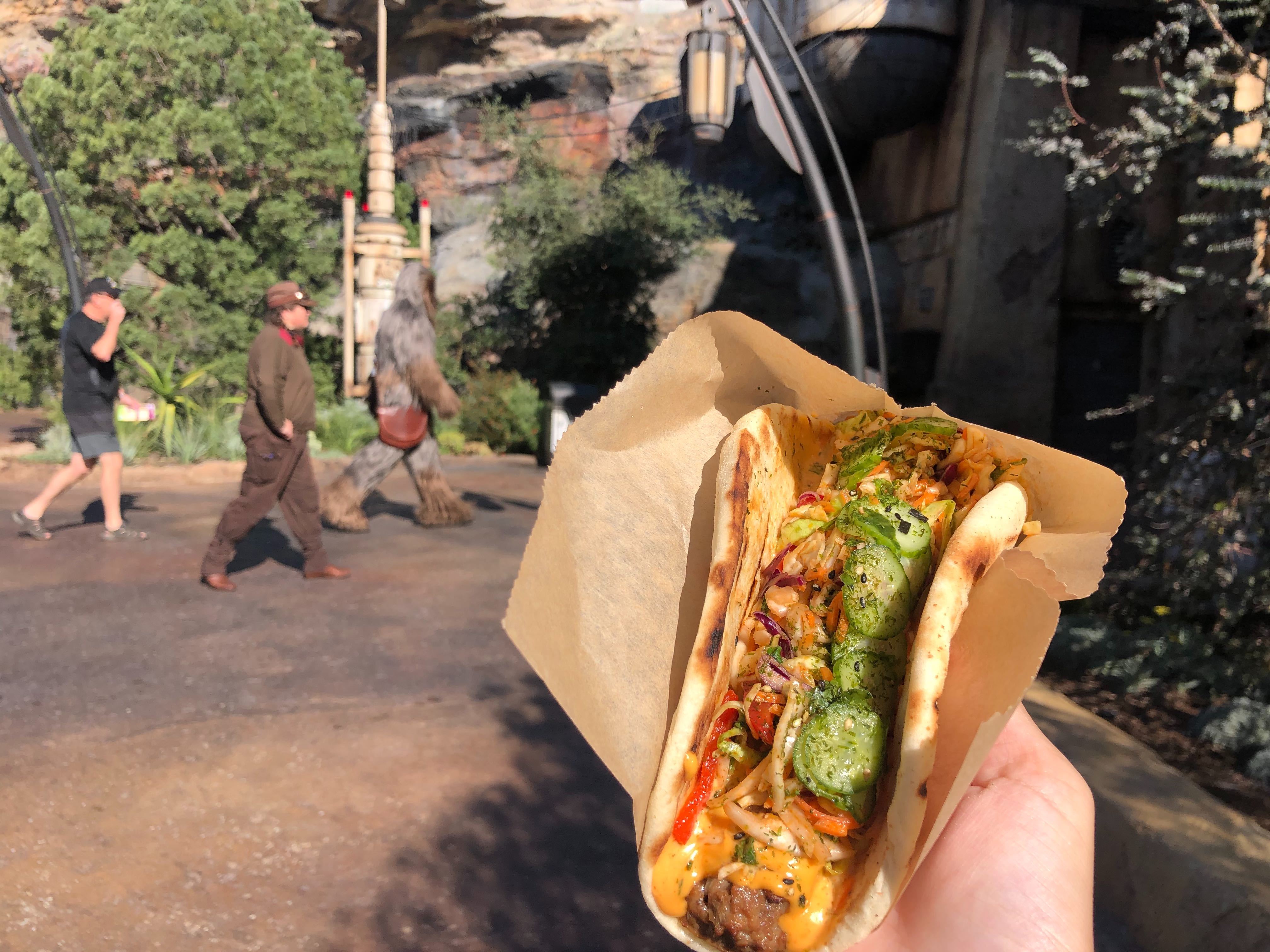 In order to better appeal to the various dietary needs and changing tastes of travelers to Batuu, there are five food new items located throughout Star Wars: Galaxy’s Edge in Disneyland Park. These are exciting additions, as Galaxy’s Edge is still a relatively new land, but it seems they’ve been tailoring menus and adding to them in response to guest feedback. Among the new offerings are some vegan options, like this new Ronto-less Garden Wrap, now available at Ronto Roasters:

The new vegan, plant-based wrap now graces the menu alongside the very not vegan (and, unfortunately for the rontos, very delicious) Ronto Wraps.

The new leaf icon that’s been rolled out across menus at all Disney Parks denotes items that contain “no animal meat, dairy, eggs, or honey.”

With various school breaks still taking place throughout Fall, there was somewhat of a line at Ronto Roasters, but we patiently waited to try the newest wrap.

The Ronto-less Wrap comes with plant-based sausage, spicy kimchi slaw, sweet pickled cucumber, and Gochujang spread all wrapped in pita. We asked a chef and were told this was Impossible brand sausage. It’s definitely a color cornucopia with fresh ingredients like cucumber and slaw making a very vibrant wrap.

Unfortunately, there was just a lot going on inside the wrap between the sauces and the slaw, resulting in a pita that got soggy very quickly. That led to the wrap having a strange overall texture.

While the wrap was mildly spicy, the accompanying sauce was sweet, which was somewhat of a weird combination. You’d have to like spicy-sweet savory foods to enjoy this.

The plant sausage was extremely chewy, which was expected, but it did taste like savory meat.

Overall, if you’re an omnivore looking to try out the latest wrap, give this a try, but if you’re a Ronto Wrap fanatic, don’t expect to be blown away or have the same experience as with a normal wrap. Things are decidedly saucier with this wrap, which might also lead to a messier eating experience as well. If you’re vegan or like to eat plant-based, you’re in luck with this new option, as this is Ronto Roaster’s very first plant-based wrap option, and you’re probably used to chewy meat analogues as it is.

If you’re headed to Black Spire Outpost and work up an appetite running from the First Order, give this a try and let us know what your thoughts are!