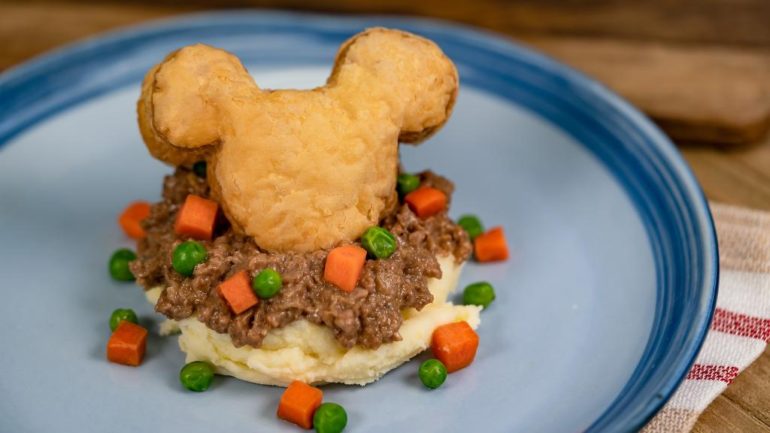 PHOTOS: A “Visual Taste” of New Items at Grandma’s Recipes for 2019 Disney Festival of Holidays at Disney California Adventure

The candy has all been given out, the costumes are put away, and it’s time to start thinking about the holidays… specifically, the Disney Festival of Holidays at Disney California Adventure. And to kick off the season, Disney has revealed a “visual taste” of the new items coming to Grandma’s Recipes, one of the Festival Foods Marketplace booths, this year.

#FestivalOfHolidays is coming back––and so is Grandma's Recipes! Here's a visual taste of the new items coming to this beloved festival marketplace. 🍽 #FirstLook pic.twitter.com/20iNifF3B8

No descriptions of the items were given, so what follows is pure speculation.

The first dish resembles a deconstructed Shepherd’s pie, with some sort of meat (perhaps the beef pot roast is returning from last year) on top of mashed potatoes, with peas and carrots and topped with a Mickey-shaped puff pastry.

This second dish appears to be a vegetarian dish, perhaps involving mushrooms. It would be in line with Disney’s push for more vegan and plant-based options to be available in the parks.

The third is a beverage that seems to resemble last year’s Merry Cherry Pineapple Punch. What looks particularly new is the Mickey ornament glow cube to make this drink merry and bright!

As always, this is pure speculation as to what the items are, but keep reading WDWNT and Disneyland News Today as we learn more about everything coming to this year’s Disney Festival of Holidays at Disney California Adventure!