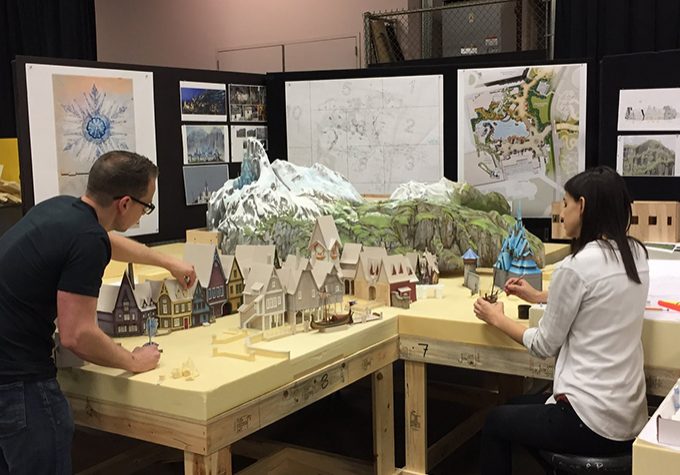 This morning, many Disney Parks fans and armchair Imagineers alike were treated to a special behind-the-scenes look at many of the first projects developed by WED Enterprises in the first episode of “The Imagineering Story.” (You can catch our full review of it here!) The Walt Disney Imagineering department even rolled out a fascinating new website filled with photos and information as a supplemental to the series. Within the site’s “Experience By Design” section detailing the process by which these new attractions, resorts, and experiences come to life, we got a special sneak peek at the model for the upcoming Frozen themed land coming to Hong Kong Disneyland.

In the model, we see the town of Arendelle with its many homes, tiny shops, and facades. Off in the back, you see the snow-topped mountains looming over the village. Imagineers are working to paint and sculpt the model to scale so that then renderings can be expanded for large-scale build.

We got a view of the concept art, as well as further details on the land’s offerings during this year’s D23 Expo.  The Frozen themed land is set to open in 2021 in Hong Kong Disneyland’s Fantasyland.

A replica of Epcot’s Frozen Ever After attraction will also be opening here. Frozen Ever After takes guests on an adventurous journey through the kingdom of Arendelle. And during visits, guests will have the chance to see Elsa create a beautiful “winter-in-summer” day.

The replicated attraction will also be coming to Disneyland Paris, however at Tokyo DisneySea’s Fantasy Springs expansion, Oriental Land Co. has decided to build something original and more lavish related to Frozen.

Further expansion of Hong Kong Disneyland will also include a newly reimagined Castle of Magic Dreams opening in 2020. We can’t wait to see more sneak peeks make their way onto the Imagineering docuseries and website in the coming weeks.