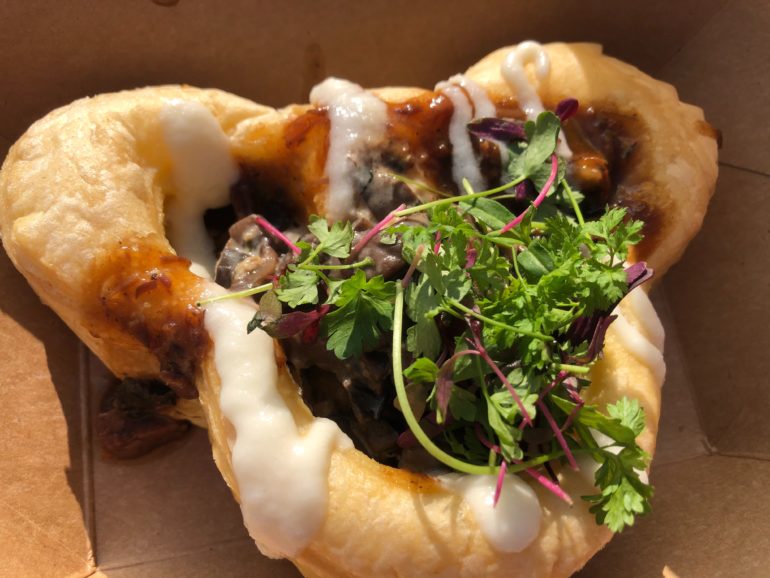 REVIEW: Mickey Beef Wellington and More at “A Twist on Tradition” Marketplace for Festival of Holidays 2019 at Disney California Adventure

There’s been a major twist-up at A Twist on Tradition Marketplace at the 2019 Disney Festival of Holidays at Disney California Adventure. Gone are last year’s Spanish and Mexican-inspired dishes, with new “tempting twists on holiday classics” (and one returning from another Marketplace) headlining the menu. So without further ado, let’s twist again!

The Mickey-shaped puff pastry here is pretty adorable and was light and easy to cut.

The filling tasted like stroganoff, except without the noodles. The meat was tender and still had good flavor.

The micro greens were a fresh addition amidst the heavy beef sauce, buttery crust, and creamy topping.

This wasn’t much of a deviation on Beef Wellington as the “twist” would imply, but it’s still very good, and we would get it again.

This item is a holdover from the Favorite Things Marketplace last year. These came with a huge portion of tots covered in sauerkraut and chunks of ham. It may have been better with shredded meat, but overall for the price this was well received.

The pear mule is awesome and tastes like a vanilla and ginger beer mix. We didn’t pick up many pear notes, but it does have a small kick from the ginger beer.

Overall, we liked this and would get it again thanks to its light and clean taste. If you’re sampling a lot of different foods at the festival, this is a good palate cleanser.

Which items intrigue you? Which classics do you think should’ve been left alone? Let us know in the comments below, and keep reading WDWNT and Disneyland News Today for ongoing coverage of the 2019 Disney Festival of Holidays!