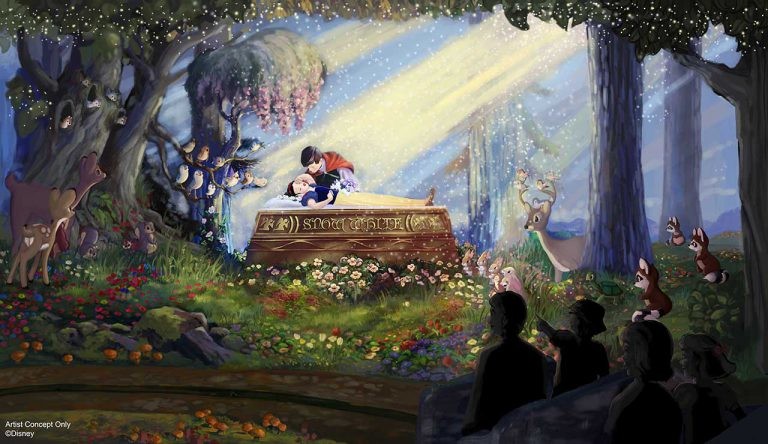 As we told you a few weeks ago, changes are coming to Snow White’s Scary Adventures in Disneyland next year. Disney has announced some vague details as to what will be happening.

This classic Fantasyland attraction, Disneyland park’s only ride-through princess attraction, will be updated inside and out in 2020. Walt Disney Imagineering is reimagining how the classic tale of Snow White lives happily ever after, and guests will be invited to follow along with her story.

In addition to experiencing familiar elements of the attraction you know and love, you’ll discover enhanced story details and all-new scenes. For example, a new vignette will show Snow White in a beautiful forest setting waking up from her deep sleep. Also, the attraction will conclude when Snow White is reunited with her animal friends and a shimmering castle is seen in the distance. It would appear that this would be replacing the death scene of the witch based off of the placement of the rocks and the characters above, but Disney has made no such confirmation.

Imagineers are implementing state-of-the-art audio and visual technology throughout the attraction, including new music, LED black lighting, laser projections and a new animation system. The exterior of the attraction will be completely refreshed with new, fairy tale-inspired details to complement the nearby charming Sleeping Beauty Castle.

This isn’t the first time the attraction has undergone a significant refurbishment. In 1983, as a whole new version of Fantasyland was unveiled, Snow White’s Adventures reopened with new technology and a brand-new facade, along with the new name. In 2020, this opening day attraction will celebrate 65 years at Disneyland!

Snow White’s Scary Adventures will be open through Jan. 6, 2020 before closing for this reimagining.