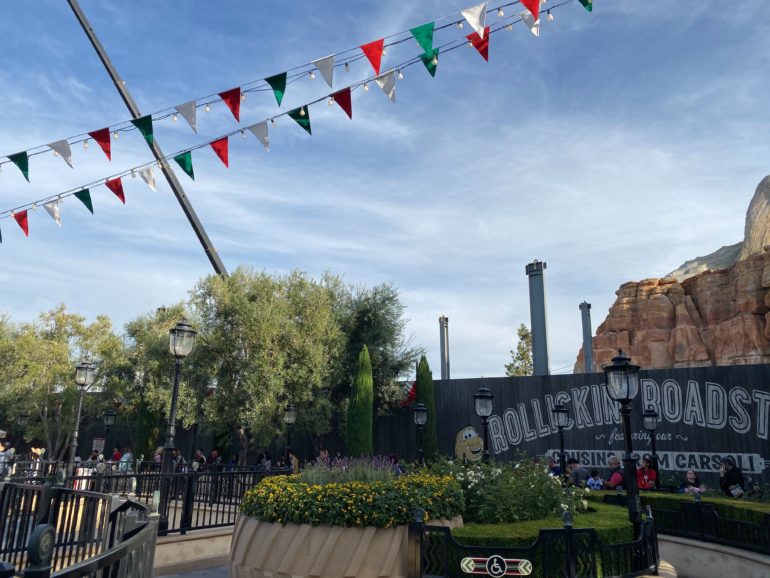 Work is really starting to progress on Avengers Campus coming to Disney California Adventure and we have some pictoral evidence of vertical construction. Slated to open in 2020, this Avengers-themed land will open in phases, much like Star Wars: Galaxy’s Edge, with the E-Ticket Avengers ride opening long after the land debuts.

While the location of this new vertical construction behind Luigi’s Rollickin’ Roadsters leads us to believe that this is a backstage facility, it is disheartening to see ruined sight-lines in Cars Land. I hope they theme whatever this is.

Near where the Doctor Strange show and the Avengers Gift Shop is slated to be, we can see a metal structure peaking up over the fence as well. It seems they just don’t about the Marvel Land intruding on the well-themed PIXAr area. I know Tower of Terror never fit in, but there wasn’t much they could do about that. A new build is something you can strategically plan out.

I don’t want to even talk about W.E.B. Industries (home of the Spider-Man attraction) taking over the entire backdrop of Mater’s Junkyard Jamboree.

The Spider-Man facade is coming along, as it should since the ride is scheduled to open next year.

A crane looms over Cars Land.

The first part of Avengers Campus is slated to open in 2020, so are you ready to get your superhero on?