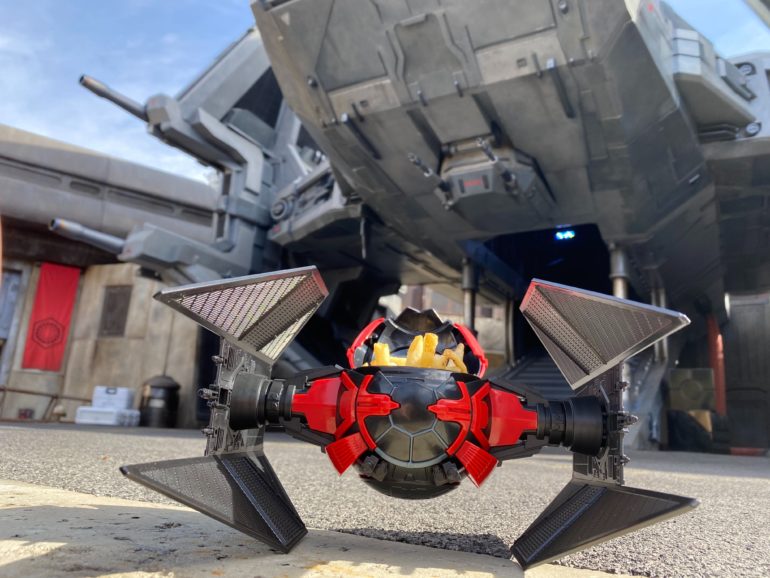 It’s been quite the week for epic Star Wars-themed popcorn buckets at Disney Parks, and just when we thought we’d seen it all, Disneyland has to upstage us all with the new Kylo Ren TIE Interceptor Popcorn Bucket. This is no ordinary TIE Interceptor. It’s actually Kylo Ren’s modified starfighter known as the TIE Whisper, which was first used as a First Order TIE line interceptor used during the war against the Resistance. During the war, Ren used his TIE whisper to confront Rey on the desert world of Pasaana. You may remember this scene from The Rise of Skywalker, where Rey jumped over his ship and sliced off one of its wings, causing it to crash. Ren flew another TIE of the same model to Kef Bir, where he again confronted Rey in a lightsaber duel. Rey eventually defeated him, took the TIE, and flew it to Ahch-To, where she angrily burned it… and now it’s making a comeback. With fries. The bucket could easily double as an accurate plastic model toy of the ship, except the main pod actually opens up to hold your selection of snack. The Kylo Ren TIE Incerceptor bucket comes with your choice of fries or a slush for $19.49, or a soft drink for $18.49 (plus tax.) You can find it at Galactic Grill, but we can’t blame you if you take it over to Batuu. Unlike most buckets, this does not come with a strap. You’re just left lugging around a TIE Fighter all day, but hey, at least it’s cool. We can only hope to spot this new souvenir snack bucket at Walt Disney World soon, and when it does… we’ll be ready.