Greetings, space travelers! As you enter the world of tomorrow, you might have seen a bit of construction going on by the entrance over the past few months. Right by Buzz Lightyear Astro Blasters and Star Tours, we’ve seen construction occurring on these two walls. Today, the wall by Star Tours has been revealed and it’s a sight to behold! 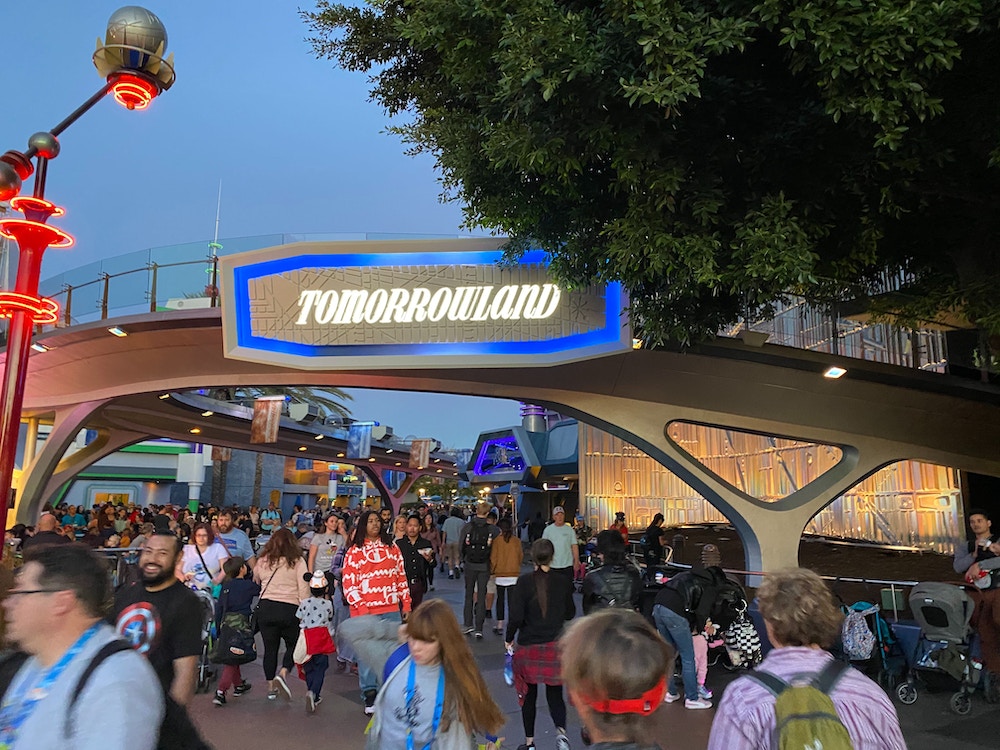 Once you step underneath the entrance to Tomorrowland, you can properly see the shiny metallic walls that greet you into a futuristic world. 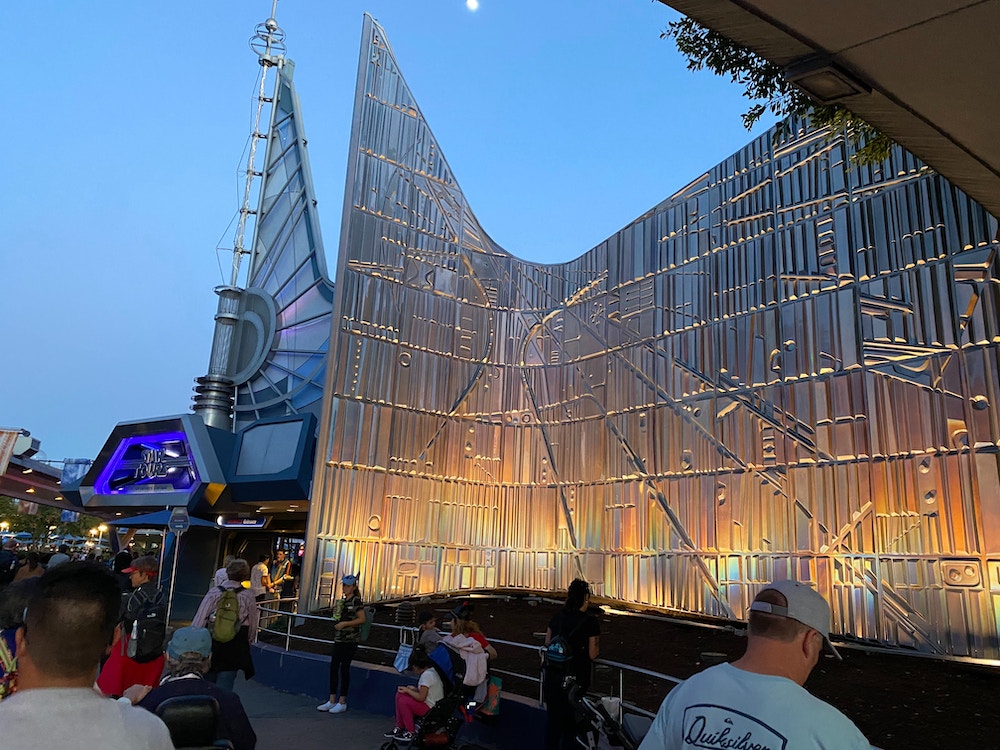 These newly redone walls immediately capture your eye as you step in, and they mirror the same design that’s on the Tomorrowland sign as you enter the land. While these are the same walls that have flanked the entrance of Tomorrowland for decades, they’ve received new holographic paint, as well as a bit of a refresh. However, some guests have commented that some of these tiles may have been re-installed incorrectly when following the overall design. When looking up near the top left side of the wall, it appears that part of the space-age rays aren’t quite lining up properly with the others. 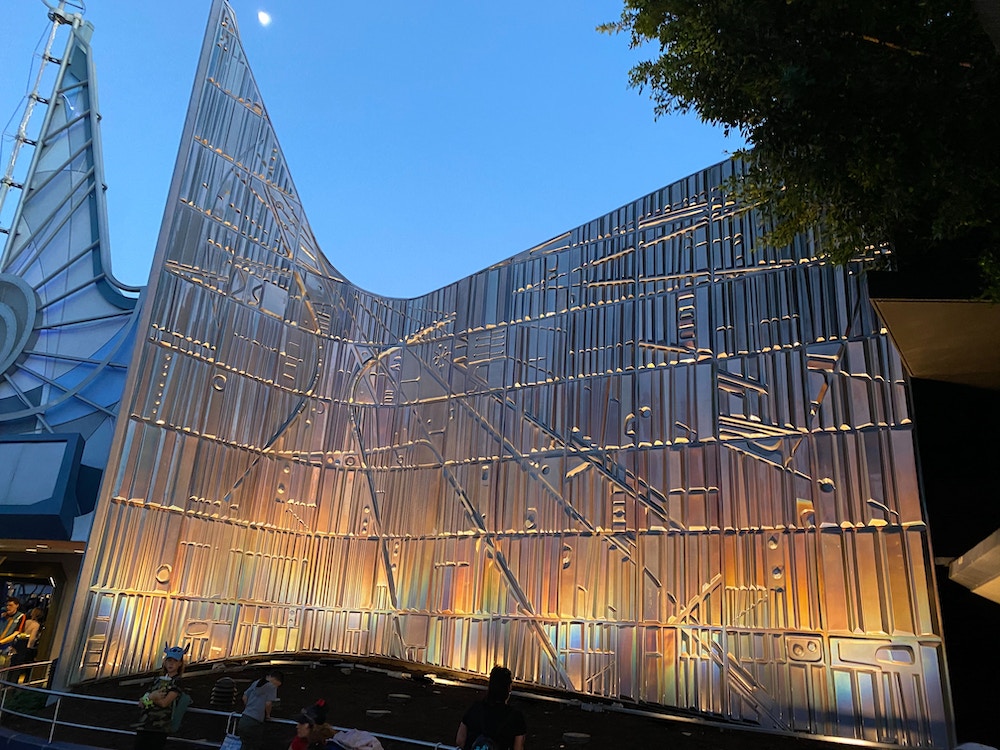 The grid-like design reminds us of a data chip, which seems fitting for a land focused on the future and technological advances. When “new” Tomorrowland debuted at Disneyland in 1967, Walt Disney and his Imagineers envisioned this land as a “world on the move,” featuring a variety of futuristic vehicles zooming around and the Googie architecture that had become representative of the Space Age. 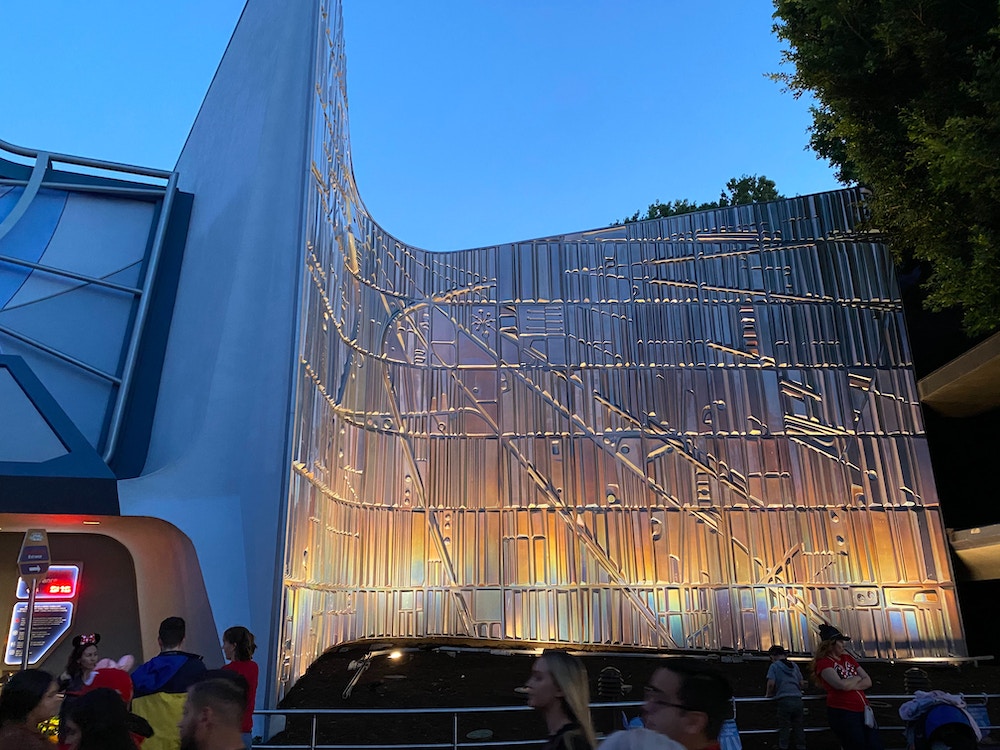 Embedded lights beneath it shine at just the right points to show off the metallic finish and add to this futuristic vibe of the land. 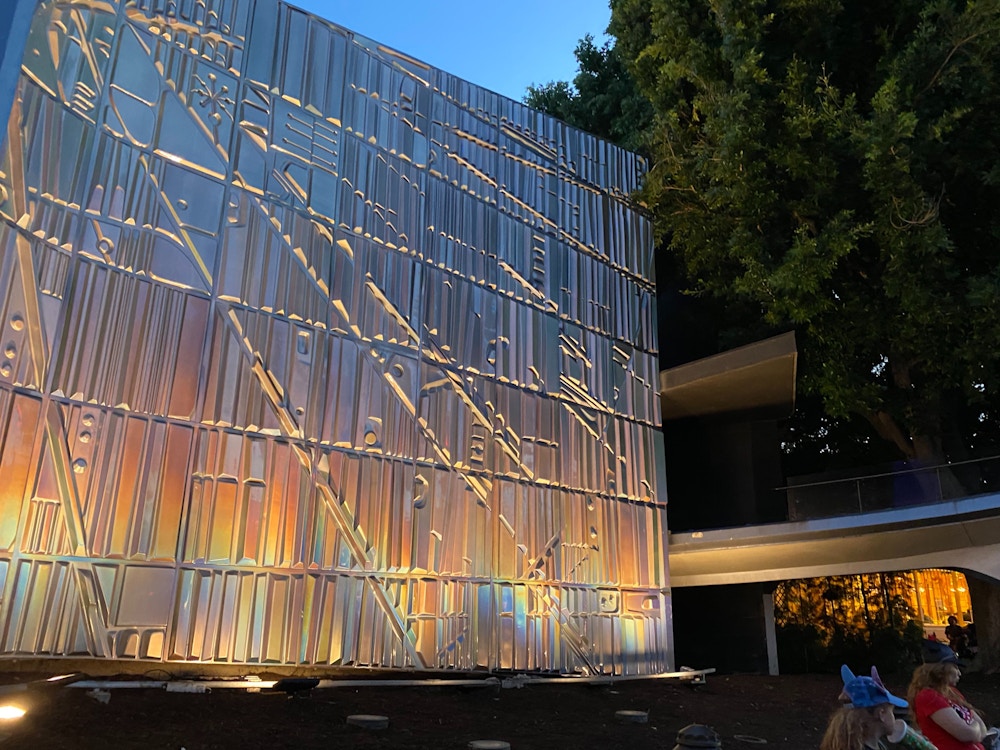 We can’t wait to see this properly in the sunshine, though it might be a little bit too bright then. After all, the future’s so bright, you gotta wear shades. 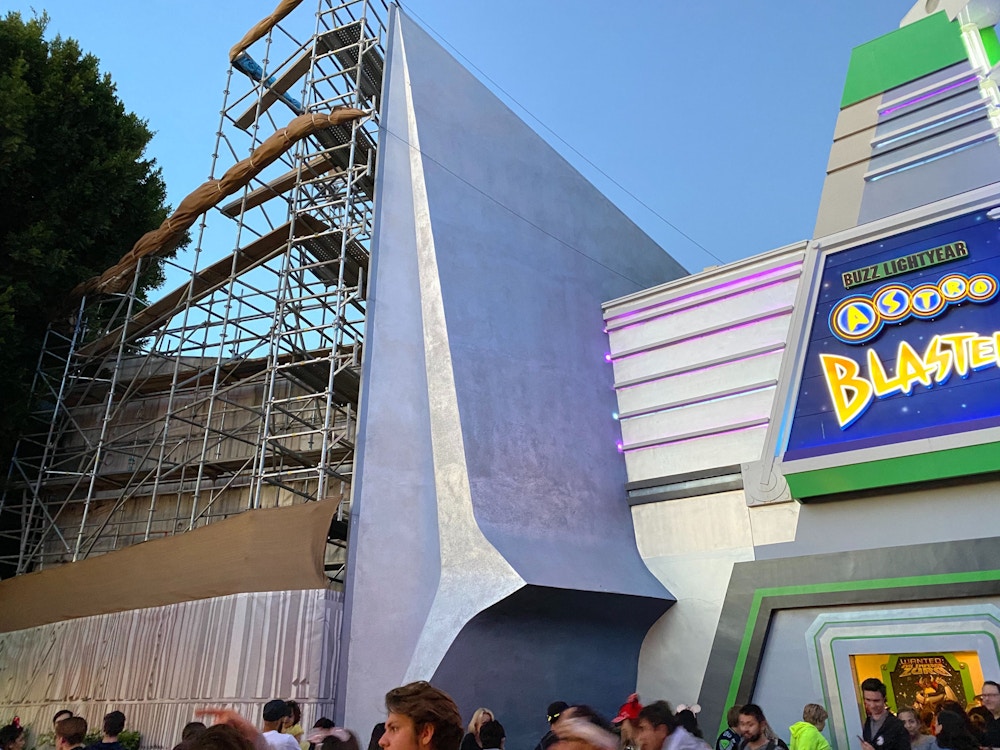 As the line for Astro Blasters curves around this wall, we can see the other side of the entrance still under construction. We’re eager to see it be completed, since the other side is gorgeous. 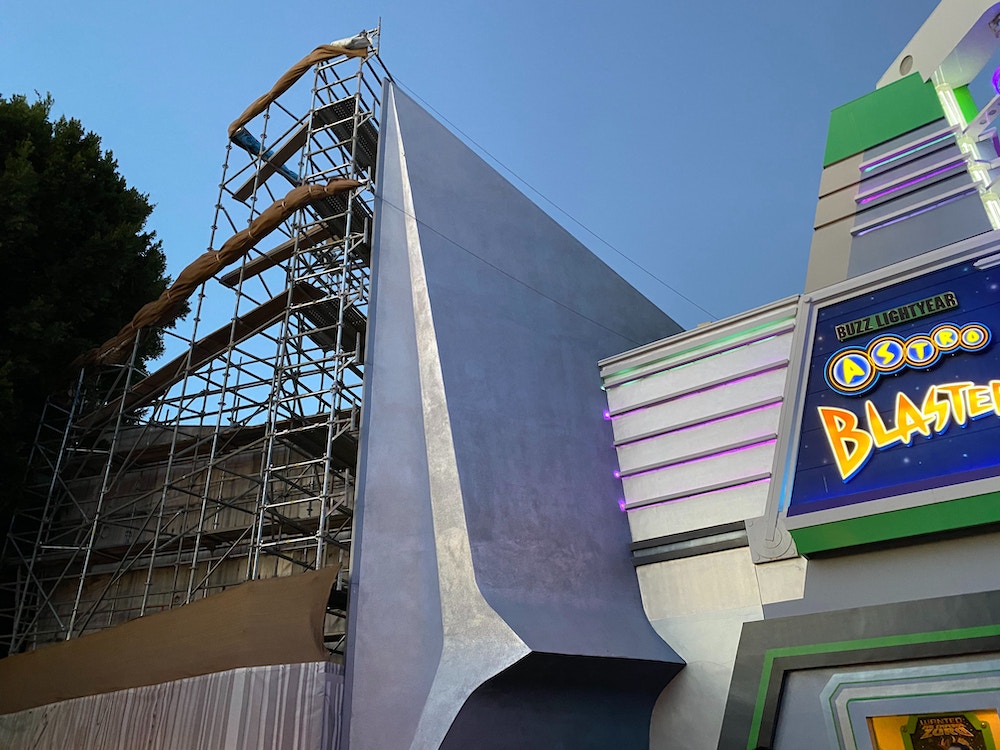 This metallic silver finish on the small part of the wall definitely adds a futuristic look to Tomorrowland, but the finished product will definitely be a major improvement. 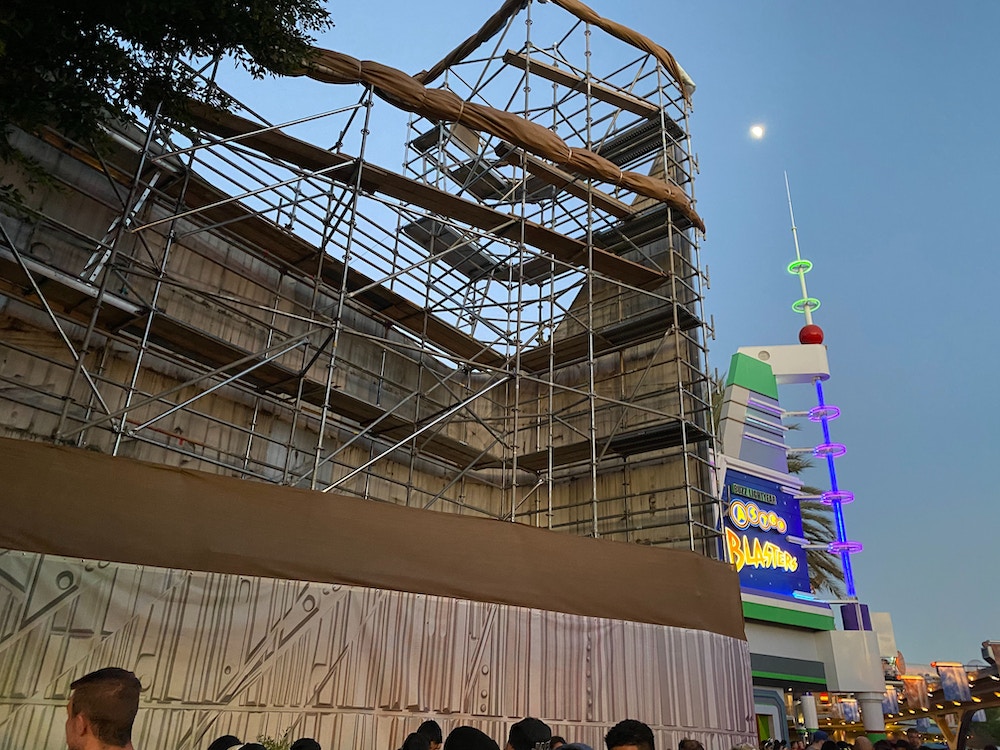 The back of the wall still shows the scaffolding and scrim up, which features a design of what the finished product will look like. This was all we had to go off of for the longest time before the other side was finally revealed. Hopefully now with the other side finished, we can see this side of the entrance wall officially completed soon.

This is all a part of Project Stardust, which involves various enhancements all over Disneyland Resort that have ranged from overall beautification of the theme park to maximizing guest flow. This space-aged inspiration pays homage to Tomorrowland entrances of yesterday. Disney Imagineer Kim Irvine noted, “Tomorrowland has always represented a feeling of optimism. Imagineer John Hench originally designed the land with this notion of being wide open to innovative ideas and technology. When we started looking at the different Tomorrowland entrances through the years, both the 1955 and 1967 versions had a very optimistic appeal which resonated with us.”

What do you think of the finished product? Do you like the shiny, newly refreshed wall as you enter Tomorrowland?