Just a few weeks ago, Disney announced that phase one of the Avengers Campus will open in Summer 2020 at Disney California Adventure. That means we’re only a few months away from seeing all that Spider-Man has to offer California. Let’s head over to Mater’s Junkyard Jamboree to get the best view of what’s new since our last construction update on the new land. 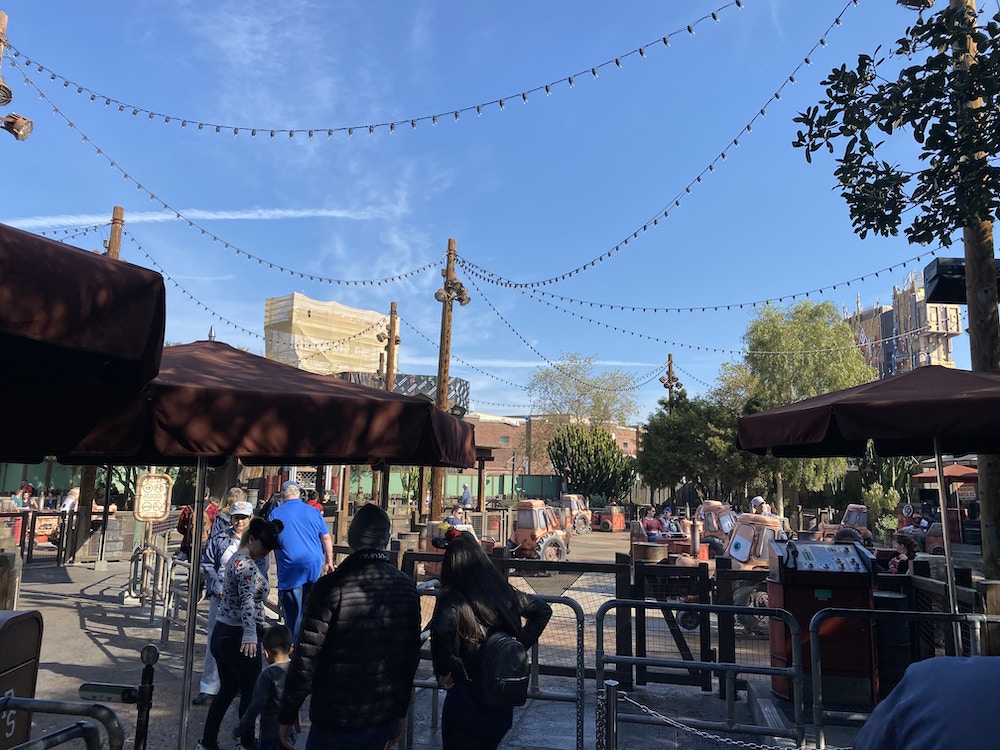 You can see quite a bit of the construction behind the string lights, but we’ll take a closer look. The main thing we see looming in the distance is the new Spider-Man attraction and the WEB Industries building that surrounds it. 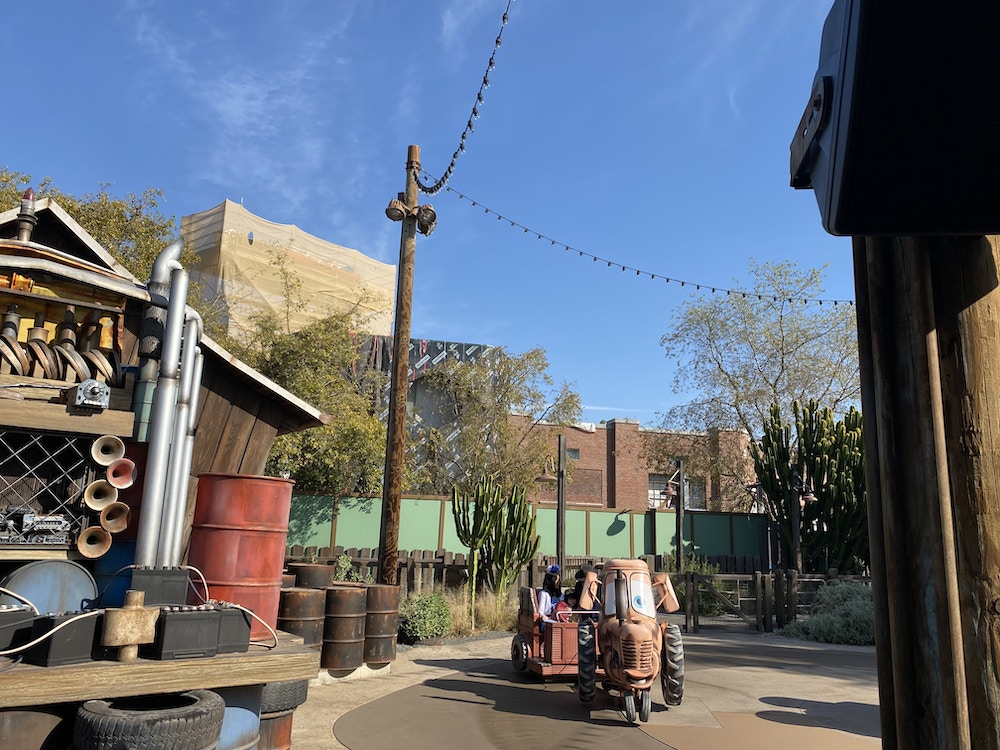 Again, we expect the tan building on the left to be part of the Spider-Man attraction. During the ride, you’ll be able to sling webs like Spider-Man; click here to check out the ride vehicles. Part of the attraction will be housed in the former Bug’s Life theater which closed back in 2018. 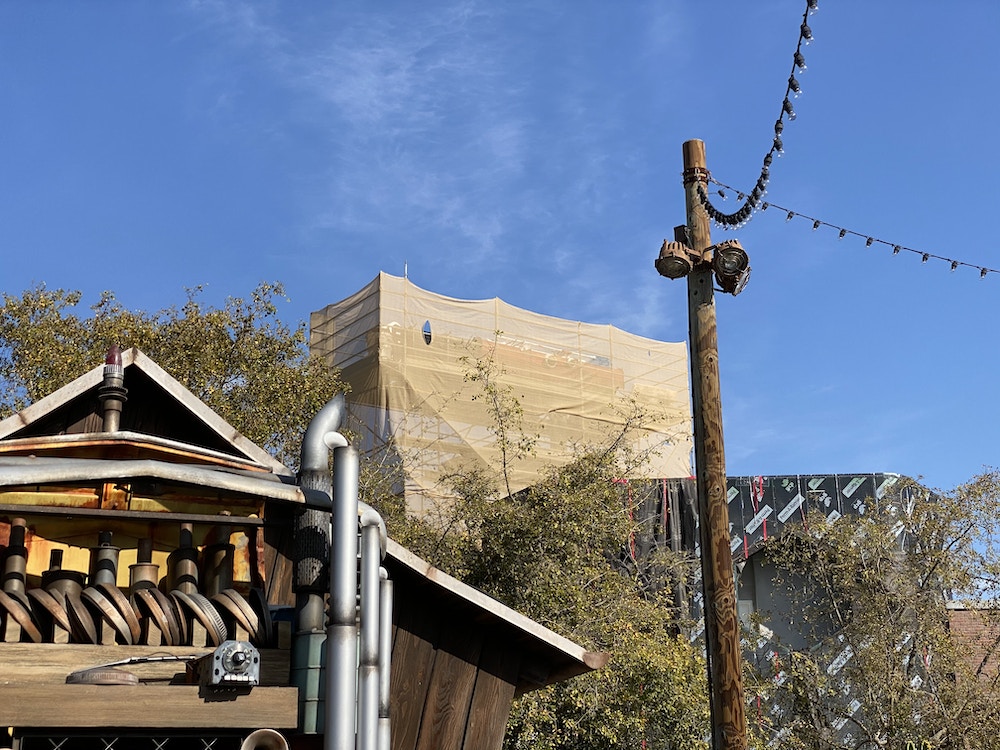 Here’s a closer look at the building, this portion seems to be the red part of the Spider-Man building seen in the concept art. 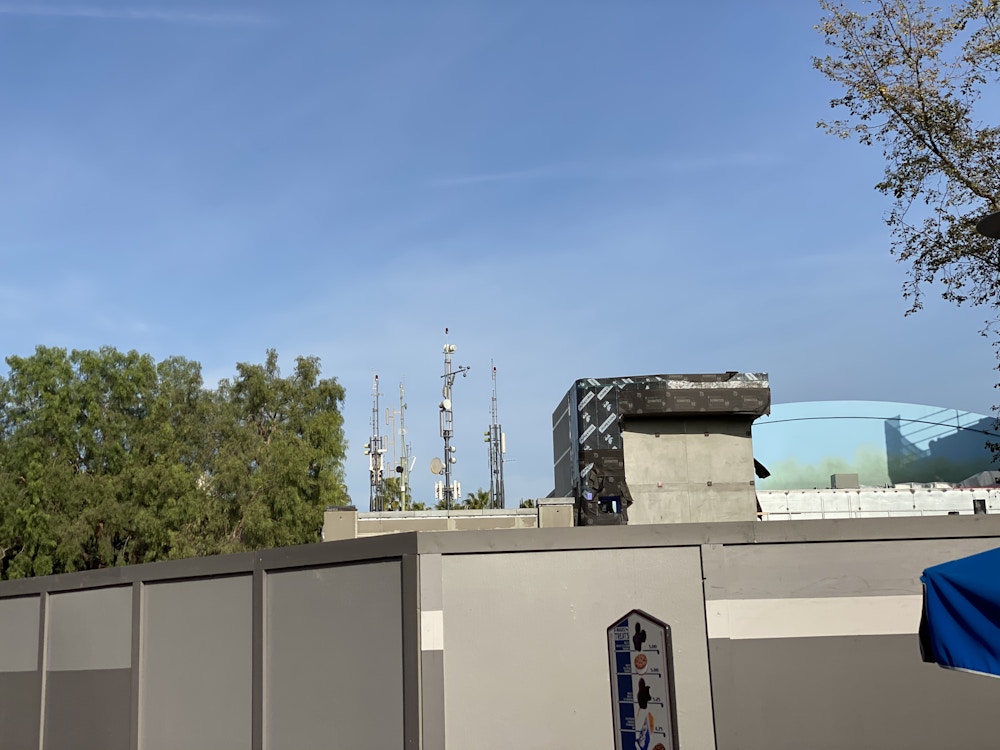 Also for the Spider-Man attraction, we can see from another angle that the building’s facade is being worked on. The blue and green building is the former “it’s tough to be a bug” theater, which surprisingly hasn’t been painted over yet. You can easily see that this is the left side of the future Spider-Man attraction given the instruments on the roof that also appear in the concept art. 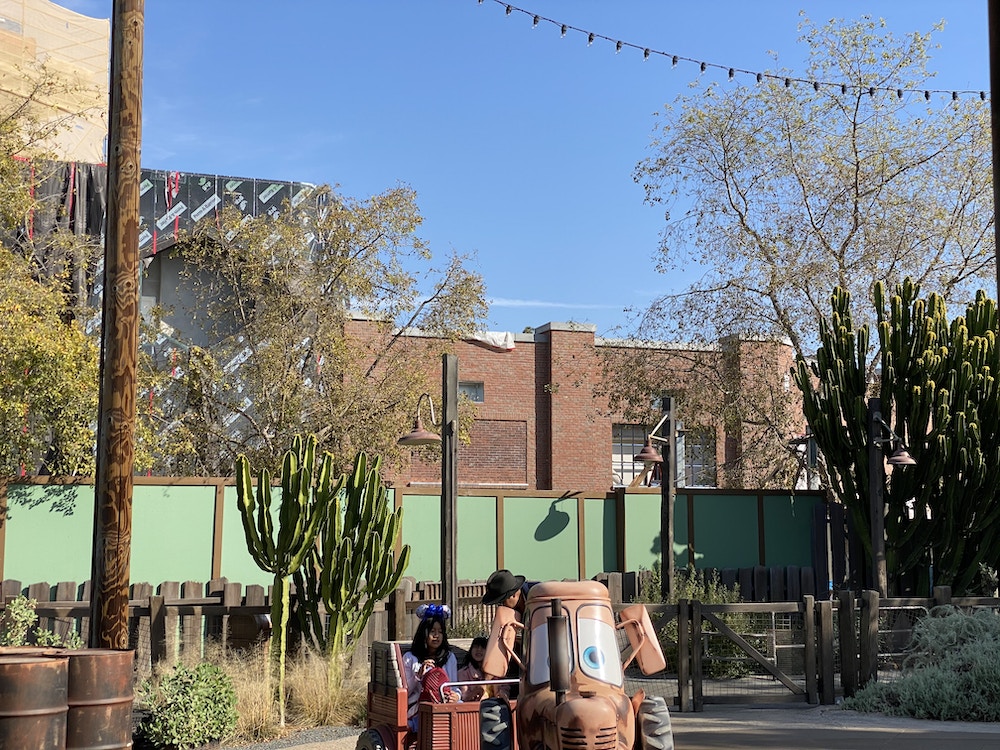 While loading onto Mater’s Junkyard Jamboree, you can see the W.E.B Industries building in the center of our view. 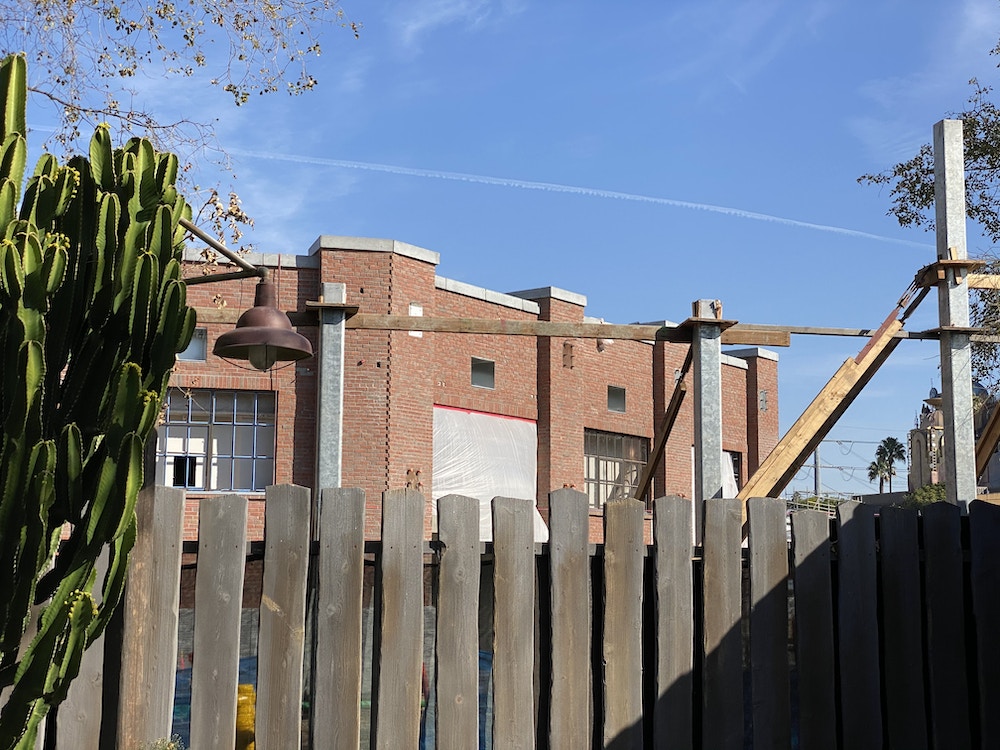 Let us refresh your memory about W.E.B. from Disney’s overview of the Marvel Avenger’s Campus:

“As part of this global initiative, Tony Stark has founded the Worldwide Engineering Brigade — or WEB for short— to develop advancements in super-powered technology, including new enhancements to Spider-Man’s suit as their debut project. Disney is expanding its story universe by creating a new organization, the Worldwide Engineering Brigade, to be the setting for this experience.” 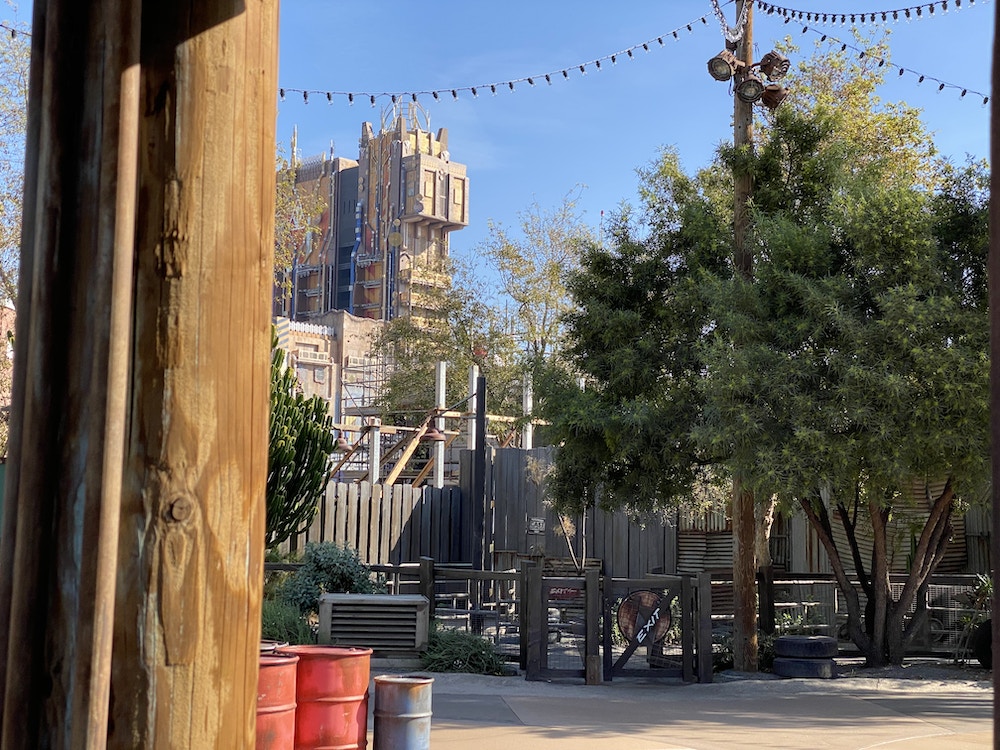 Finally, there’s some additional infrastructure being built behind the attraction. Whether this is for some sort of camouflage to maintain the thematic integrity of each land, or simply part of the Phase 2 expansion, is still unknown. 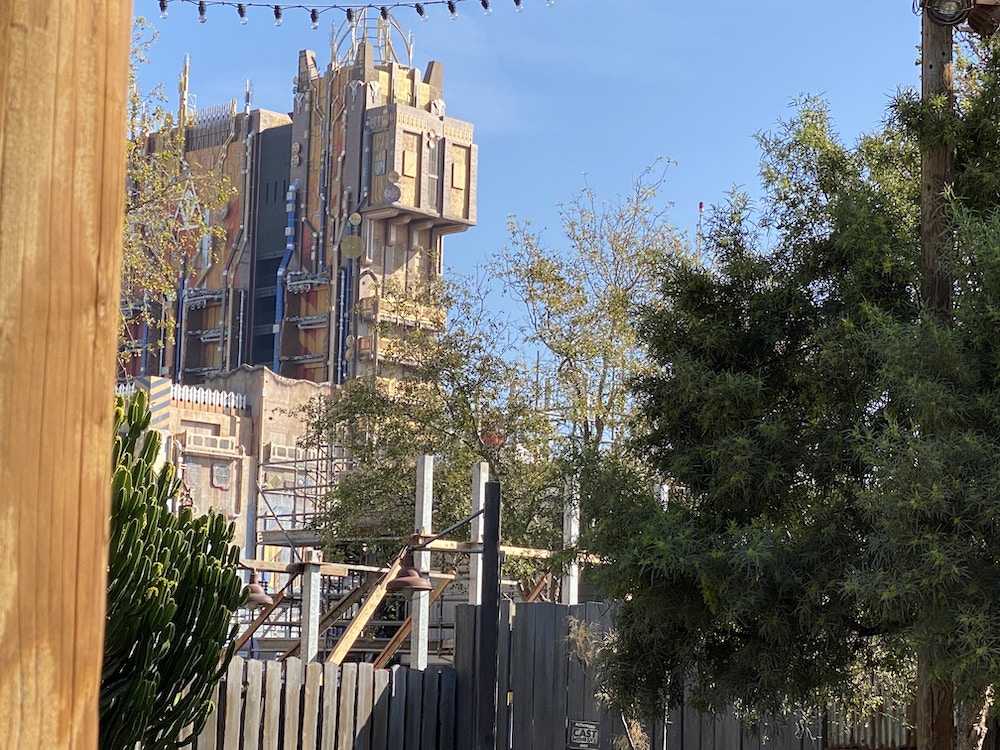 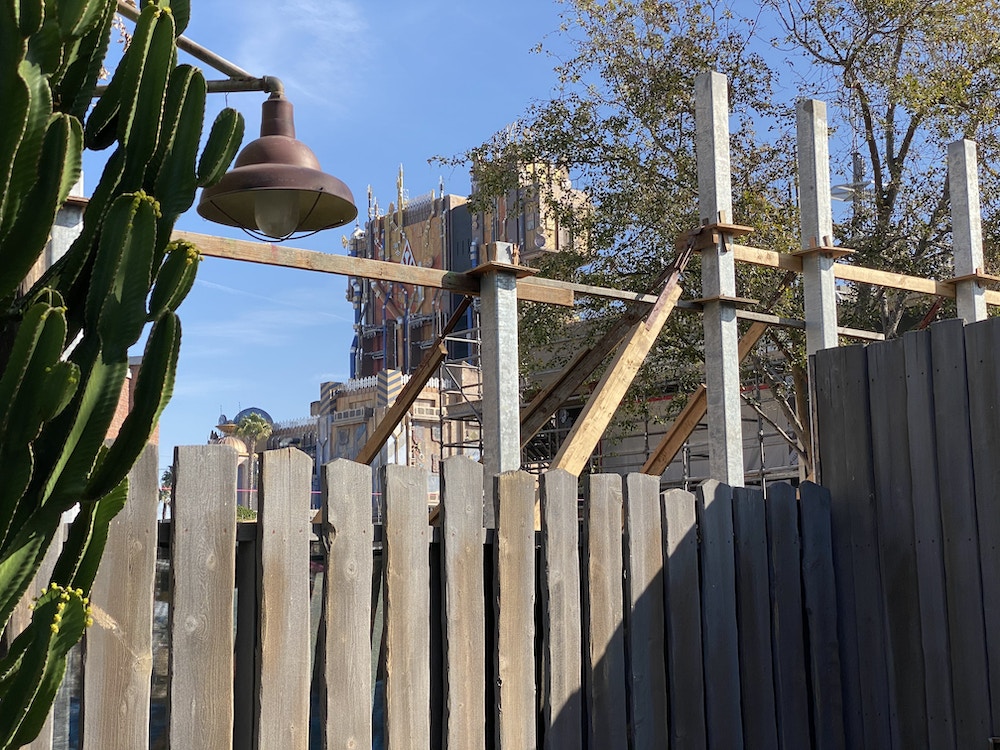 You may have seen our gripe a few weeks ago about how construction on the new Avengers area is imposing on Cars Land. If camouflage is actually what the small structure is designed for, then we’ll happily welcome it! But we’ll have to wait and see.