New Book “The Disney Monorail: Imagineering a Highway in the Sky” Set to Release September 1st 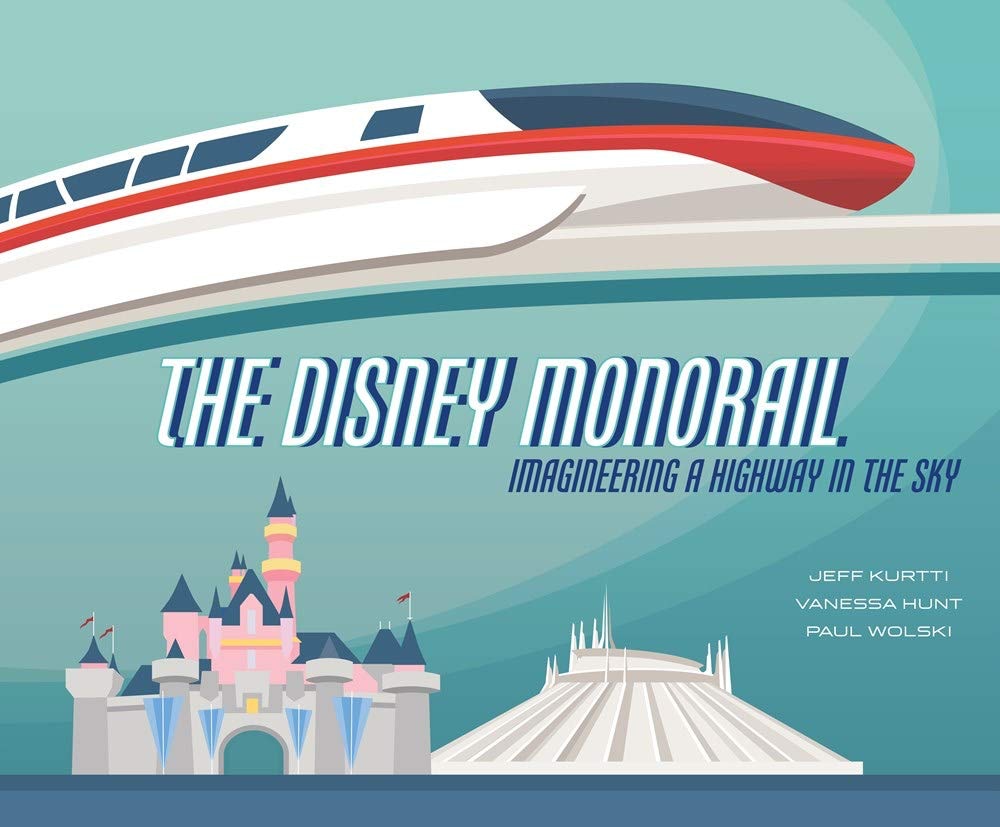 The book, The Disney Monorail: Imagineering a Highway in the Sky, by Jeff Kurtti, Vanessa Hunt, and Paul Wolski, looks back at the creation of the Disney monorail and its impact on transportation systems across the globe.

All aboard a lavish visual celebration of one of Disney’s most iconic and beloved creations: the Disney Monorail. Through a lively and succinct narrative and a stunning collection of unique historical photographs and rare concept and development art (much of it never before published) readers will be transported through the imagination of one of the great twentieth century geniuses, and into a future where yesterday’s dreams are tomorrow’s realities!

Walt Disney is renowned as a cartoonist, filmmaker, showman, and entertainment icon. But he was also a far-sighted futurist, a transportation buff with practical roots in the past, and visionary sights set on the future. In imagining his Disneyland park, Walt saw it not only as a destination for diversion and entertainment, but also as a means of presenting practical demonstrations of new ideas and new technology with real-world applications. As Walt said, “Tomorrow offers new frontiers in science, adventure, and ideals . . . and the hope for a peaceful and unified world.”

In The Disney Monorail: Imagineering a Highway in the Sky, readers will discover the parallel stories of the development of a new form of transportation and the evolution of Walt’s prophetic creative mind, which resulted in the first daily operating monorail in the Western Hemisphere. From that day in June 1959, this mid-century modern marvel has captured the hearts and imaginations not only of theme park and Disney fans everywhere. It has also inspired, as Walt had hoped, the creation of working monorails in practical transit applications in varied locations all around the world.

And if you want to know more about the authors, here are their official bios:

JEFF KURTTI is a leading authority on The Walt Disney Company, its founder, and its history. He is the author of more than thirty books, a writer-director of award-winning documentary content, and a respected public speaker. A Seattle native, he worked for Walt Disney Imagineering and the Corporate Special Projects department of Disney. He was creative director, content consultant, and media producer for The Walt Disney Family Museum in San Francisco and a producer of The Boys: The Brothers Story, a critically acclaimed documentary about the famed songwriters.

VANESSA HUNT is a Walt Disney Imagineer and a lifelong Disney aficionado. Her education is in art history, and she is part of the group responsible for the more than 160,000 pieces of original artwork preserved in the Walt Disney Imagineering Art Collection. She has been curator of several Imagineering exhibits featuring many of the works from the Art Library collection, and has consulted for The Walt Disney Family Museum. Vanessa is also the coauthor of the wildly popular Poster Art of the Disney Parks (2012) and Maps of the Disney Parks (2016) as well as the designer on Marc Davis in His Own Words: Imagineering the Disney Theme Parks (2019).

PAUL WOLSKI is a graphic designer, creative director, and illustrator whose career began in environmental graphics with Walt Disney Imagineering. He served as character illustrator for all signage in Mickey’s Toontown at Disneyland and provided character graphics for Tokyo Disneyland and Disney’s Hollywood Studios. After two decades of working in publishing and retail design, Paul has returned to Disney as a book designer, collaborating with Jeff Kurtti on From All of Us to All of You: The Disney Christmas Card (2018) and working with Vanessa Hunt on Marc Davis in His Own Words: Imagineering the Disney Theme Parks (2019).

What attraction would you like to see get its own making-of book next? Let us know in the comments below!

“Marc Davis in His Own Words: Imagineering the Disney Theme Parks” to Release September 3rd, 2019

PHOTOS: Take a Look Inside The New “One Day at Disney” Book, Now Available at Walt Disney World