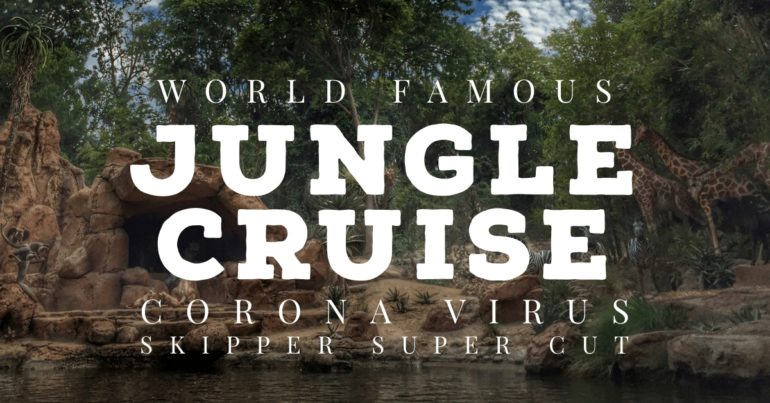 Is anyone else out there really missing Jungle Cruise right now? (Okay, maybe not the people from the sinking boat.) With the parks around the world closed and many of us stuck in quarantine, you’re no doubt finding yourself dreaming of your favorite rides. With the amazing Adventureland Day now behind us, and the Jungle Cruise movie still a bit too far out of reach in the future, we needed some cringy-yet-brilliant belly laughs and dad jokes to keep spirits high and see us through these difficult times.

Thankfully, our friend Freddy Martin has come to the rescue. He has assembled a crew of Skippers, past and present, from both the Jungle Cruise rides in Disneyland and Magic Kingdom, and you know that can only mean one thing. Together, they have created a laugh-out-loud video of their best deadpan one-liners, and we can’t wait for you to see it. Behold, “the stupendous, the 8th wonder of the world… The World Famous Jungle Cruise: Quarantined Skipper Super Cut!“

We hope you enjoyed that much-needed comic relief. We loved seeing how skippers are working their hardest to keep the magic of the jungle alive, even while the parks are closed! Freddy Martin listed the full cast list in order of appearance on his video post:

Cast (in order of appearance):

If you have been having fun re-creating or putting your own fun spin on attractions from the comfort of your own homes, let us know! We’d love to see them!

While you’re dreaming of adventure, definitely check out the amazing styles and smiles in our photo report from this year’s third annual Adventureland Day in the Magic Kingdom. You can also have a listen to our Dreamfinders podcast episode from earlier this month, where Skipper David John Marley took us through the history and humor of Jungle Cruise.