With Disney Parks around the world closed for the foreseeable future, WDWNT is dipping into our archives of vintage materials for a look back into Disney history! And this one is a treat for lovers of Disney in the 1960’s, as we take a look at the Walt Disney Productions 1965 Annual Report! 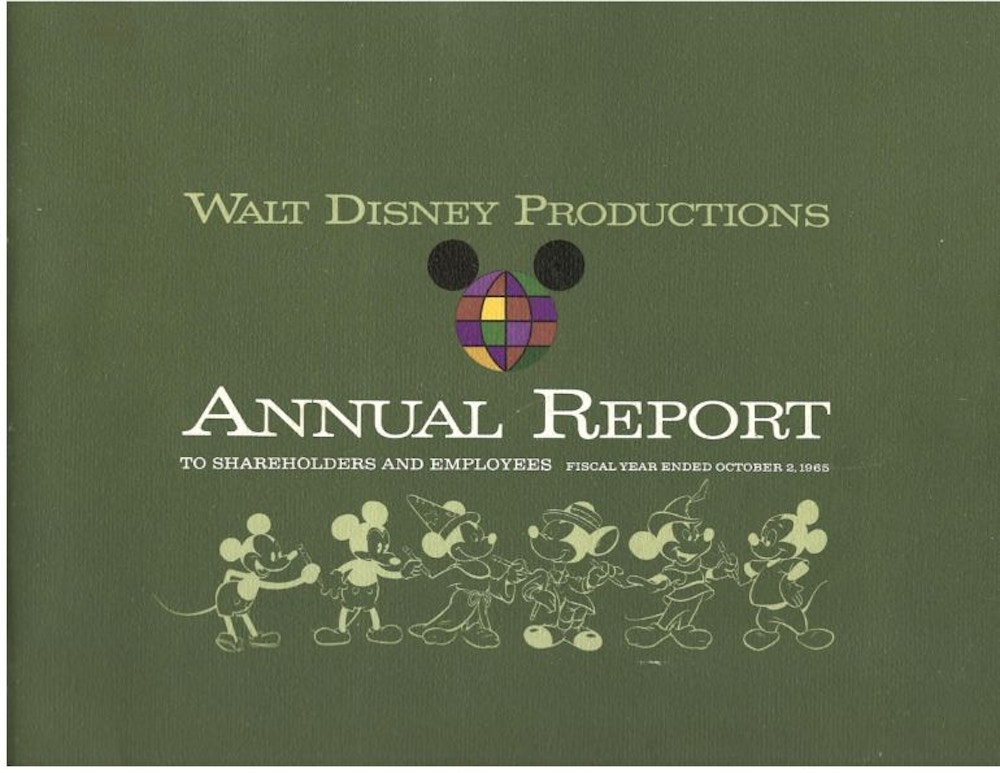 As you can see, Mickey Mouse has been celebrated through the years for decades! And he is still just as beloved today. 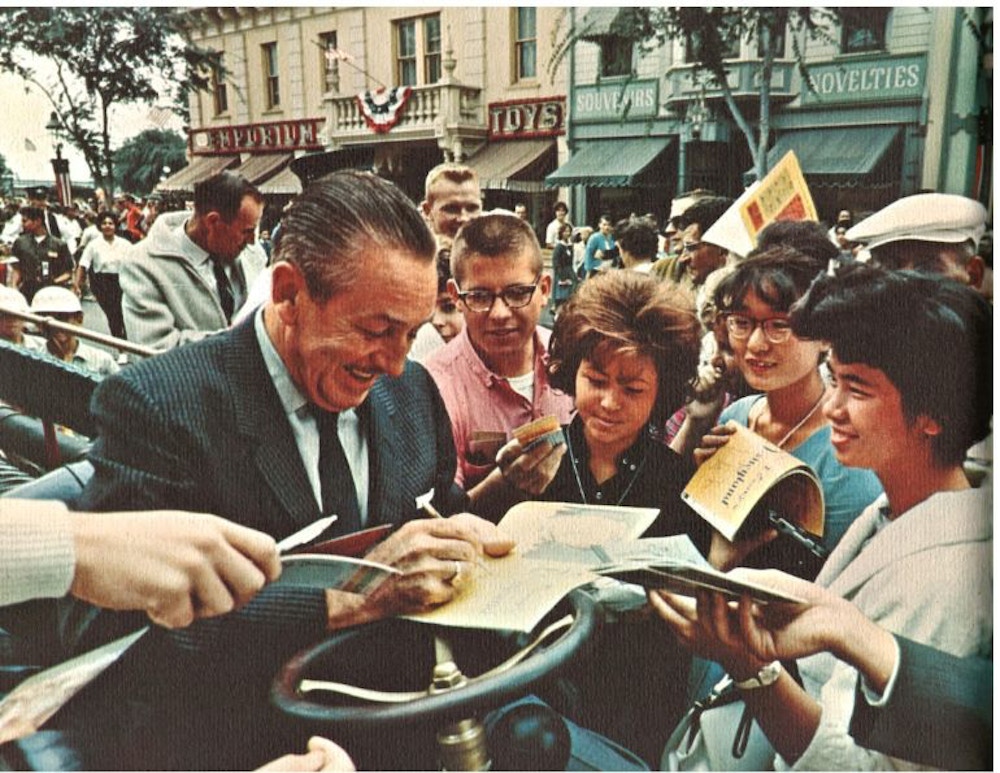 While Mickey may have the cover, it’s only fitting that Walt Disney would get the big photo spread to welcome you into the report. 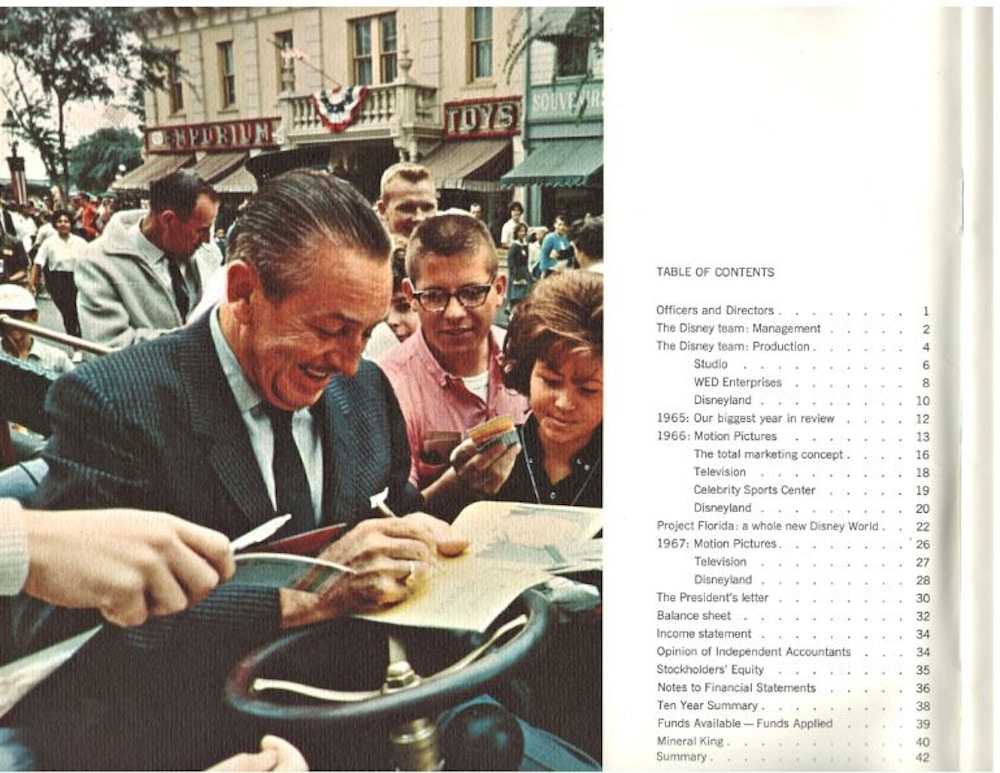 The report was released to company shareholders and employees in early 1966 ahead of its annual meeting. This looks back at the company’s work in 1965, and a look ahead at things to come in 1966 and 1967. As you can see on the Table of Contents, there’s a 4 page entry detailing “Project Florida: a whole new Disney World.” 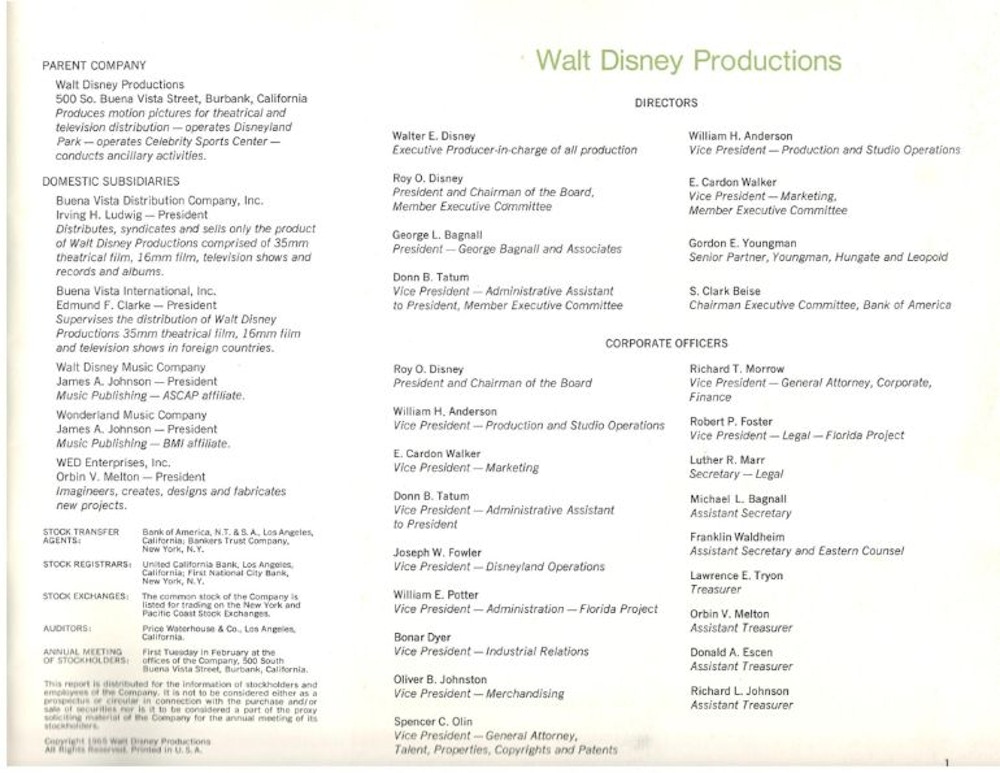 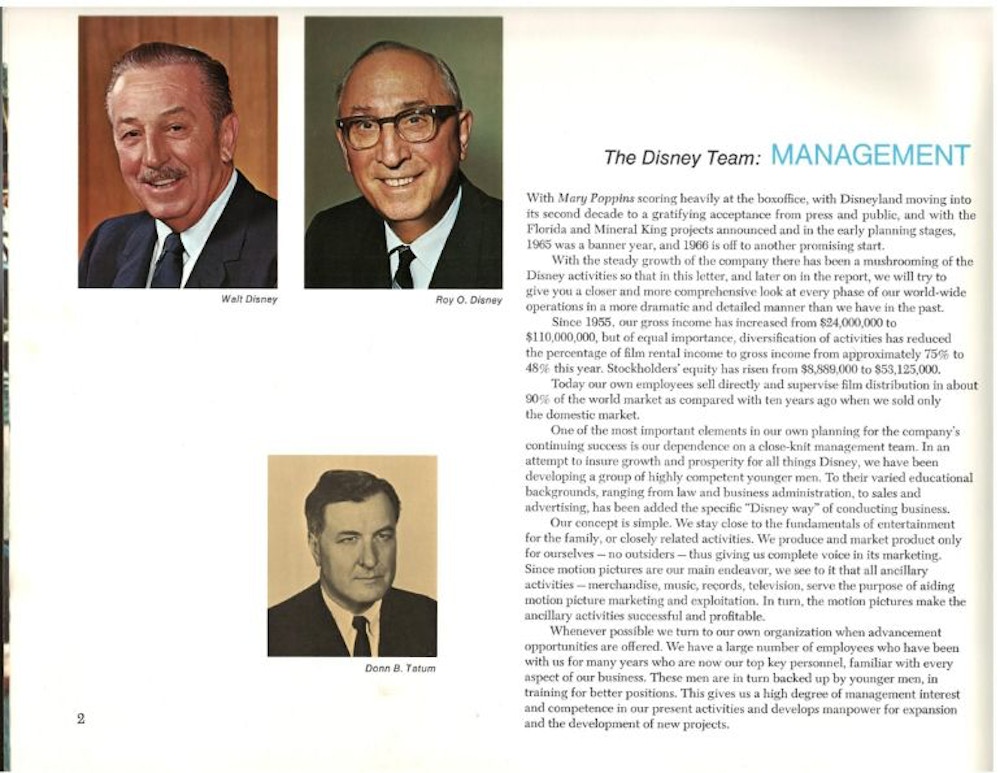 The Management section features a letter from Roy, humbly discussing the “Disney way” that the company conducts its business, and includes a reference to the abandoned Mineral King resort. 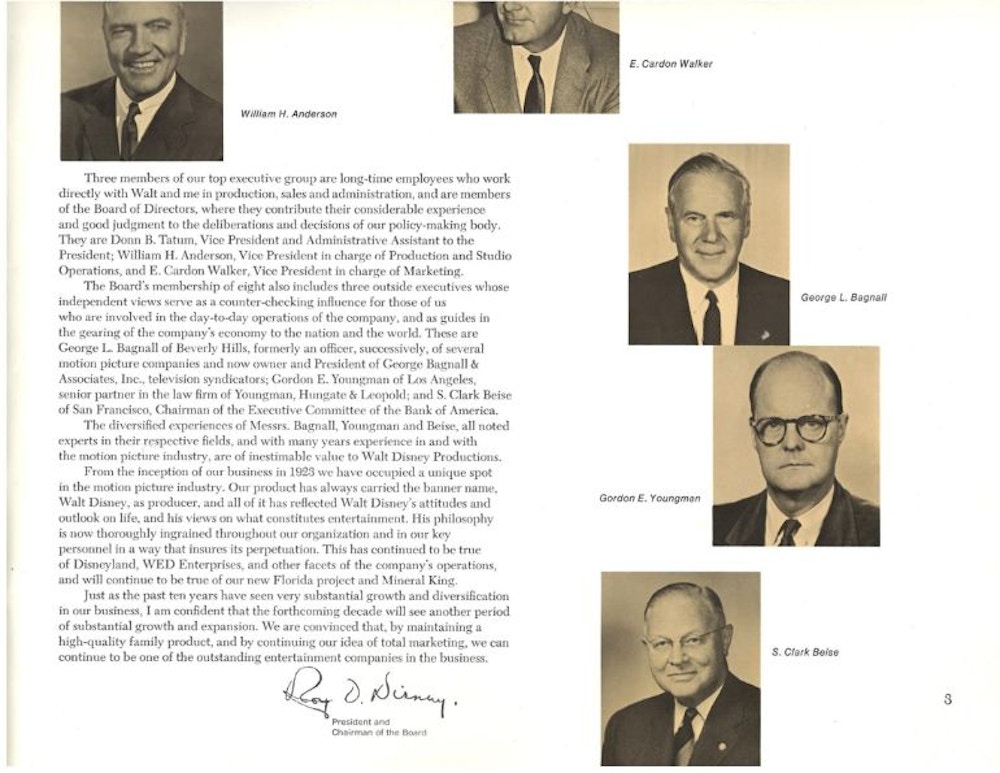 I love this passage from Roy:

“From the inception of our business in 1923 we have occupied a unique spot in the motion picture industry. Our product has always carried the banner name, Walt Disney, as producer, and all of it has reflected Walt Disney’s attitudes and outlook on life and his views of what constitutes entertainment. His philosophy is now thoroughly ingrained throughout our organization and in our key personnel in a way that insures its perpetuation. This has continued to be true of Disneyland, WED Enterprises, and other facets of the company’s operations, and will continue to be true of our new Florida project and Mineral King.

Just as the past ten years have seen very substantial growth and diversification in our business, I am confident that the forthcoming decade will see another period of substantial growth and expansion. We are convinced that, by maintaining a high-quality family product, and by continuing our idea of total marketing, we can continue to be one of the outstanding entertainment companies in the business.” 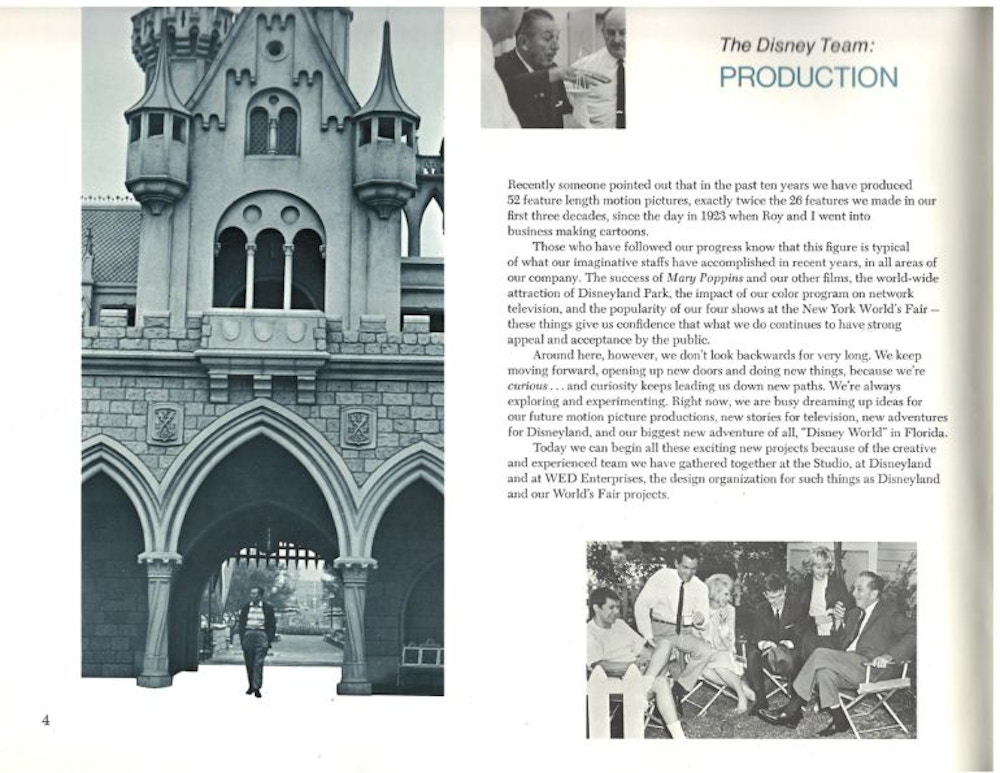 Then Walt himself discusses production. And this is a special document for Walt fans, as it features his famous quote: “Around here, however, we don’t look backwards for very long. We keep moving forward, opening up new doors and doing new things, because we’re curious… and curiosity keeps leading us down new paths.”

There’s an insert on the page below about Walt’s Role, “Responding to a question posed by the National Geographic, Walt Disney described in this way his role as the company’s creative catalyst: “You know, I was stumped one day when a little boy asked, ‘Do you draw Mickey Mouse?’ I had to admit I do not draw anymore. ‘Then you think up all the jokes and ideas?’ ‘No,’ I said, ‘I don’t do that.’ Finally, he looked at me and said, ‘Mr. Disney, just what do you do?’ ‘Well,’ I said, “sometimes I think of myself as a little bee. I go from one area of the studio to another and gather pollen and sort of stimulate everybody.’ I guess that’s the job I do.” 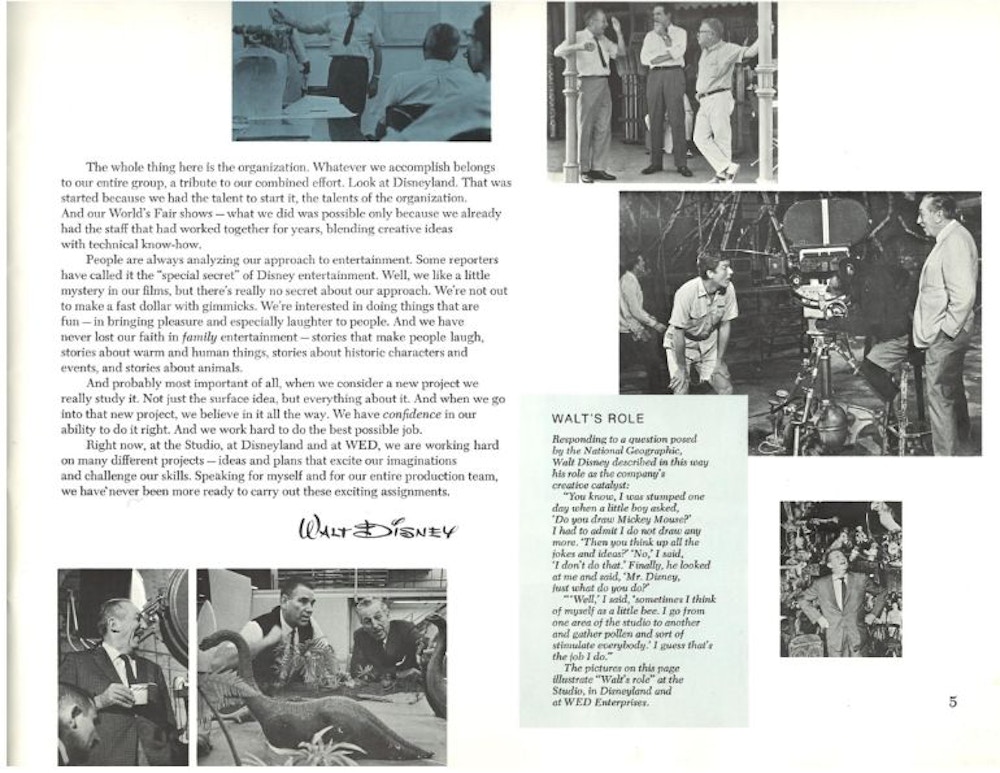 Another great Walt quote follows, explaining why he feels the company has become a success:

“People are always analyzing our approach to entertainment. Some reporters have called it the ‘special secret’ of Disney entertainment. Well, we like a little mystery in our films, but there’s really no secret about our approach. We’re not out to make a fast dollar with gimmicks. We’re interested in doing things that are fun – in bringing pleasure and especially laughter to people. And we have never lost our faith in family entertainment – stories that make people laugh, stories about warm and human things, stories about historic characters and events, and stories about animals.

And probably most important of all, when we consider a new project we really study it. Not just the surface idea, but everything about it. And when we go into that new project, we believe in it all the way. We have confidence in our ability to do it right. And we work hard to do the best possible job.” 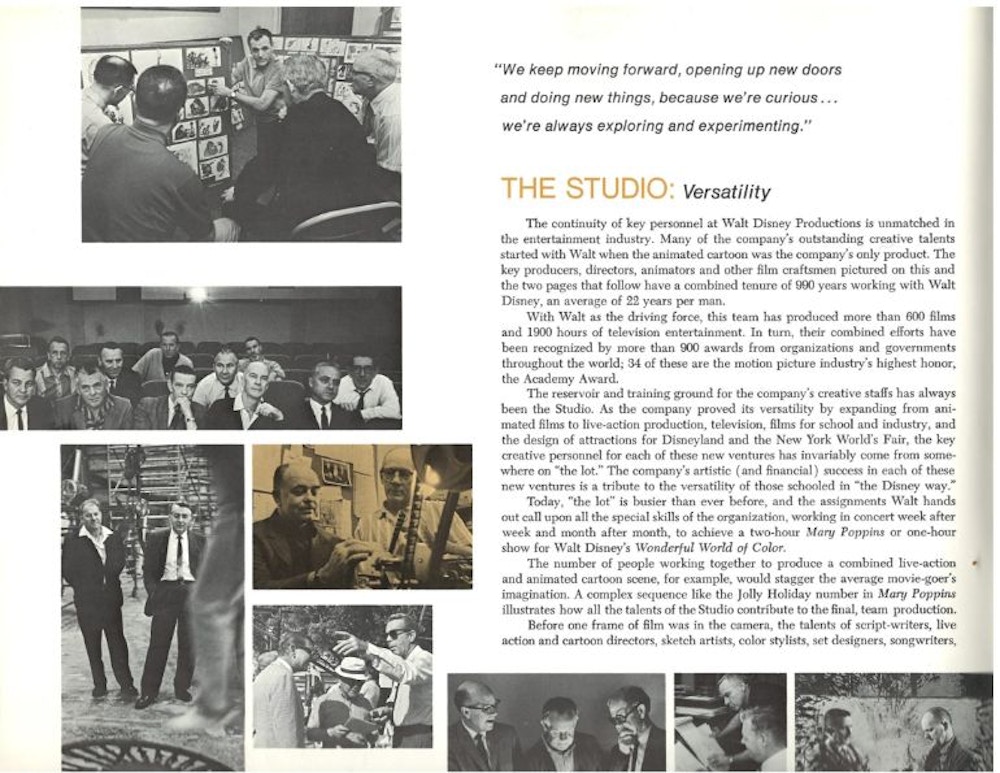 This next section discusses what goes on at the Disney studio, describing the filming and animation process behind the “Jolly Holiday” sequence in Mary Poppins. 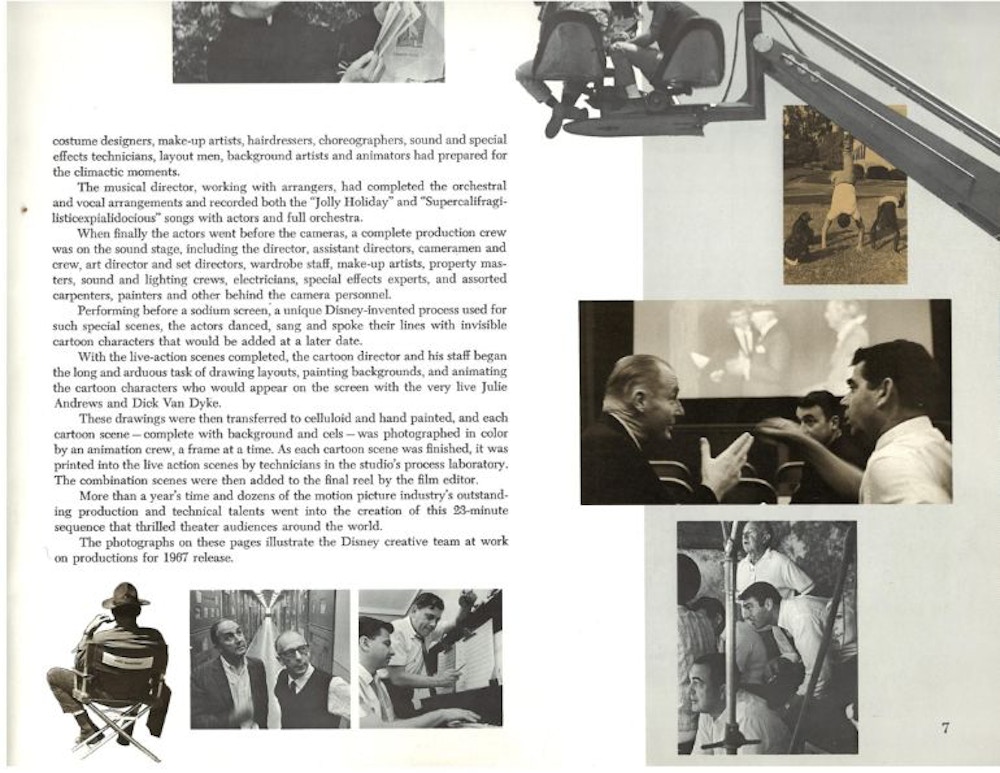 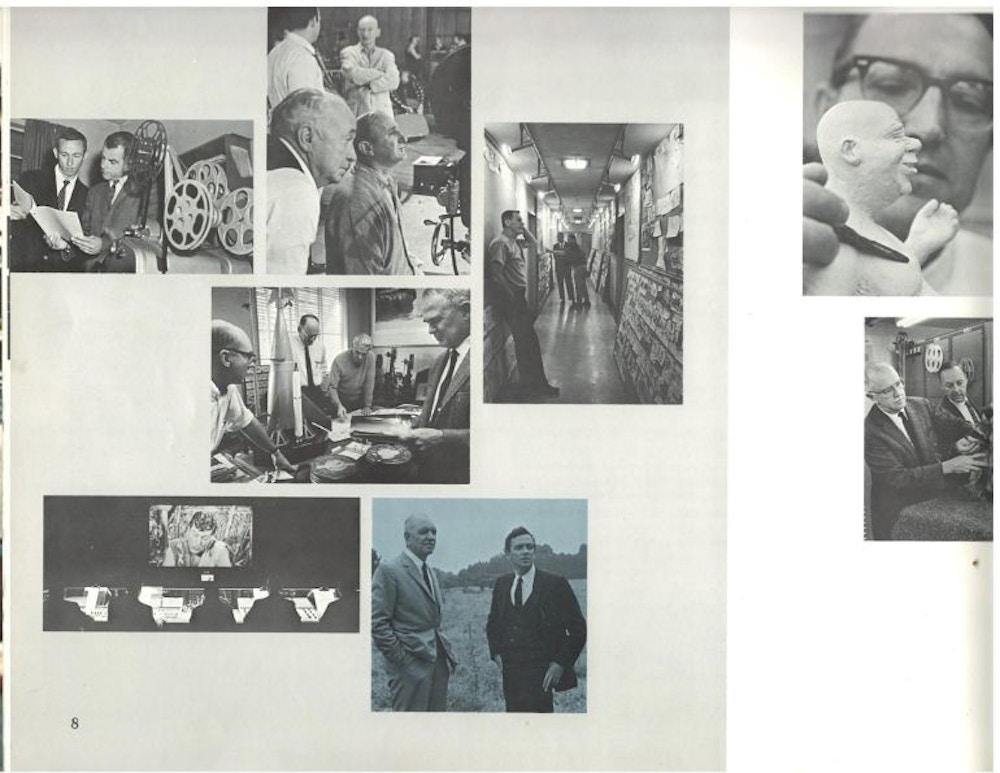 Parks fans, this is for you, as we take a visit to the newly-acquired WED Enterprises (remember, it was originally separate from Walt Disney Productions) and see what the Imagineers are working on, including Disneyland’s New Orleans Square, Pirates of the Caribbean, and It’s a Small World. There’s even a tease for the PeopleMover coming to Disneyland! 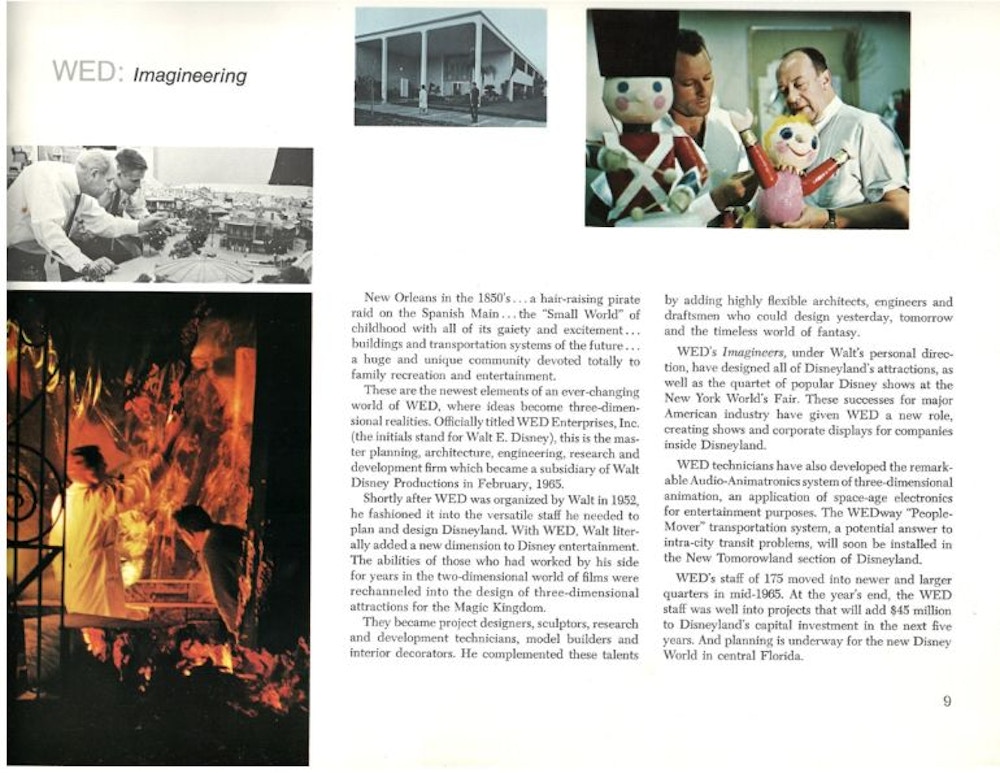 We then move to Disneyland itself, focusing on its management training, as well as its success in terms of attendance in the ten years it had been open.

The first paragraph reads, “No one ever built a ‘Disneyland’ before Walt did it. It took personal and corporate courage to go ahead despite widespread predictions that Disneyland would be a ‘Hollywood spectacular’, – a spectacular failure.” It’s safe to say, and proven with the amount of people missing Disneyland during this extended park closer, that it was anything but a failure. 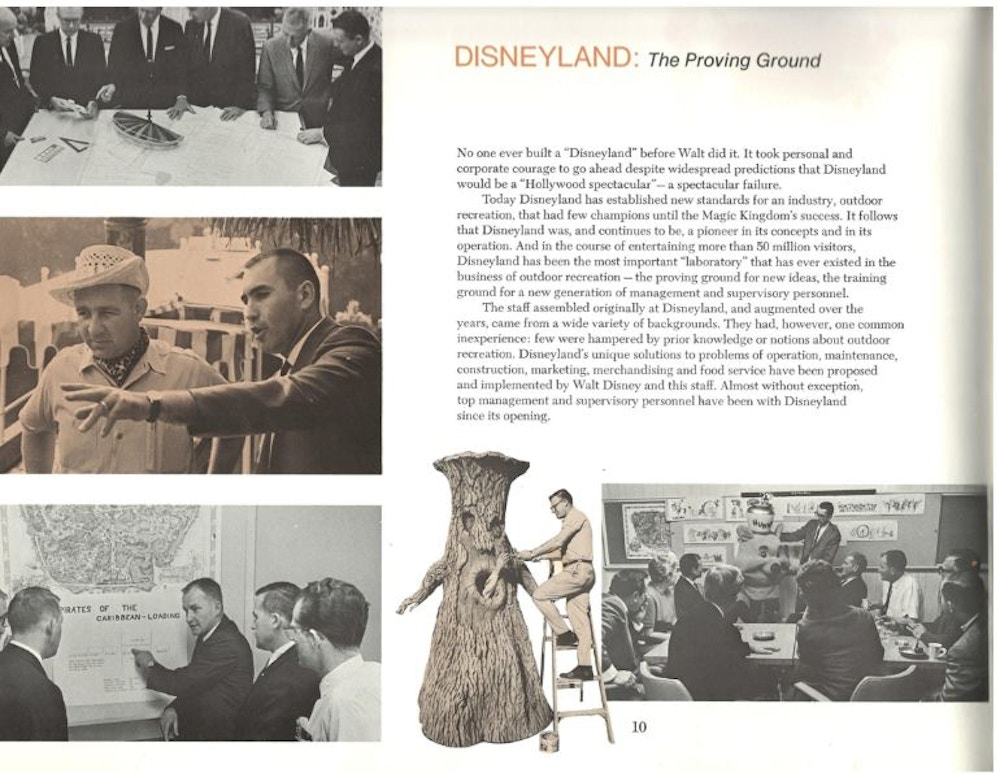 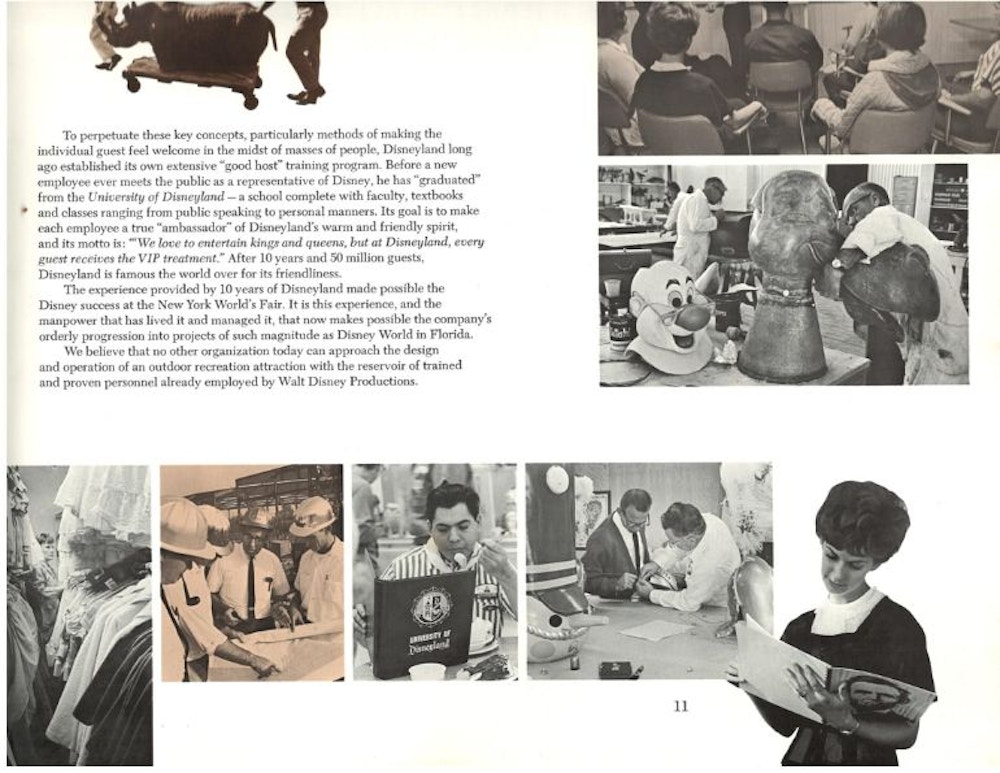 We close out part one of this series with a look back at Disney’s highlights in 1965. In film, Mary Poppins was still going strong as it ran in theaters across the United States and Canada, as well as its debut in international markets including Europe, South and Central America, Africa, Australia, the Middle East, and Japan. Disneyland celebrated its Tencennial, with over six million visitors visiting the park for the first time in its history, and marked the openings of Great Moments with Mr. Lincoln and the Plaza Inn. In New York, the second year of the 1964-65 World’s Fair wrapped up its run with a whopping 91% of fair visitors visiting the four Disney attractions over the two years. 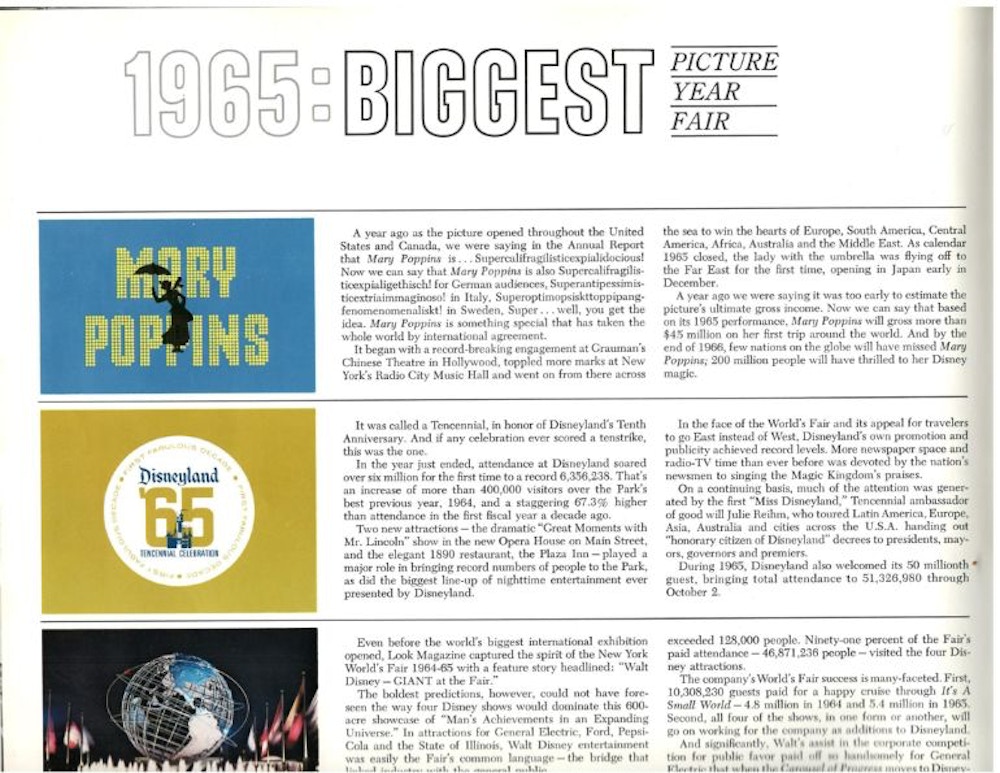 What was the company prepared to show the world in 1966? Keep reading WDWNT for the second part of the 1965 Annual Report!