Ma chère mademoiselle… it is with deepest pride and greatest pleasure that we welcome you tonight! And now, we invite you to relax. Let us pull up a chair as the dining room proudly presents… your dessert! Readers familiar with my reviews always ask me what my background in food is, and while I’m no Chef Bouche (aka the angry stove from Beauty and the Beast), I do enjoy whipping up treats at home as often as I get the chance.

I’m a self-taught baker after having grown up in a house where “dessert” was considered cream cheese and guava paste on Maria biscuits (it’s a thing), so from an early age, I’ve been baking cakes, cookies, pies, and more to satisfy my meager sweet tooth. From the start of this stay-at-home period, I had lofty ideas of cranking out a recipe a day, but that honor has gone to our staff writer Ted, who’s managed to concoct Blue Milk that actually tastes good, plus an ‘Ohana noodles recipe that’s already proven to be quite popular. So far, I’ve only gotten to posting around a recipe for Mickey Macarons, mainly because I’ve been busy writing comedy roasts, among other essential duties. However, I managed to scrape up some time and make a giant tub of Grey Stuff, and top off some chocolate cupcakes to boot. 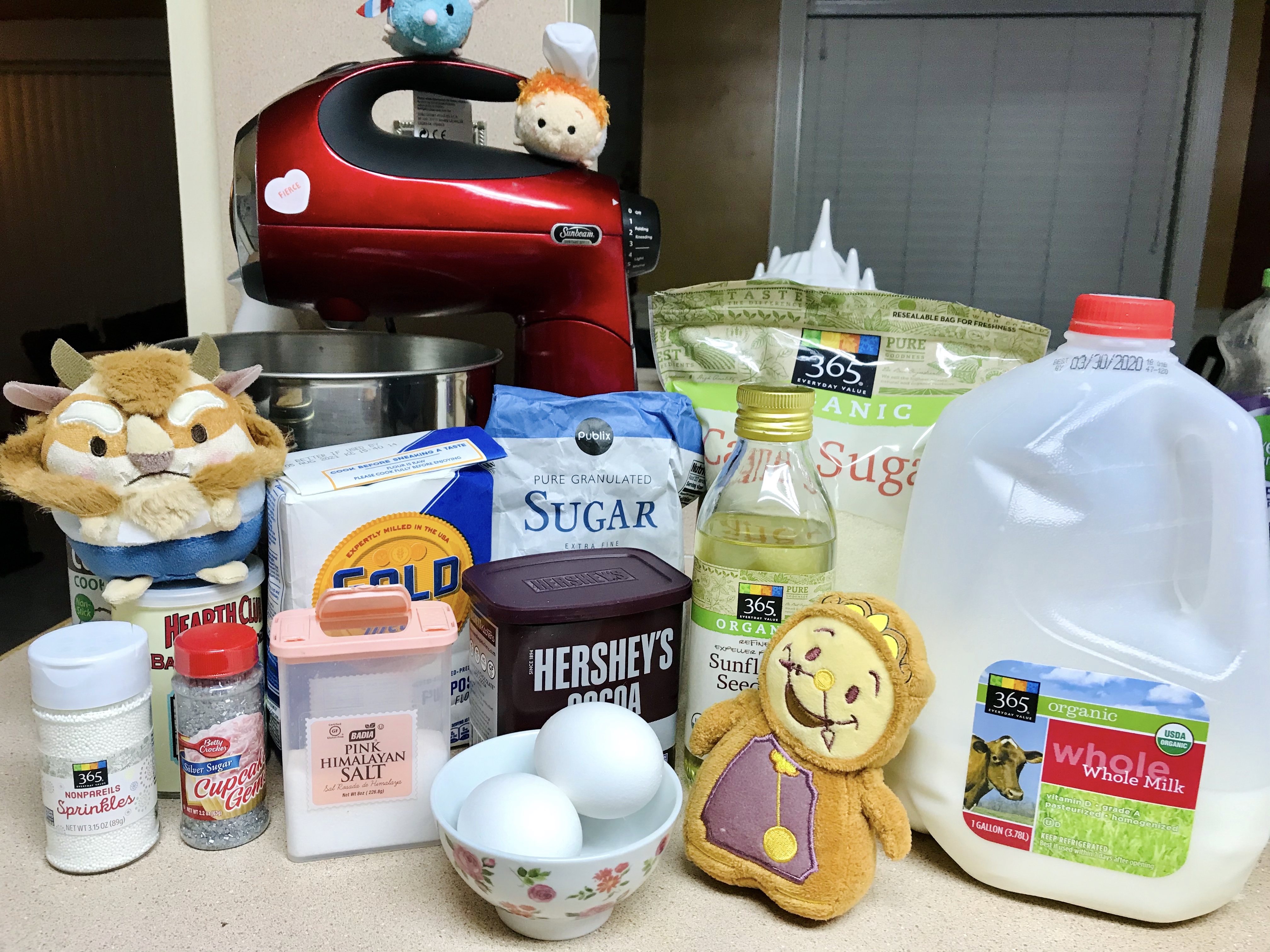 So first off, for the recipes and ingredients I used:

I chose this recipe on the basis that it’s more of a frosting-style Grey Stuff. Most other recipes involved “whipped topping” (like Cool Whip), which I think is the worst thing to ever happen to the dessert world. This one was a pretty straightforward buttercream (butter, powdered sugar, cream) with the addition of crushed Oreos.

You could pretty much use any cupcake or cake recipe here. I opted for a chocolate base to replicate the cupcake that’s served at Be Our Guest in the Magic Kingdom, but you could easily go for a vanilla cake base or even red velvet. If there’s a particular recipe you’re fond of, feel free to use it for this.

Ingredient-wise, feel free to get creative with whatever you have. It took me three tries to order that tiny bag of flour in the photo, but at least I was able to order the sprinkles online too. I had to wait two weeks before sugar finally showed up as an option for ordering, as well. The cupcake recipe called for buttermilk, so I just did the old vinegar-and-milk trick instead. No plush were used in any of the recipes, but they’re in all the photos because they basically run my household. If you wanted to make this vegan, you could just substitute with all plant-based analogues. 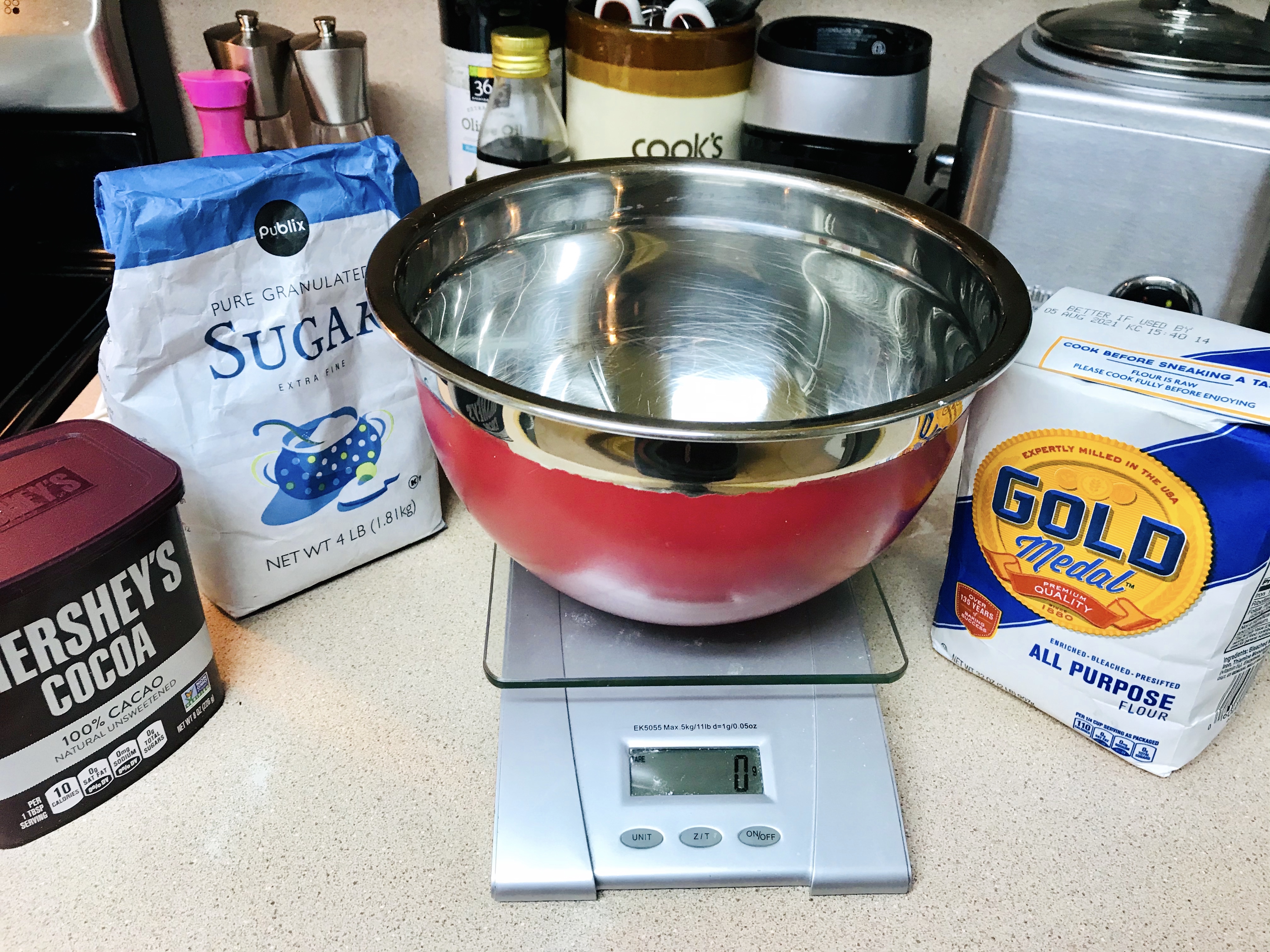 If you’re planning on making these and not just reading this to procrastinate on your work at home, pull up the two recipes above, but note the tips I’m outlining throughout. First off, I cannot stress how much easier it is to weigh your dry ingredients using a kitchen scale. You’ll never end up with overly dry or doughy baked goods, and it reiterates the fact that baking is actually science. In fact, bring the kids in. This is a Beauty and the Beast cupcake lab now. Speaking of dry ingredients, disregard the sugar in this photo. In baking, sugar is considered a wet ingredient due to its emulsifying properties. Only the flour, cocoa powder, and other baking agents (salt, baking soda, baking powder, spices) should go into the dry mix. 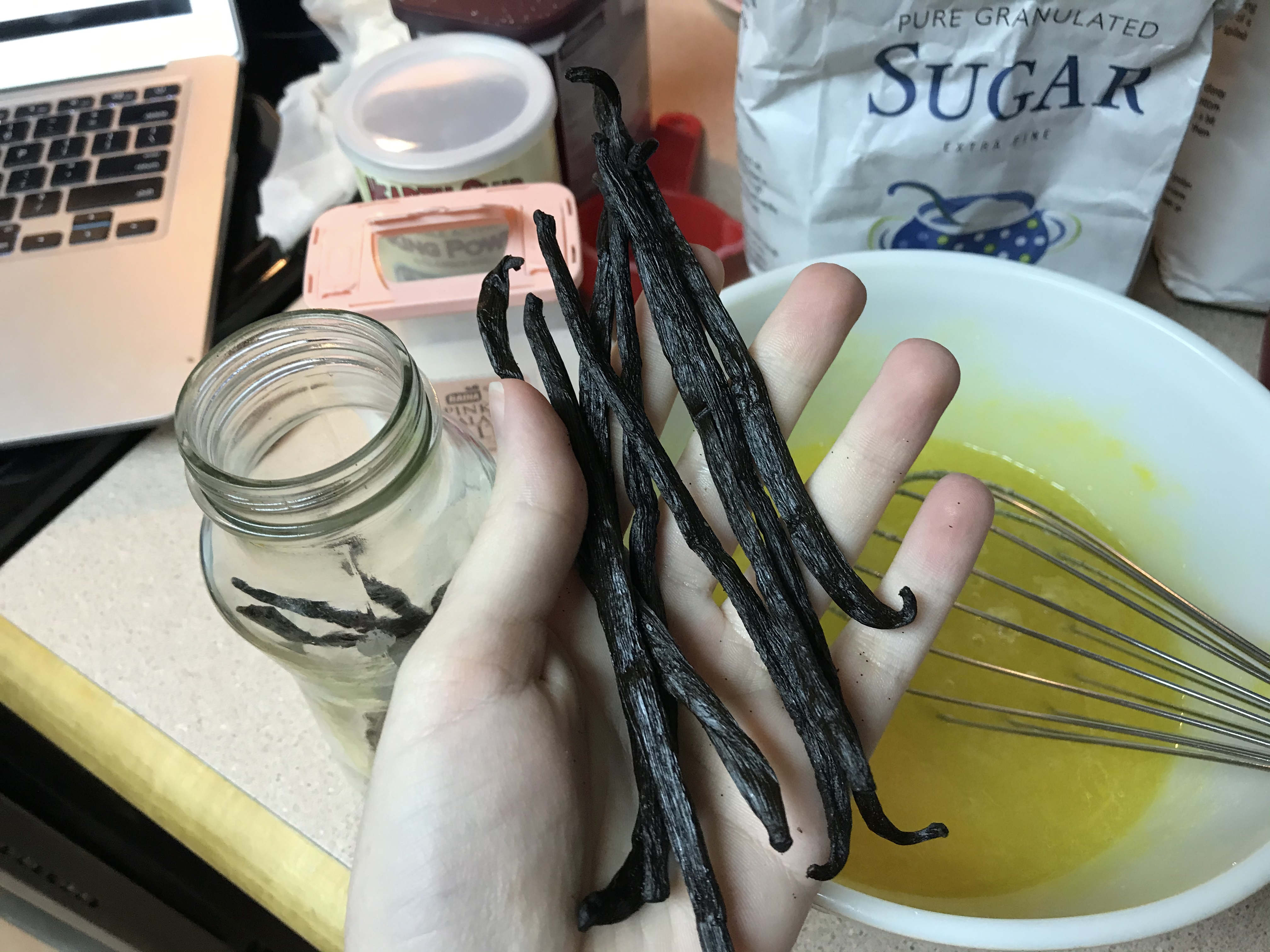 Again, since we’re cooking in quarantine, make do with what you have. I don’t have vanilla extract on hand, but I do have this ancient jar of vanilla bean pods. I took one of these bad boys and scraped all of the innards into the wet mixture. (Someone send me rum so I can make a proper extract out of these!) 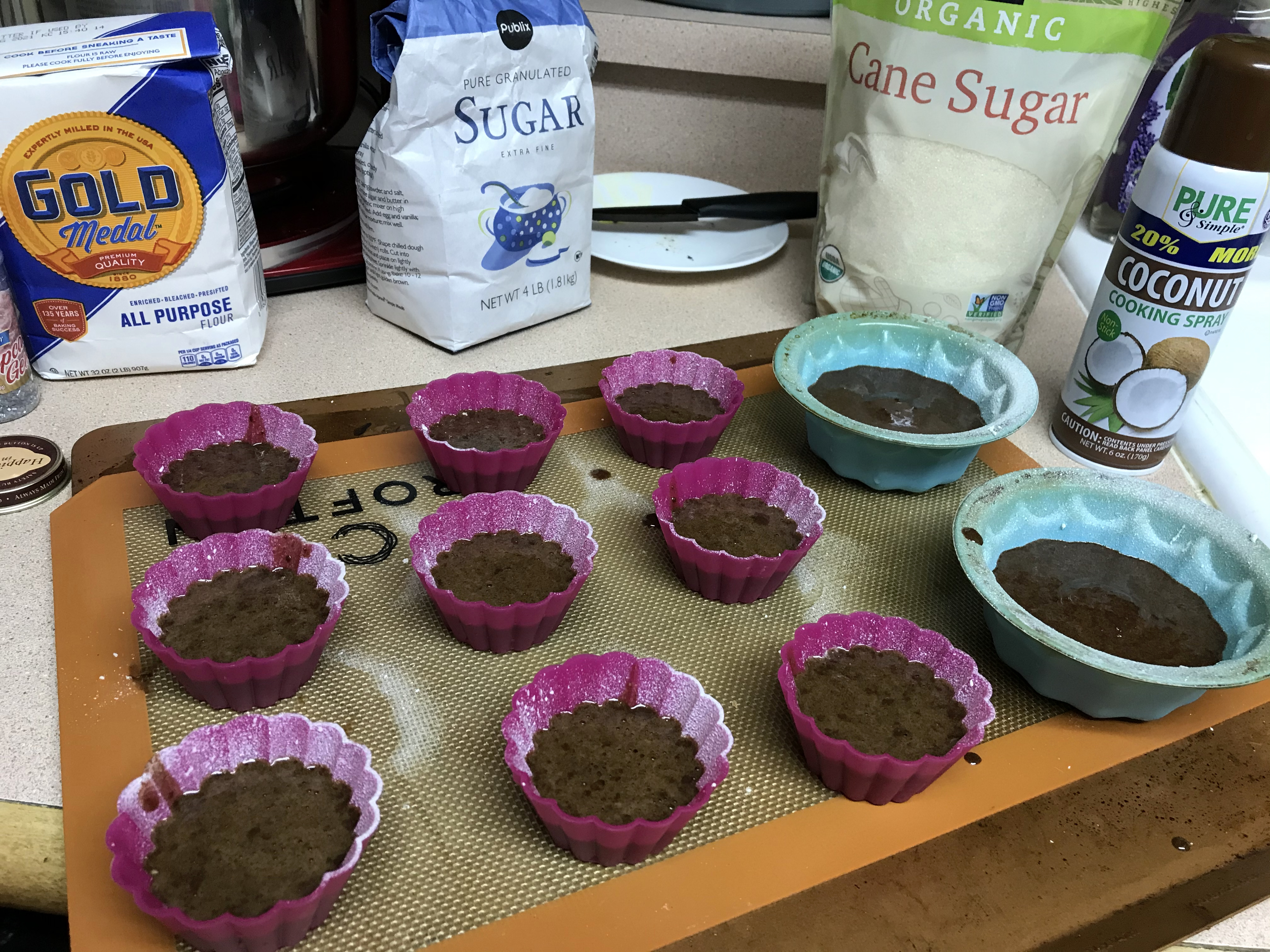 Once my cake batter was ready, I sprayed some silicone baking cups with non-stick cooking spray and filled the cups halfway full per the recipe instructions. I had some extra batter that I also poured into two tiny silicone bundt molds, and a small Pyrex glass bowl for a tiny cake (…more on that later.)

While the cupcakes are baking, I took 8 ounces of butter and ran them through the microwave in 10-second bursts until they were soft and pliable, but not melted. If I were as proficient a baker as I said I was, these would’ve been sitting out to soften earlier in the day, but I digress. Also, all I had was salted butter, so that’s what I used. It might seem odd at first, but with enough powdered sugar and crushed Oreos, you can cut whatever saltiness is present fairly easily. 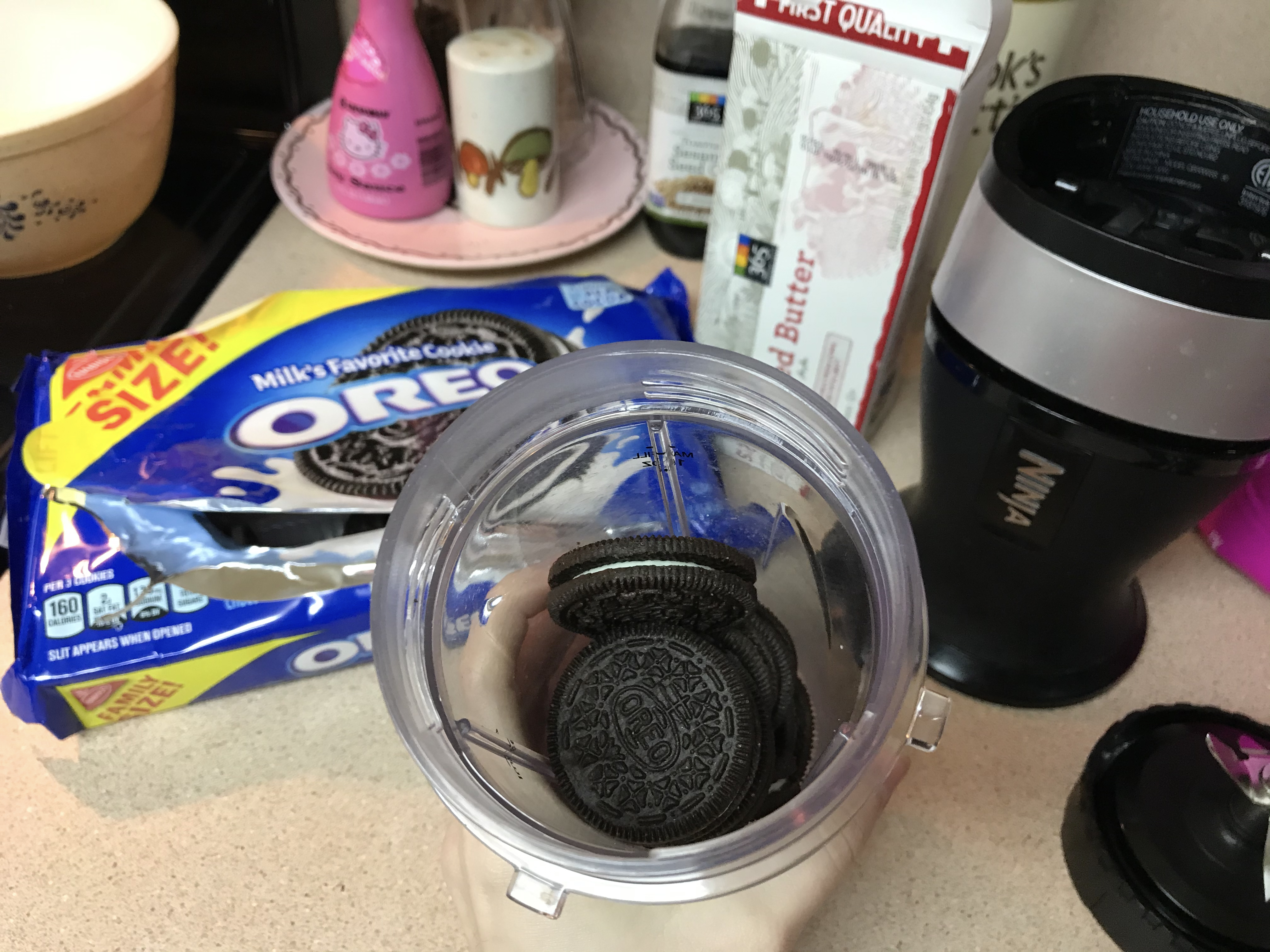 I took about 8 Oreo cookies and proceeded to grind them up in my blender until they were a coarse powder. Make sure no large chunks are present. 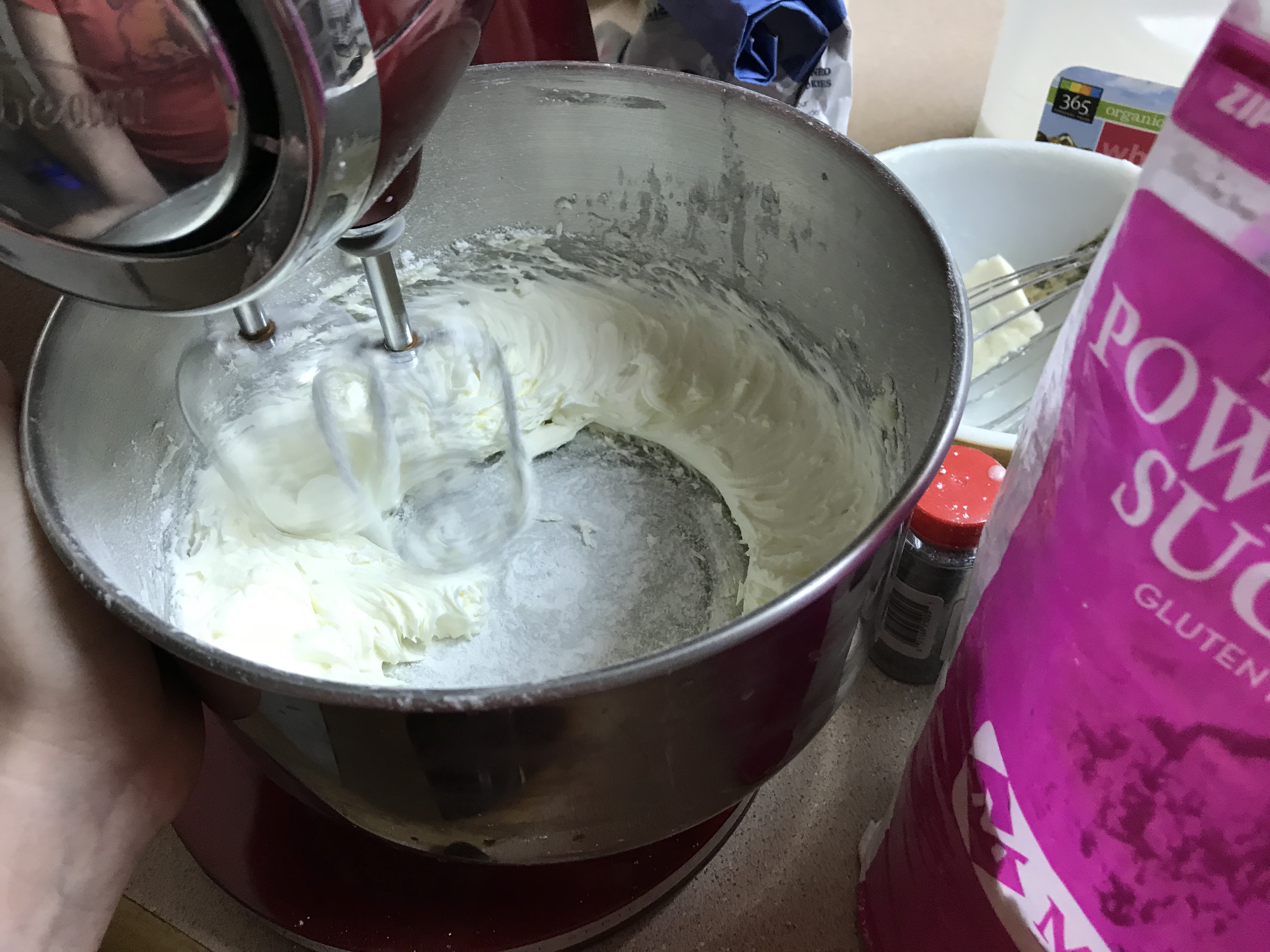 I then took the butter and started whipping it, gradually adding in small sifted scoops of powdered sugar. At first, it might not seem like it’s doing much, but keep adding powdered sugar and letting it aerate. 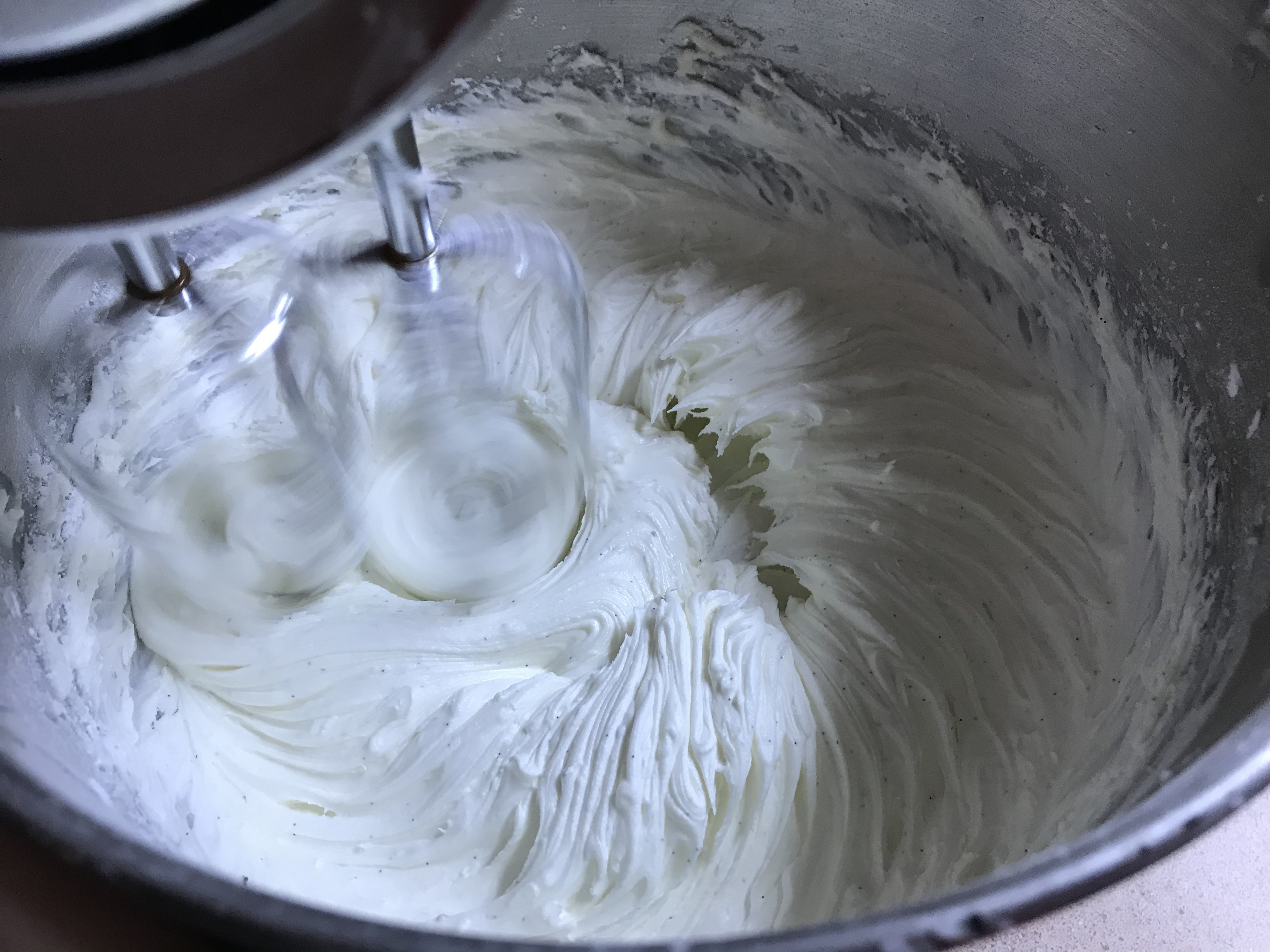 From here, keep whipping it until it’s the consistency you want. Add a tiny spoonful of milk or cream if you want to thin it out some, and keep adding more powdered sugar for body. I had the other half of a vanilla bean lying around, so I scraped the inside of that into the mixture as well. There’s nothing more inexplicably soothing than seeing tiny little vanilla bean flecks in your desserts. Feel free to taste as you go to make sure the flavor is on point, and not too cloyingly sweet. 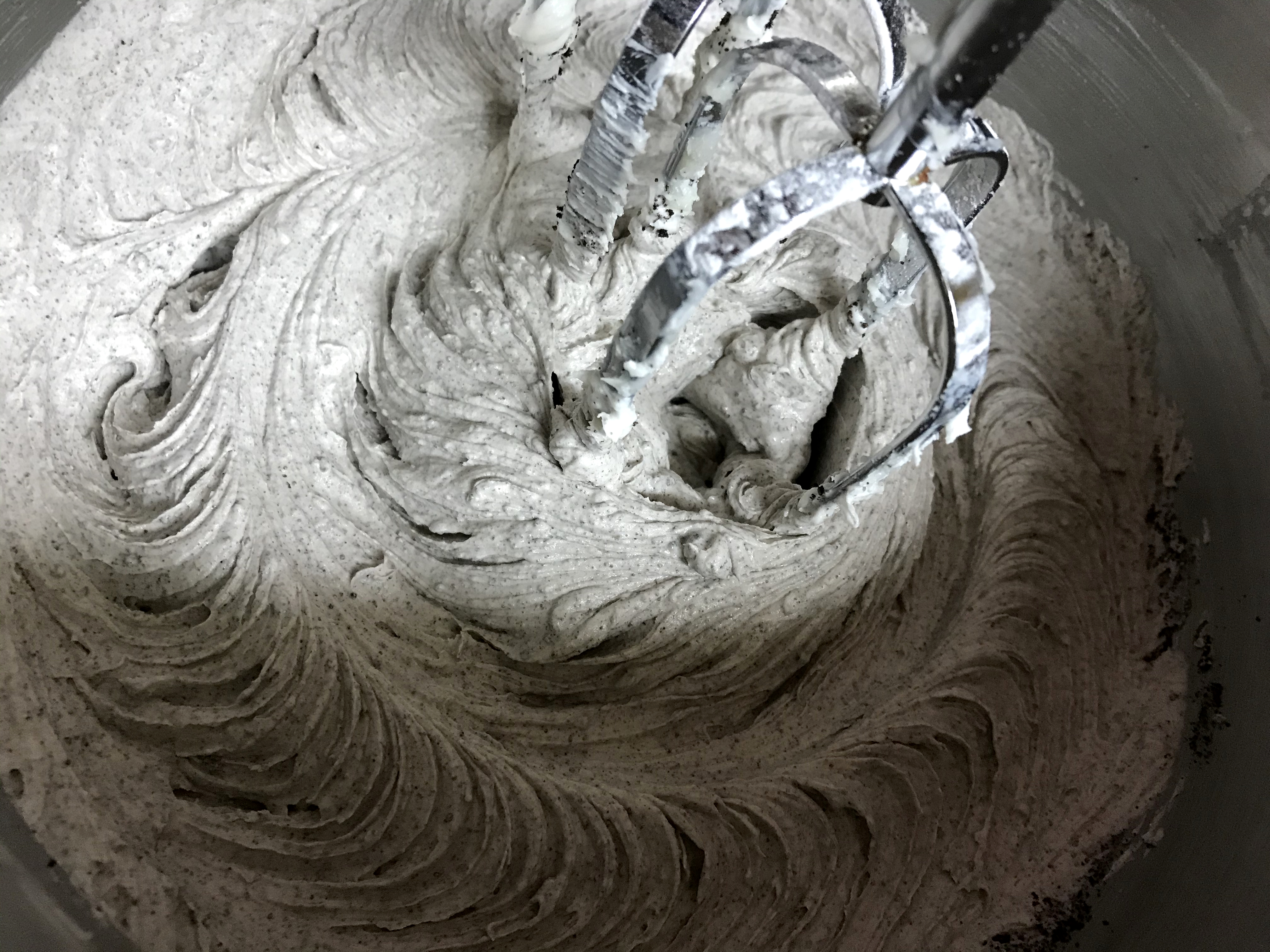 Once the frosting is at the consistency you like, start gradually adding in the Oreo crumbles while the mixer is still going. I added about 3/4 of the crushed Oreos until I had the perfect grey shade I wanted. I half-wondered if this recipe would need grey food coloring to make it work, but the Oreos really work their magic here. 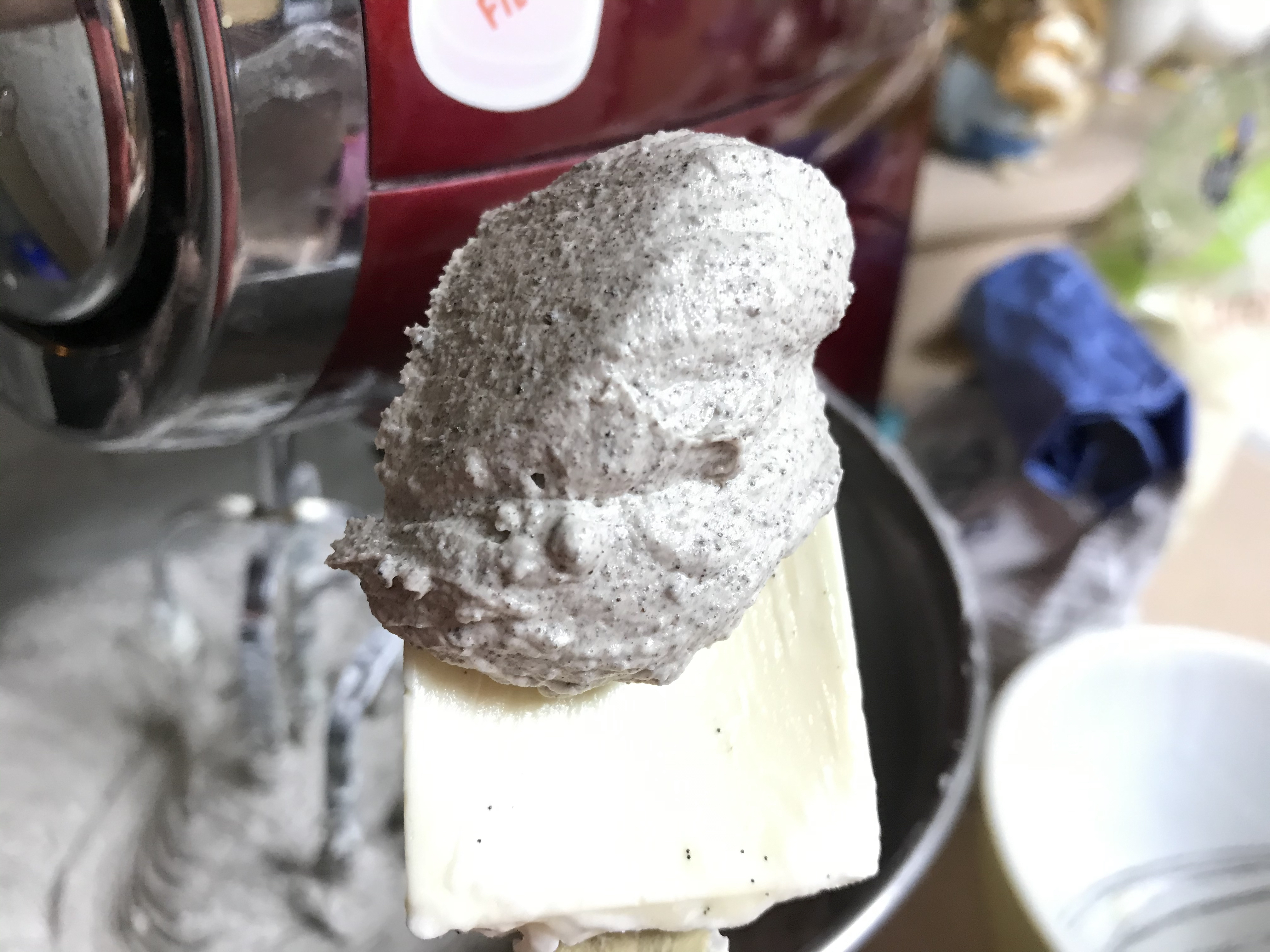 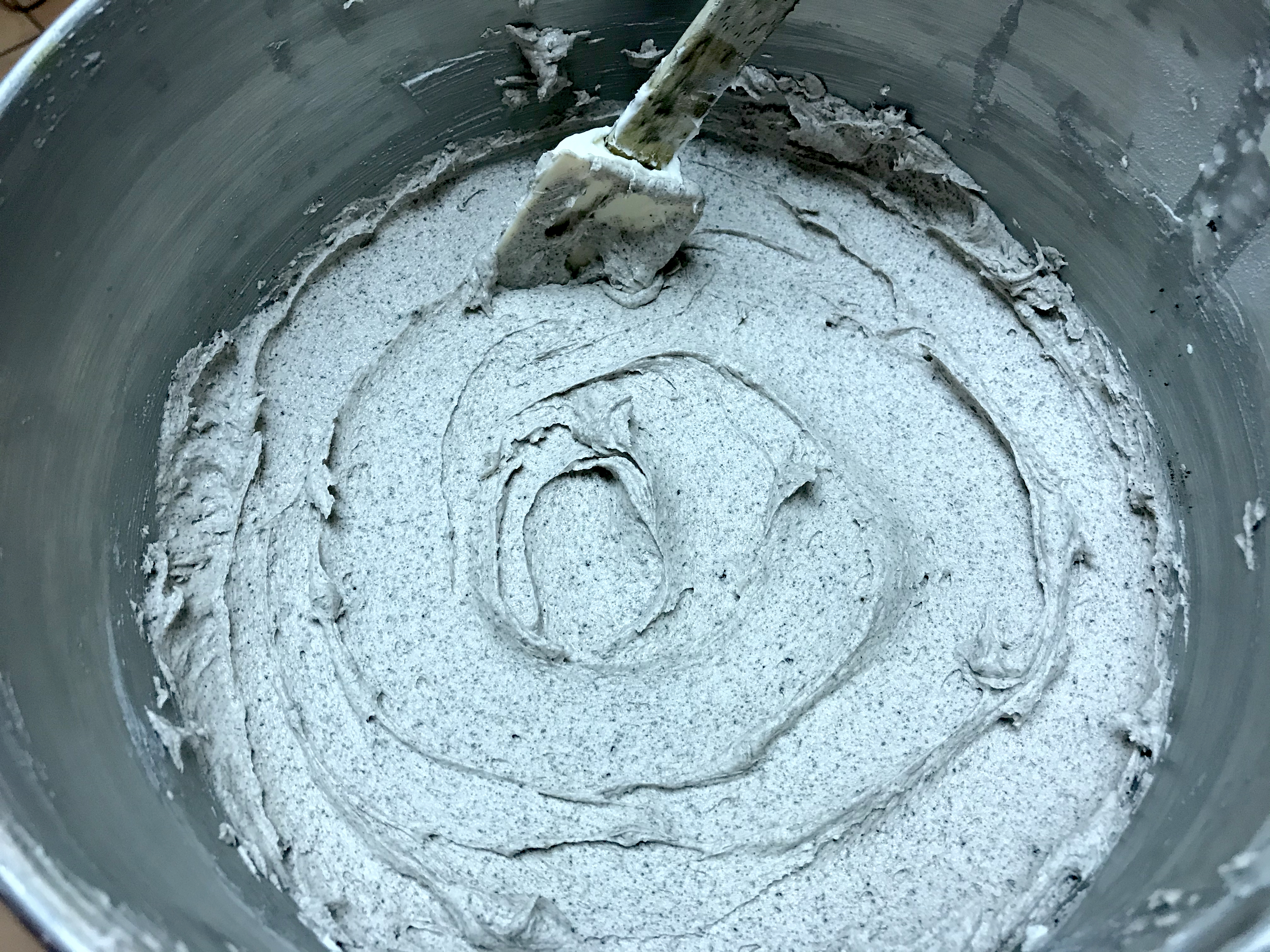 At this point, you now have a giant, delicious vat of Grey Stuff frosting, and your cupcakes will have probably finished baking by now. Congrats! Now, for the assembly. 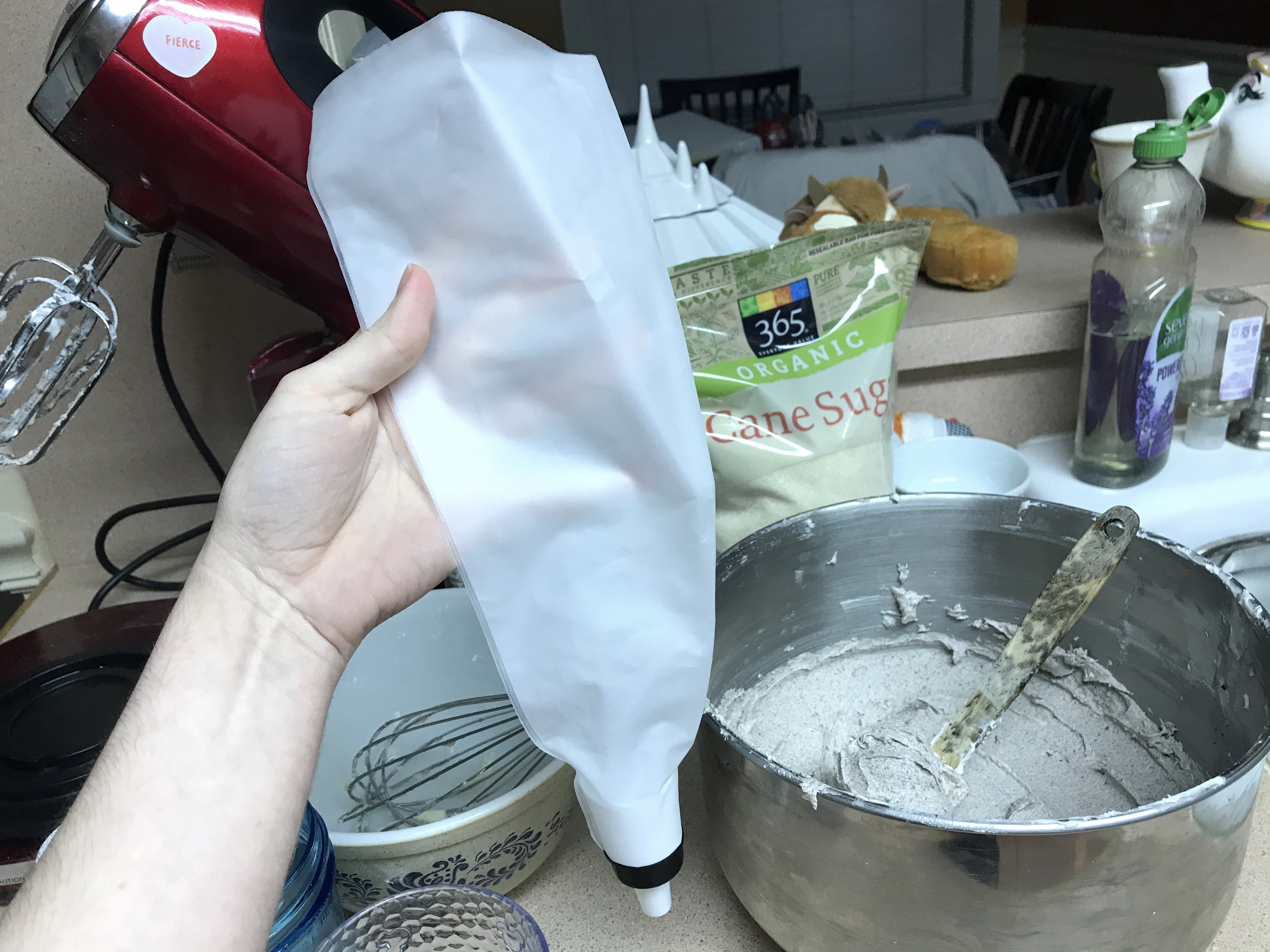 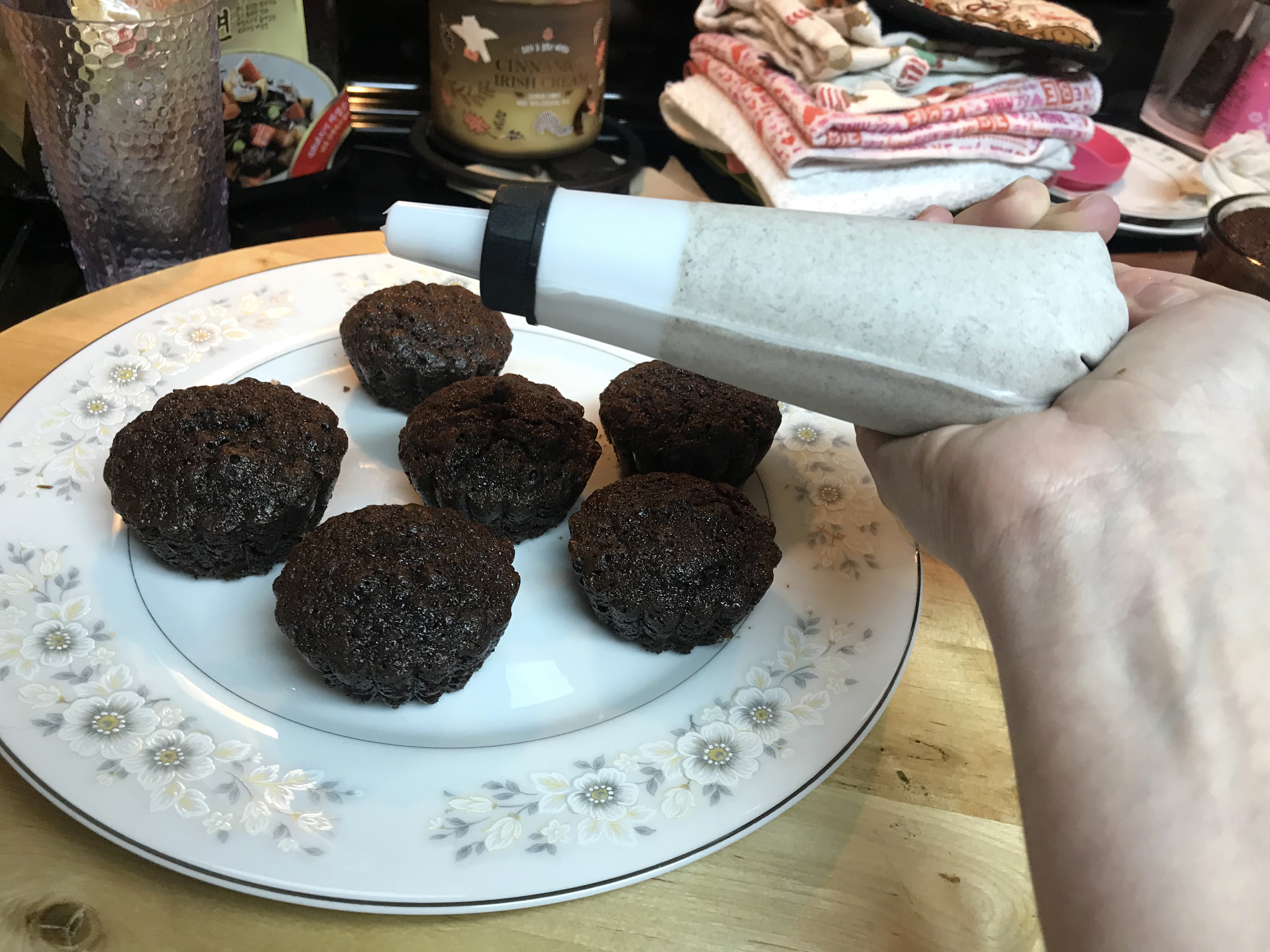 I wanted to try and be fancy for our readers’ sake and attempted to use this shoddy-quality pastry sleeve from the Dollar Tree, which resulted in cupcake tops that emulated a certain emoji. 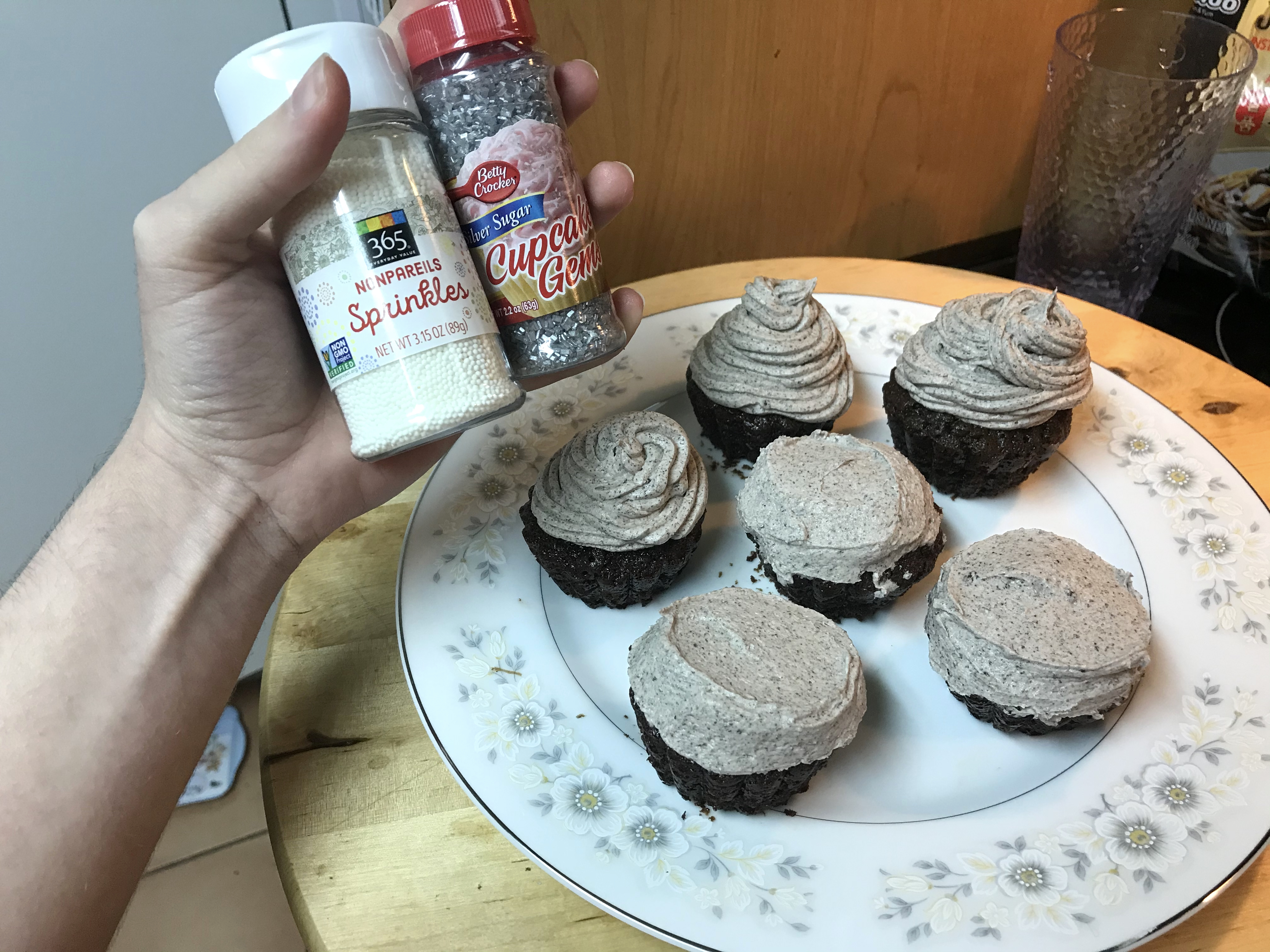 I much prefer the Sprinkles style of cupcake design, so I got a butter knife and plopped on and smoothed out frosting on the other cupcakes. No matter how they end up looking, you’ll be able to dress them up and cover up any unsightly ridges with sprinkles. 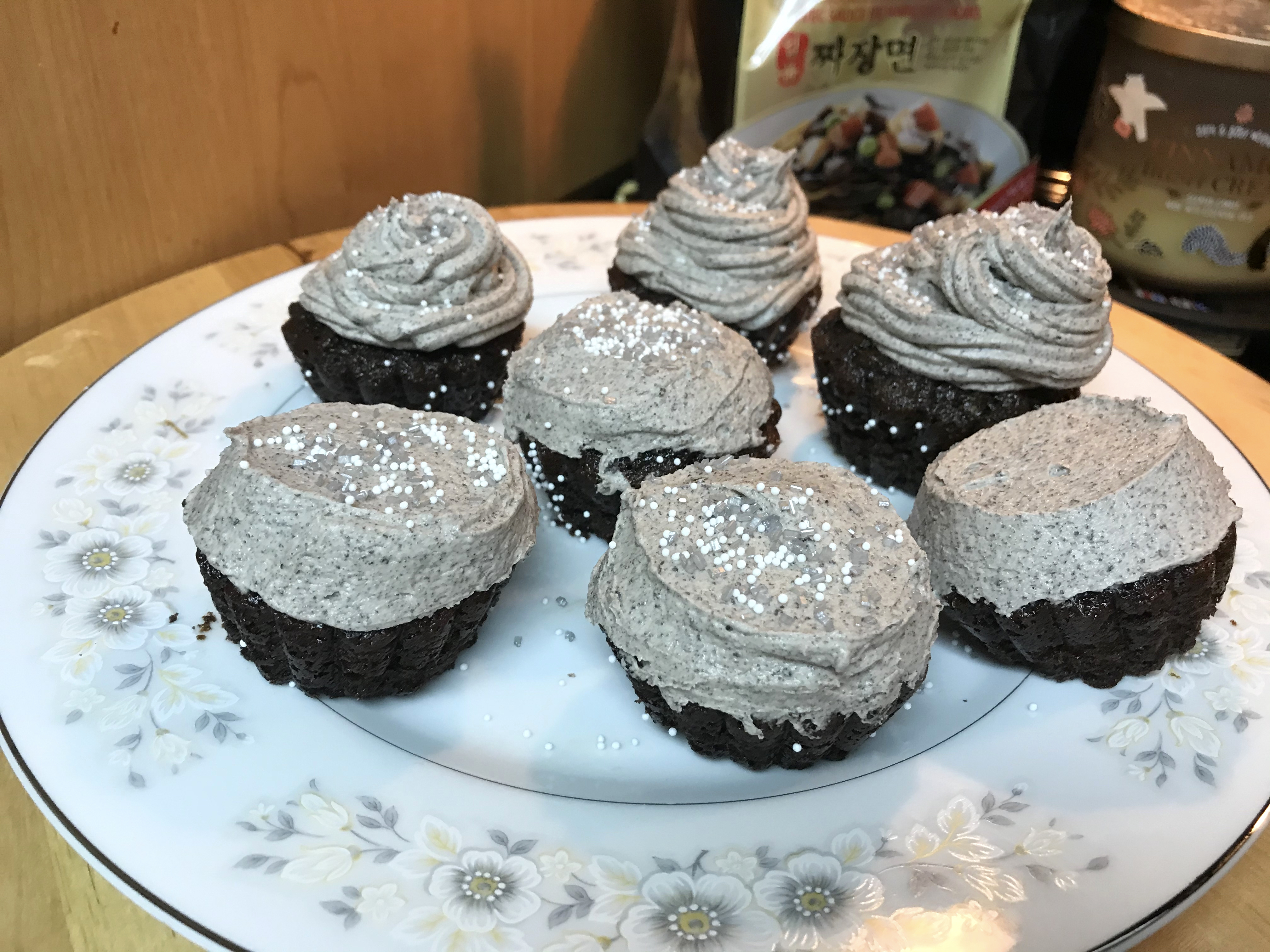 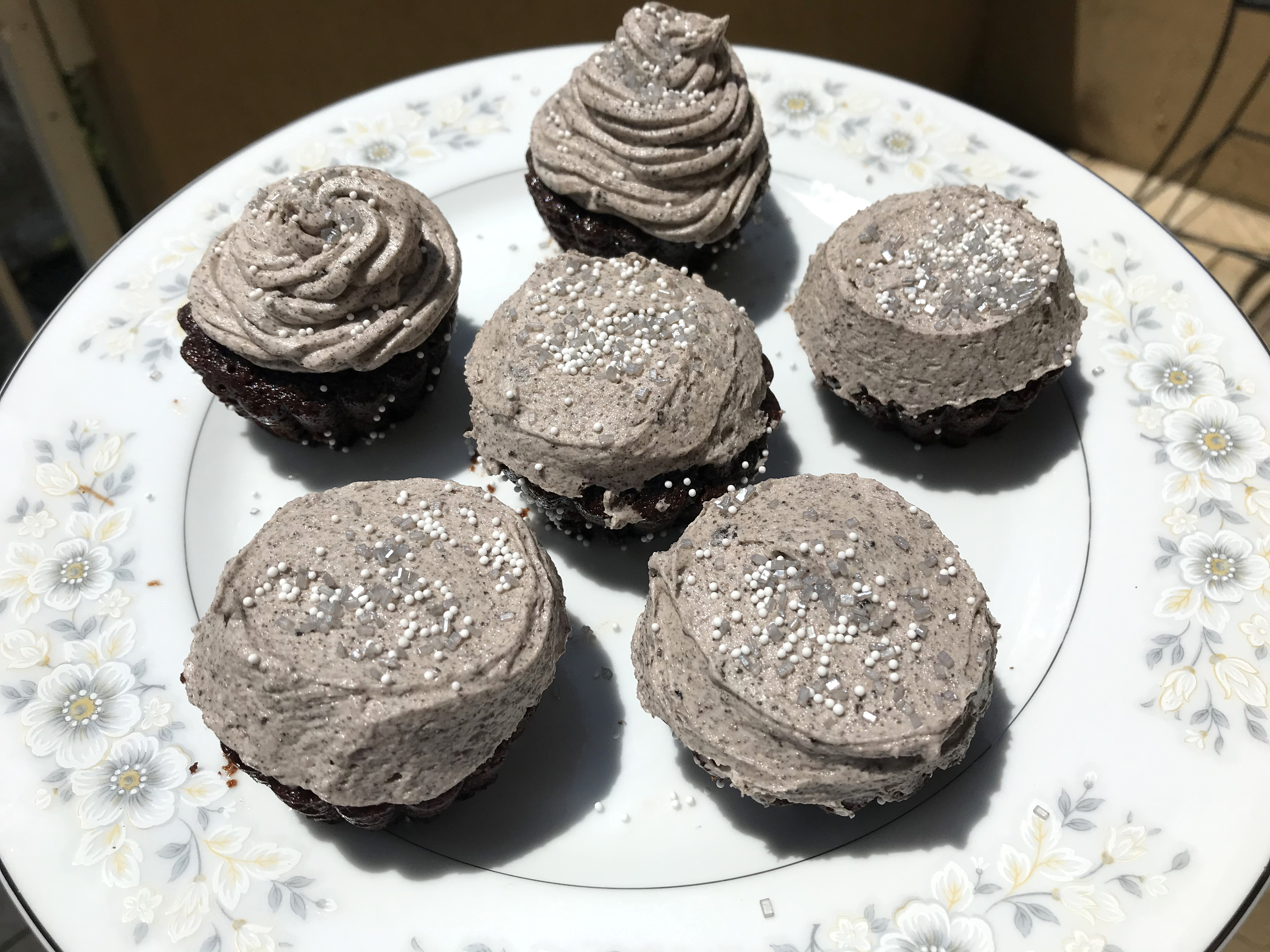 I took them out the next morning for a photoshoot outside to simulate the feeling of being in a Disney park. Thankfully, it was 90 degrees out and they started sweating immediately, so it felt really spot-on. 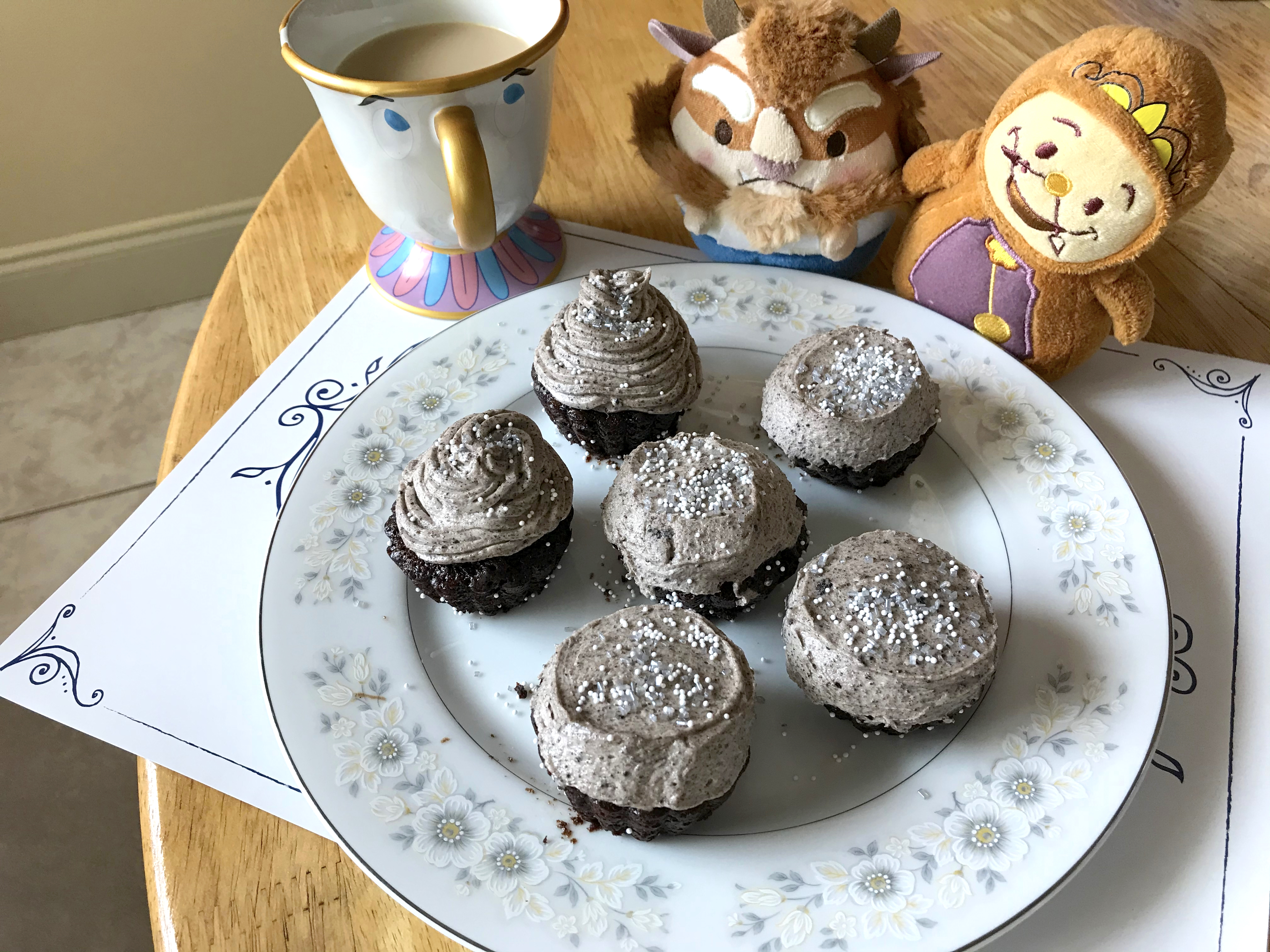 Overall, these cakes were adorable and relatively easy to make for a deeply indulgent, Grey Stuff/Oreo experience. They’re perfect if you’re having a Beauty and the Beast-themed party at home or a Be Our Guest-inspired dinner. If you’re making these for a mostly adult crowd, the sprinkles are really optional, and for my dessert preferences, they made these a tad too sweet, but they did add a fun crunch. 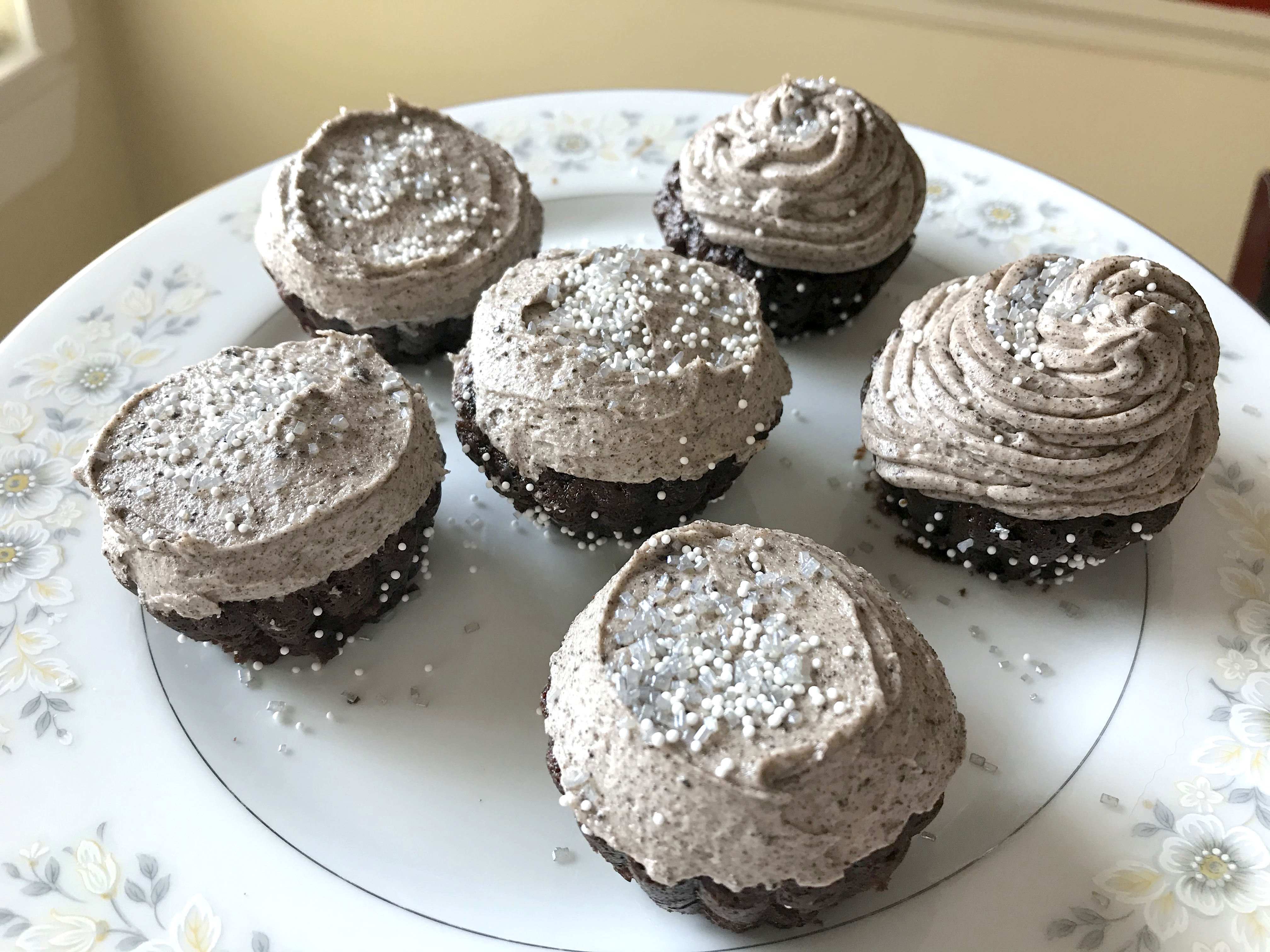 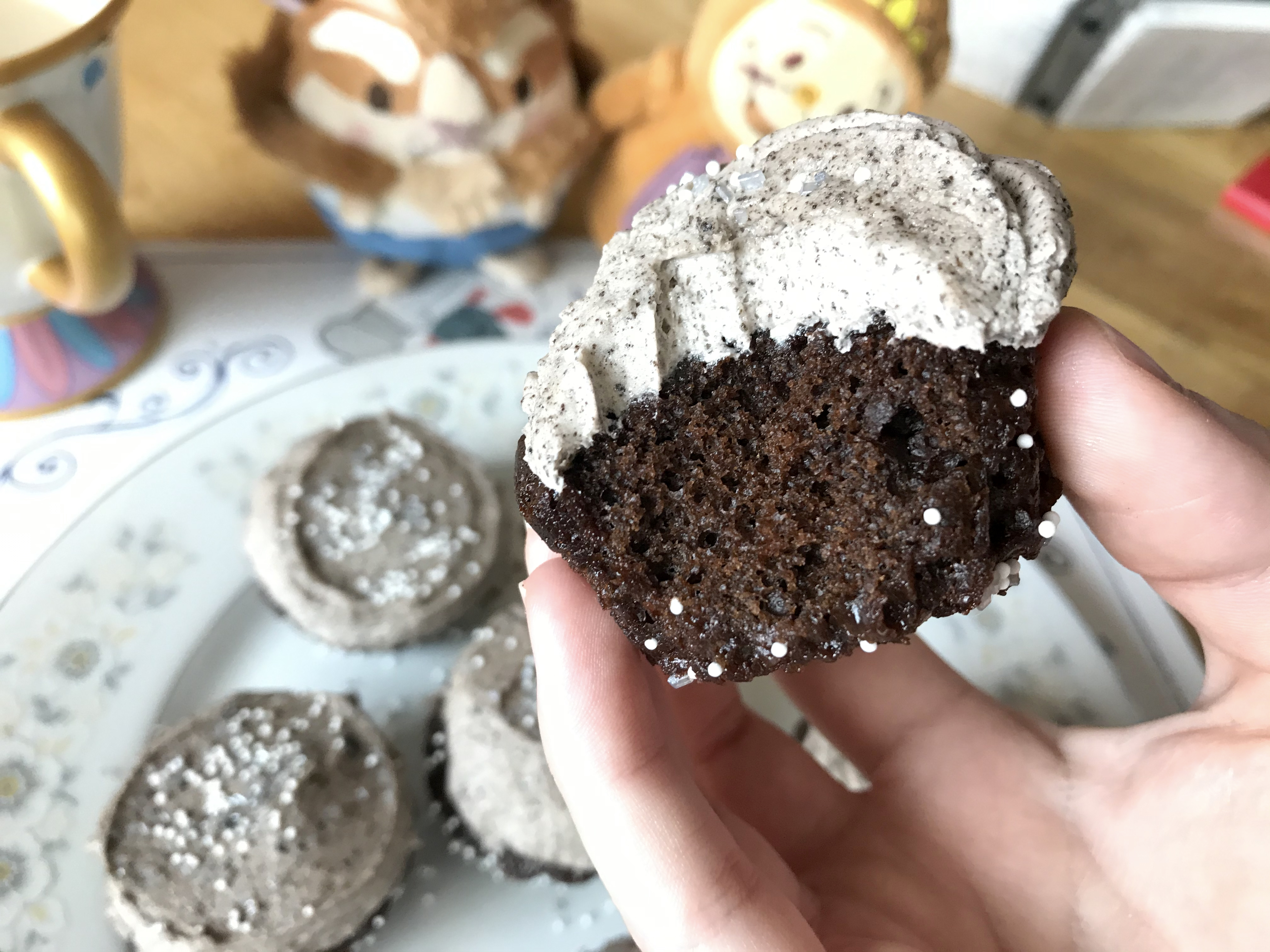 Here’s a cross-section. It’s like a real cupcake review at this point. 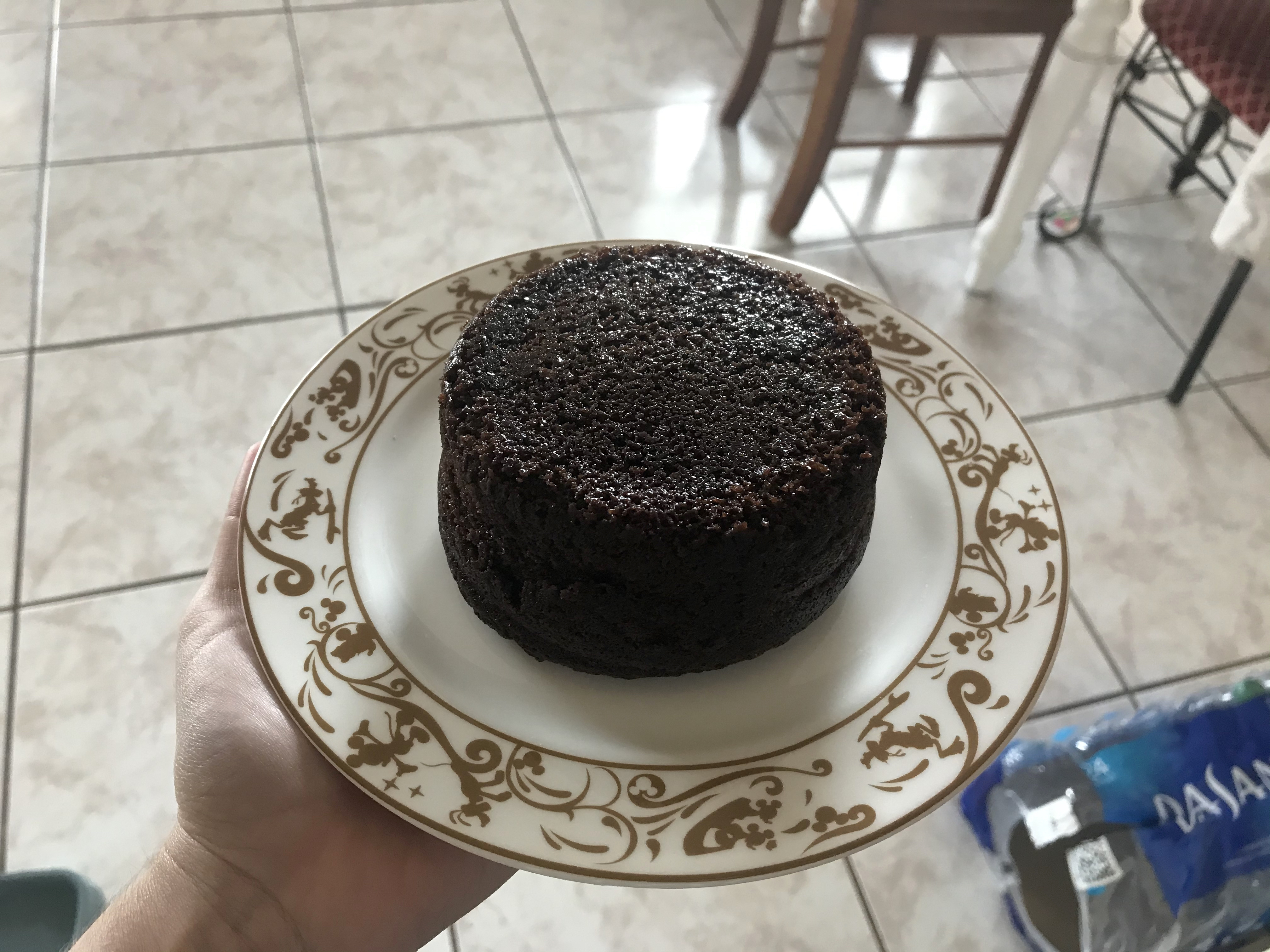 Here’s that mini cake I told you about. I secretly prefer cakes to cupcakes due to them retaining moisture much better. You could even make two of these, stack them together, and make a double-layer mini cake, because we’re living in lawless times.

You then spread layers of the Grey Stuff frosting all along the top and sides of the mini cake. (Again, I did this with an average butter knife, so nothing fancy.) 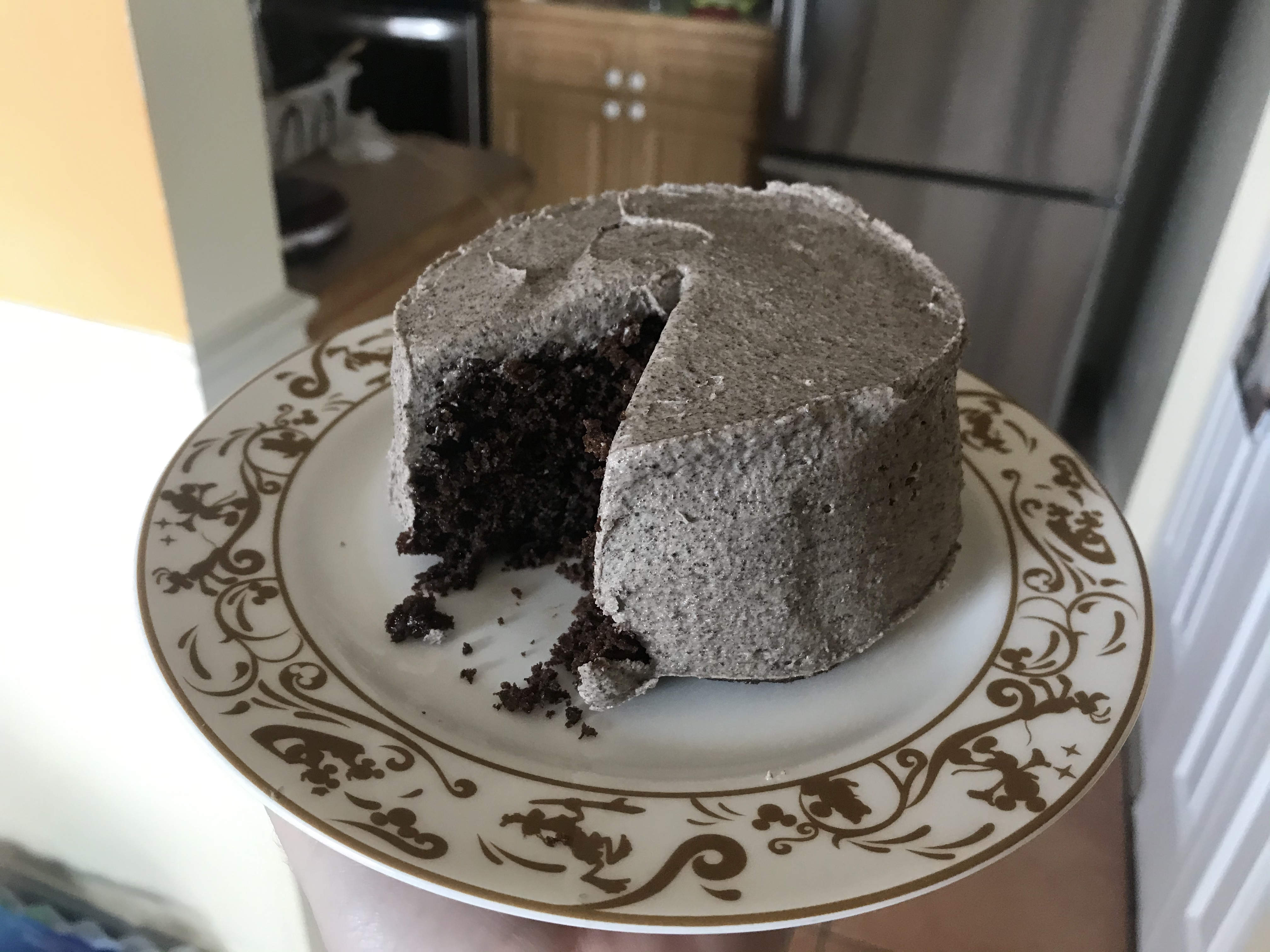 A slice for breakfast or a snack will make this baby last up to 3-5 days. 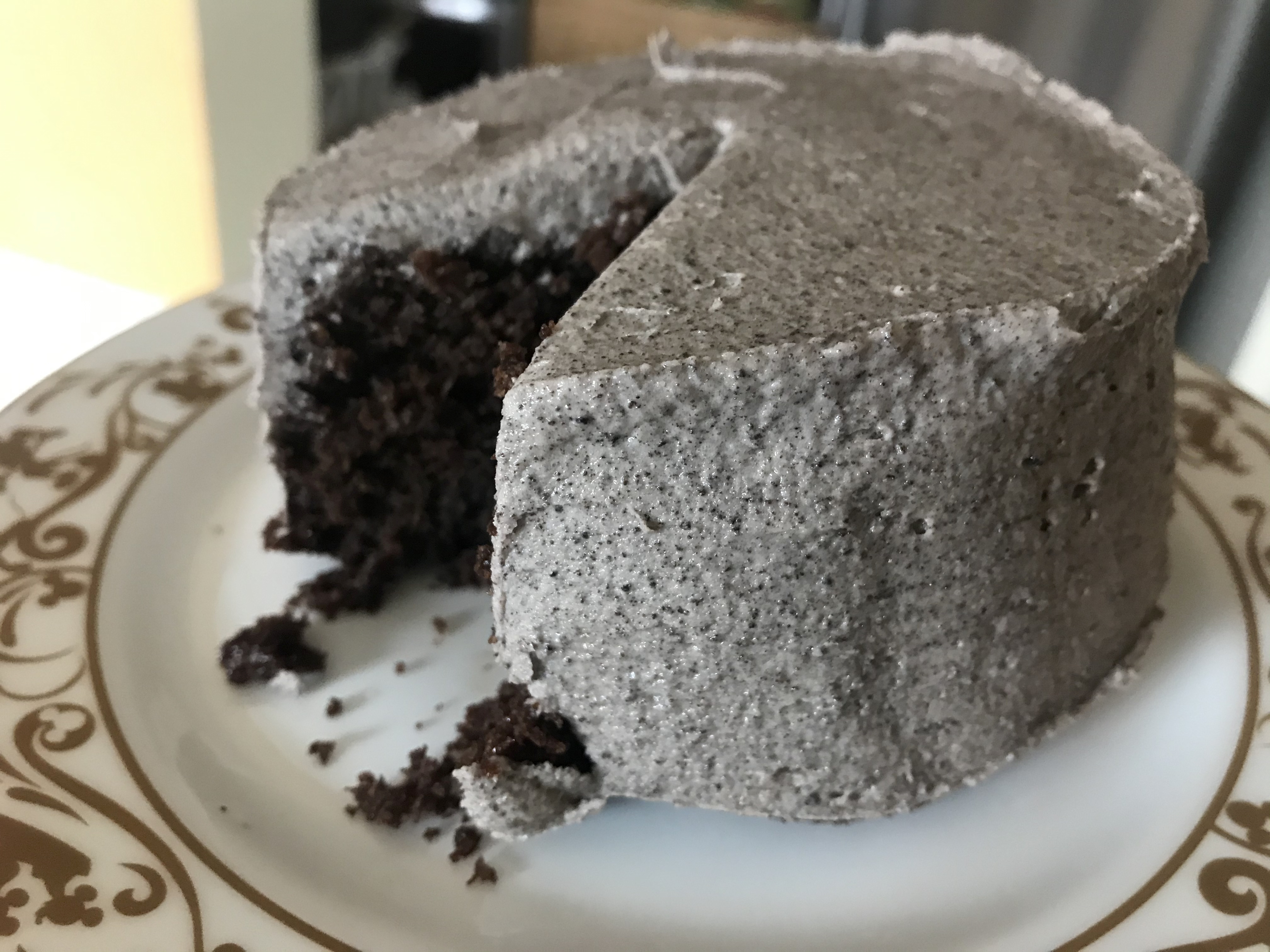 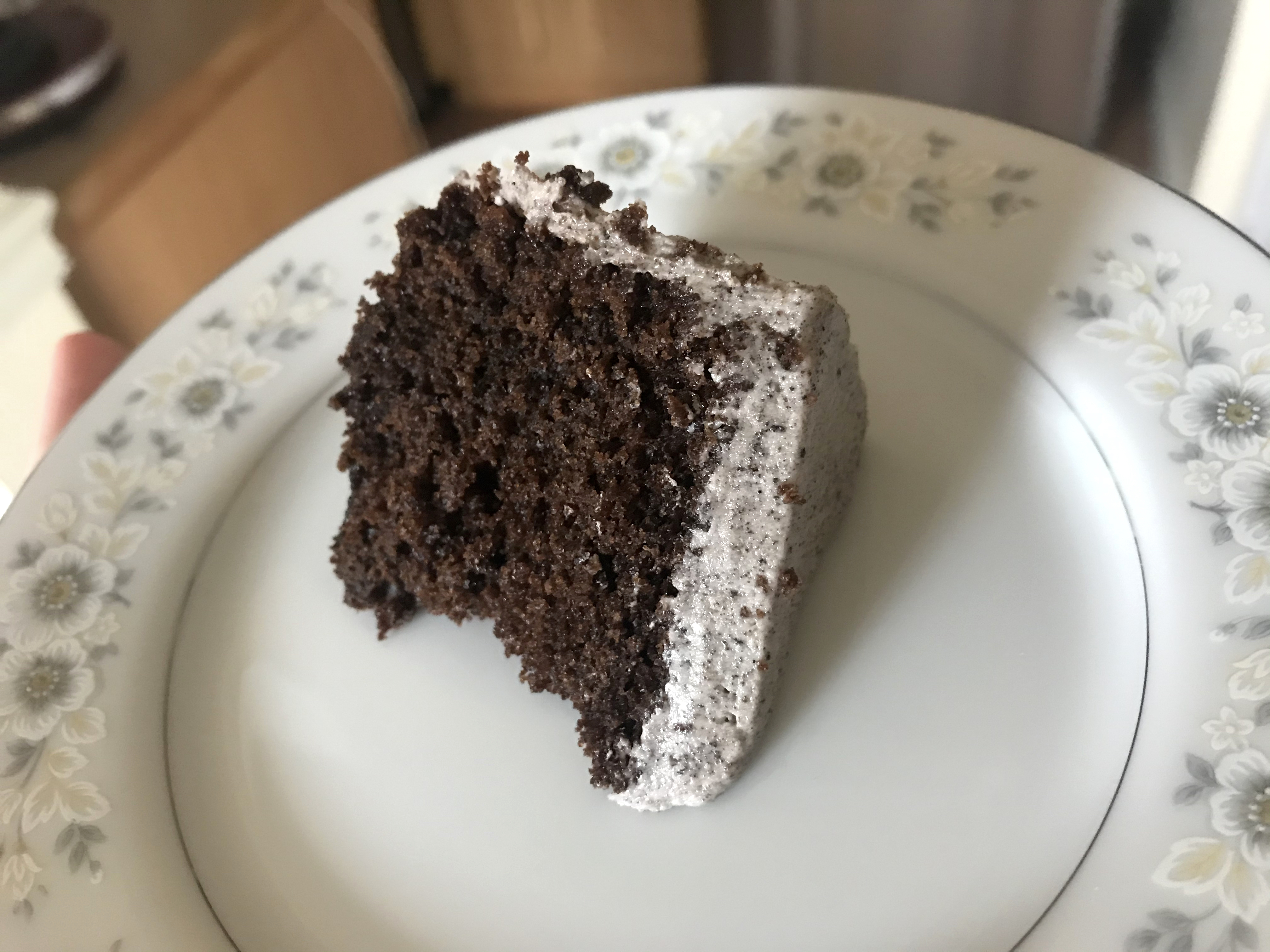 Even after frosting cupcakes, bundt cakes, and an entire mini-cake, I still have some Grey Stuff left over, but it keeps well in the fridge or you could otherwise just halve the recipe. Whether you’ve had Grey Stuff in Disneyland’s Red Rose Tavern, at Be Our Guest in Walt Disney World, or only seen it in the movie and want to recreate a version of it (I’m pretty sure what’s in the movie is more akin to a duck pâté), it’s insanely simple to do so, so I highly recommend you give this recipe a try! If you decide to make it yourself, make sure you tag us at @WDWNT on social media or feel free to email me for a chance to be featured!