With Disney Parks around the world closed for the foreseeable future, WDWNT is dipping into our archives of vintage parks materials for a look back into parks history! Today, we’re heading all the way back to 1955 for a sneak peek at the park that started all with this Adventure in Disneyland by Richfield promotional comic book!

Note: This article will detail the comic book page by page, but WIGS Members will have access to download a full-resolution PDF of the entire thing. Head on over to Patreon.com/wdwnt to join WIGS, the WDWNT Inner Globe Society, for as little as $2 a month and unlock access to great content like this, and much more! 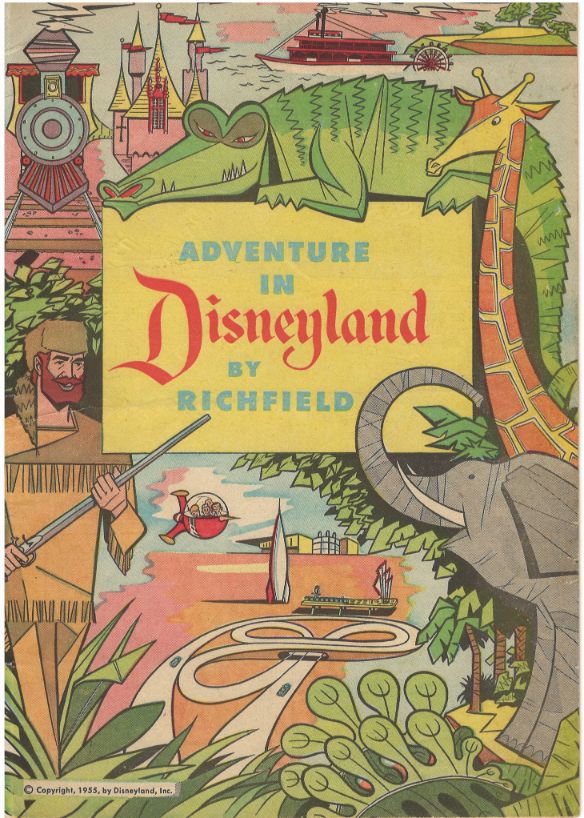 The comic book, created in conjunction with Disneyland and Richfield and designed and printed Western Printing and Lithographic Company (producers of Dell Comics), was given out at Richfield Oil-carrying service stations across the United States prior to the park’s opening. The stylized cover offers features of the park’s various lands. 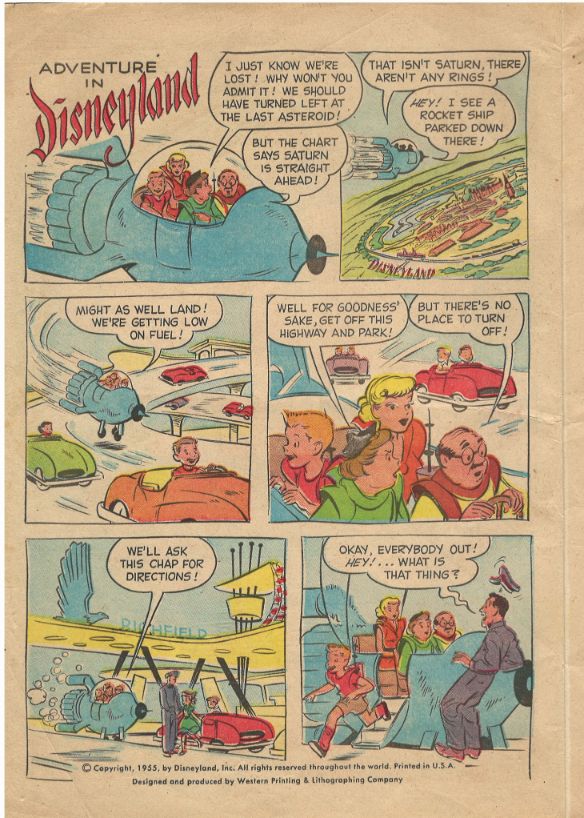 The comic itself tells the story of a family from outer space who get lost travelling the solar system, and “pull over” to Earth and its newest wonder, Disneyland. 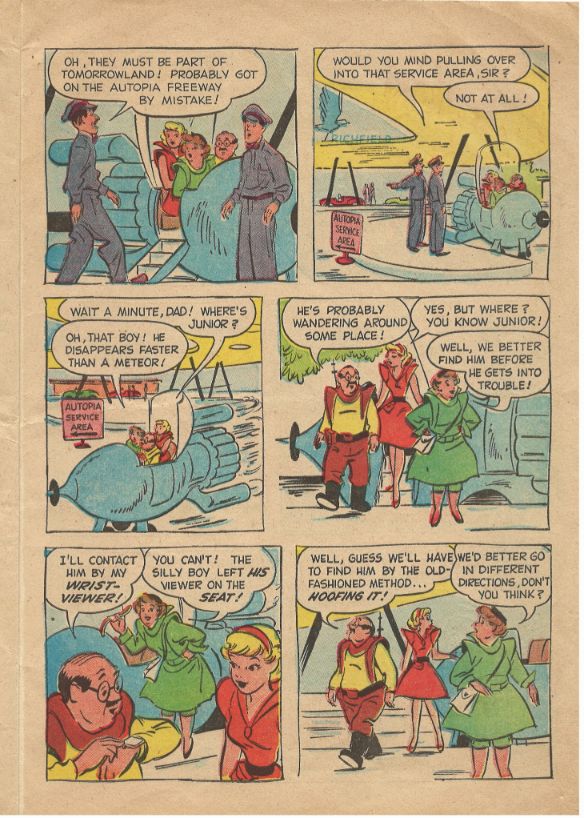 Confused by the park’s cast members, they land their spaceship onto the Autopia, conveniently sponsored by Richfield. (This is a big promotion, after all.) 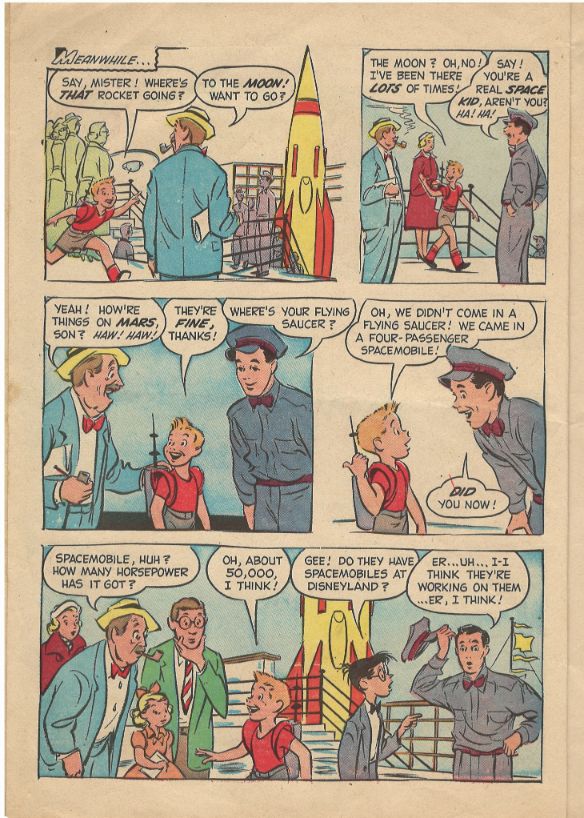 Naturally, a kid from outer space has a slightly different perspective on the excitement of Rocket to the Moon. 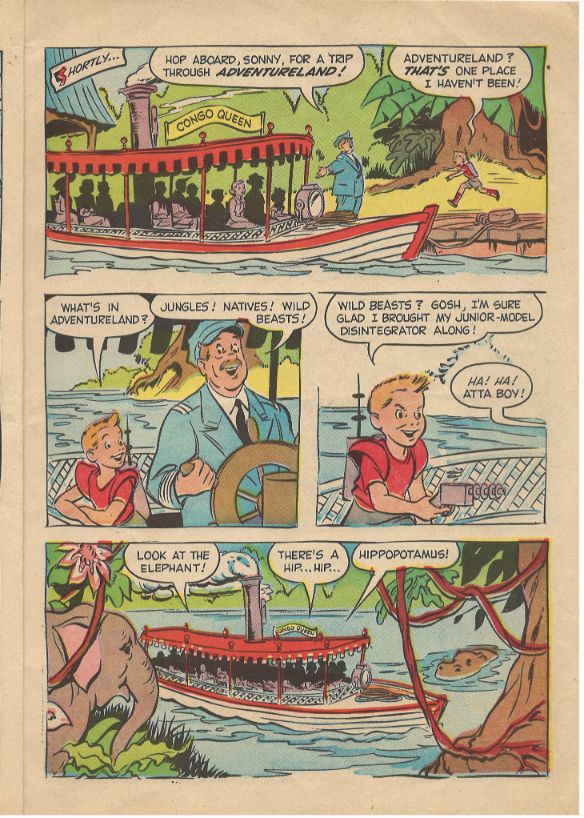 (Important safety note: don’t bring a disintegrator on the Jungle Cruise, regardless of model.) 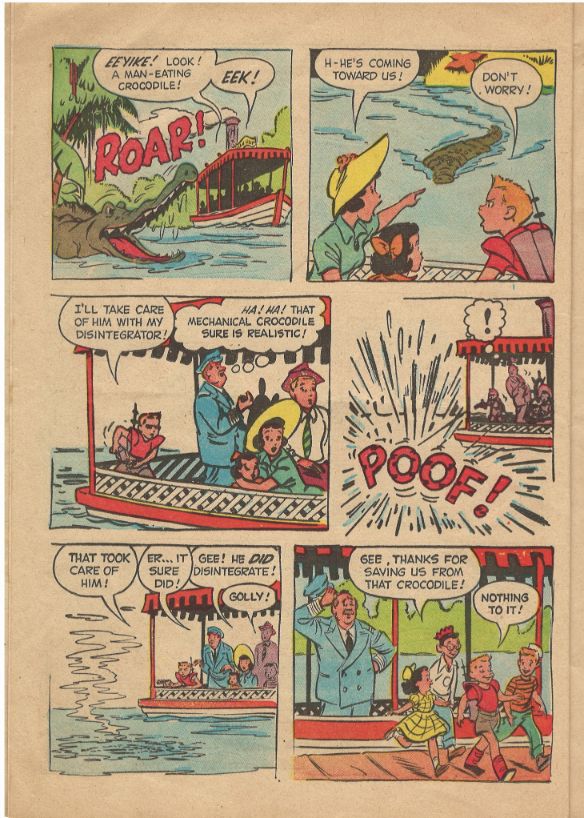 Given that the famed visual gags of the attraction weren’t there in the original incarnation, disintegrating a crocodile might’ve been the most interesting thing to happen on that ride. 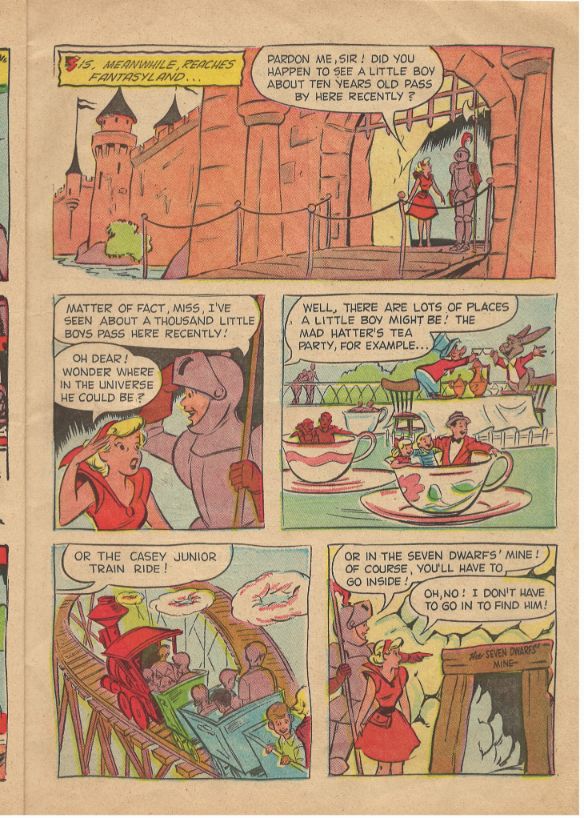 Meanwhile, his sister looks for him in Fantasyland, where a chivalrous knight shows here opening day attractions like Mad Tea Party, Casey Jr. Circus Train, and Snow White’s Scary Adventures (then known as Snow White and Her Adventures). All three attractions are still in the park to this day! 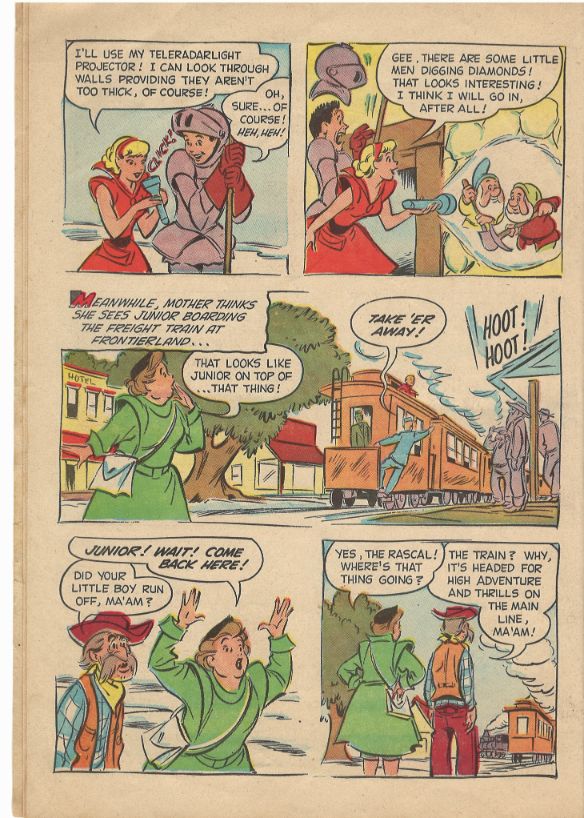 The mother searches for her son in Frontierland, where she inadvertently hijacks the Santa Fe & Disneyland Railroad thanks to a super-magnetic attractor. 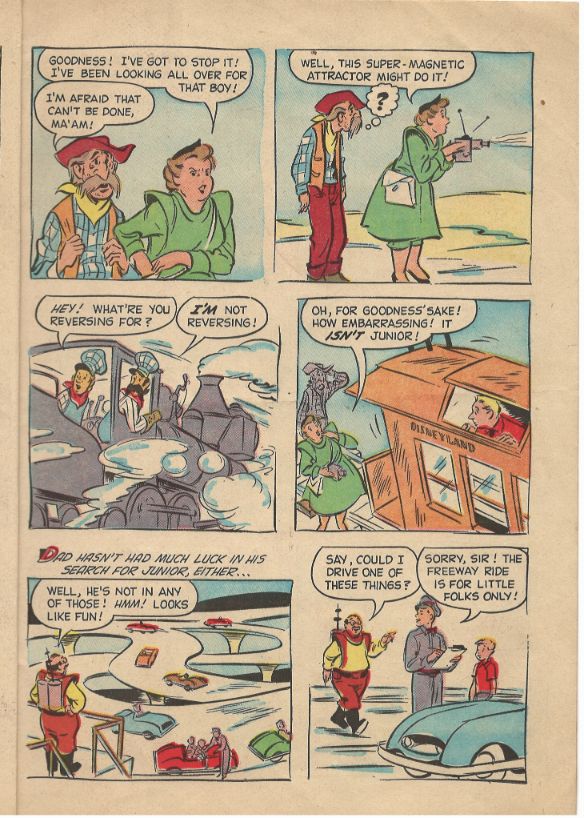 Dad, on the other hand, fully embraces the fun of Disneyland, going so far as to shrink in size in order to drive a car on the Autopia. 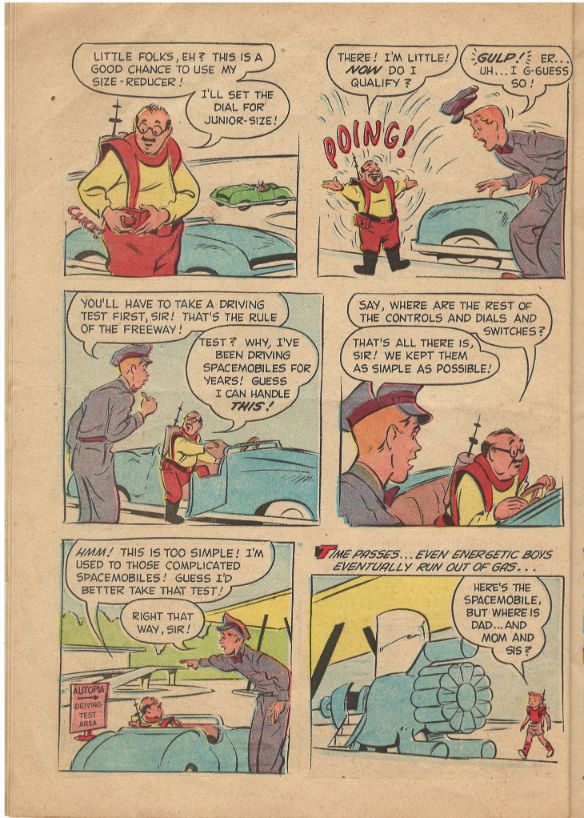 (Hindsight shows that this is one of the earliest instances of shrinking in Tomorrowland, before guest adventured thru inner space or were shrunk in an audience.) 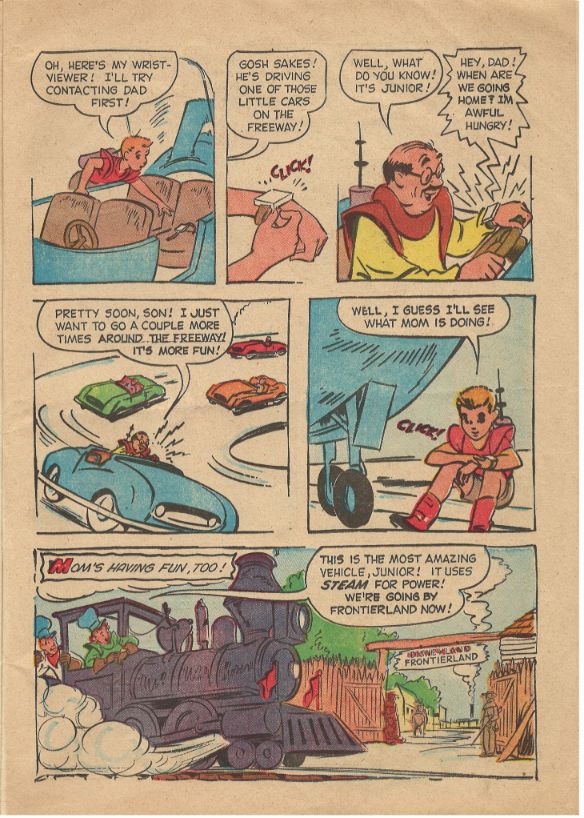 While the parents are starting to have fun, Junior’s ready to go home. 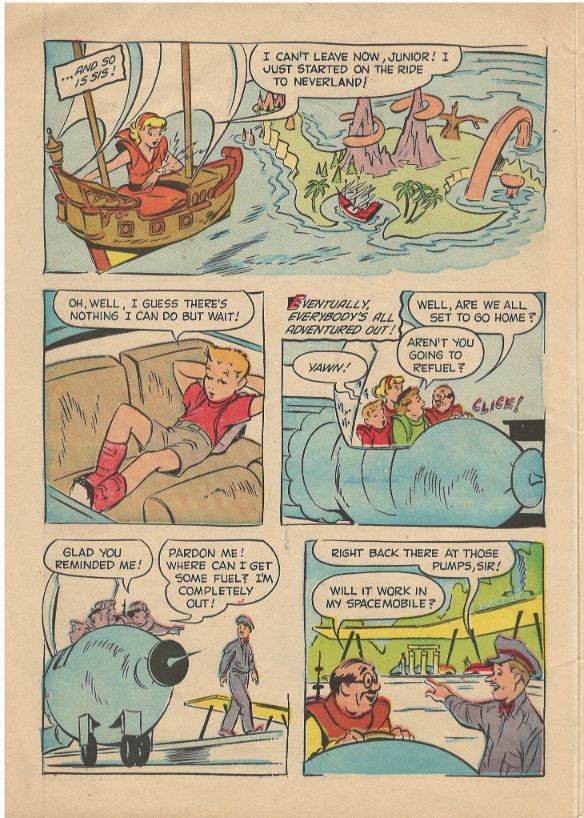 After Sis takes a ride to Neverland on Peter Pan’s Flight, the family is ready to get their spaceship fueled before leaving… thanks to good old Richfield! 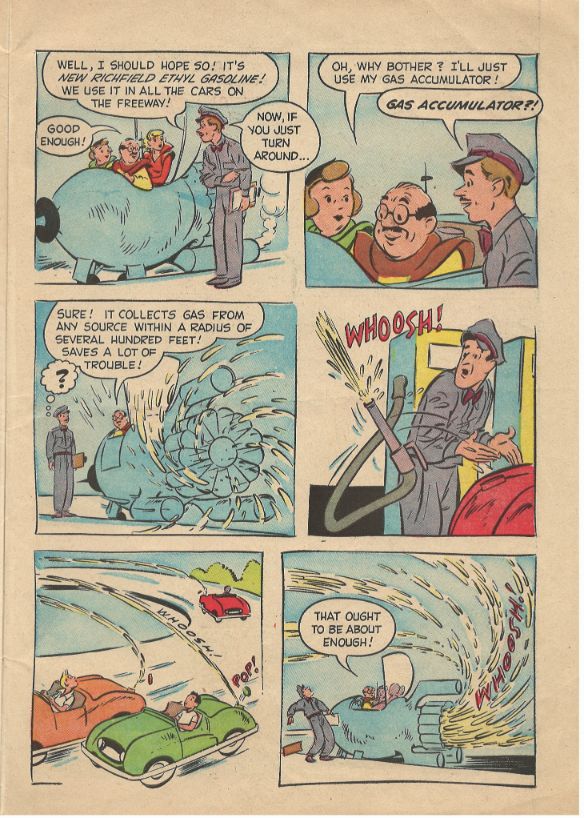 (Another safety tip: don’t siphon gasoline from Autopia cars, even if you do have a gas accumulator. It’s the Autopia, not the Walking Back to the Station Experience!) 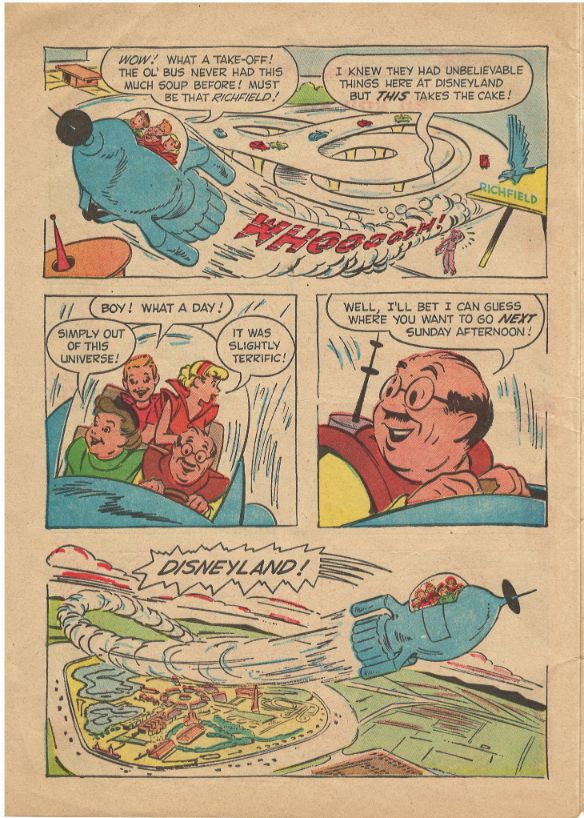 The family, still marveling at the fun at Disneyland (and having forgot to visit Main Street, U.S.A.), are ready to return next weekend. And thus, the first Annual Passholders were born. 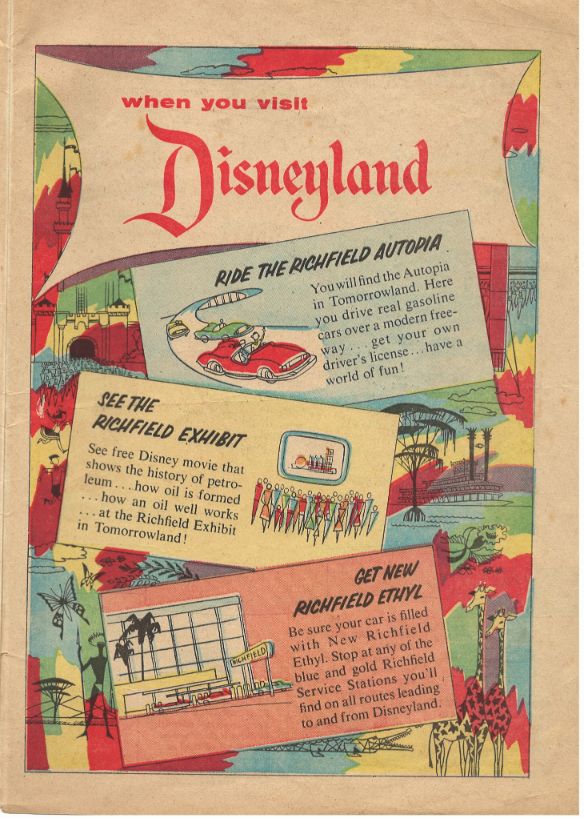 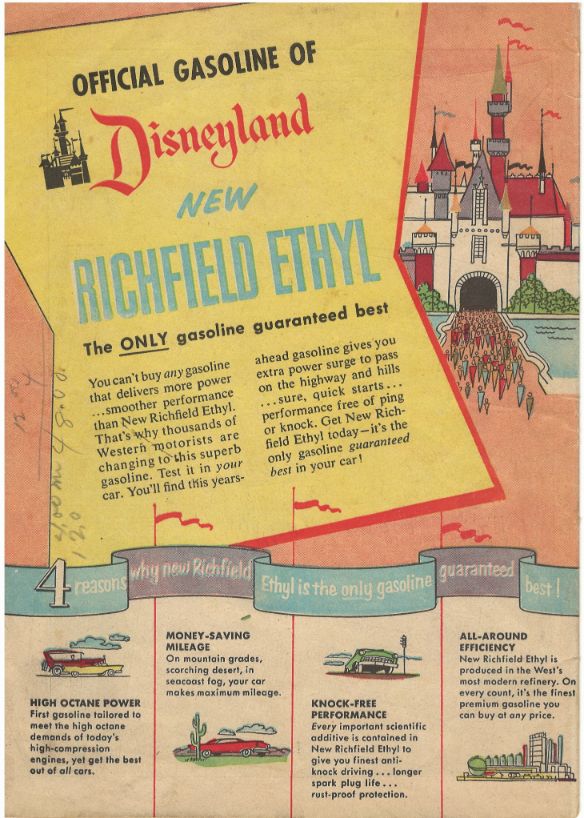 The back cover promotes Richfield’s New Richfield Ethyl gasoline. It’s the perfect way to power your car to see the brand-new Disneyland!