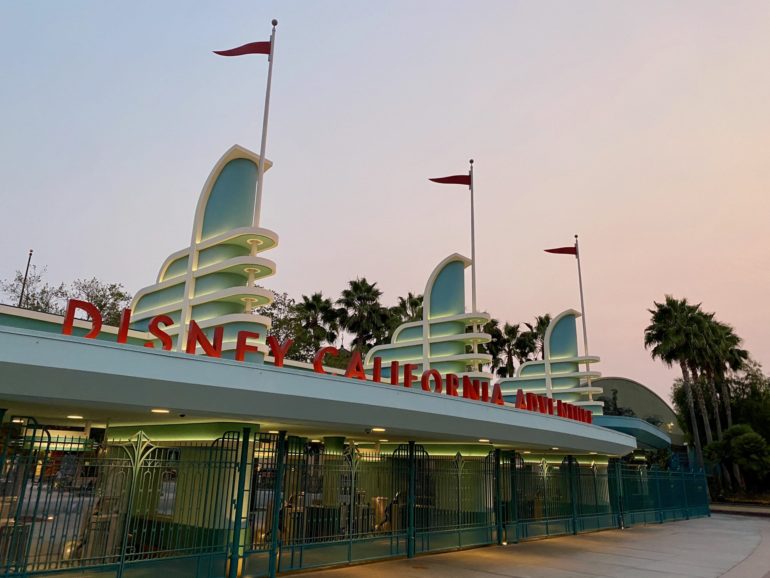 Happy Labor Day from Disneyland Resort! As we expected, this weekend was full of dense crowds and hour-long lines for parking, temperature screenings, food, and merchandise. Join us on our latest trip to Downtown Disney to see all the recent happenings and additions on property.

Parking this weekend was a bit more fluid than the last few weekends. While there was still a line of cars sitting down Disneyland Drive, people were slowly shuffled into the Simba Parking lot in an orderly fashion.

When walking towards temperature screenings, we noticed a beverage cart had been brought out to sell water to guests waiting in the heat.

While parking was less of a problem, temperature screenings were a different story. Today, we arrived around 6pm and waited about 25 minutes to enter Downtown Disney, which isn’t terrible.

The line was significantly quieter than the day before. On Sunday, we came around the same time to see a much larger queue of people waiting; let’s take a look.

Most of the parking lot near the temperature screenings entrance was being used as an extended queue on Sunday.

It was surprising to see this whole area empty today around the same time.

Umbrellas were placed along the line for temperature screenings to add some much-needed shade for guests.

Ralph Brennan’s Jazz Kitchen added two greenery walls to help block out the sun for guests dining on the outdoor patio. People were also using it to snap some fun pictures.

The Disney Home Store had about an hour and a half wait.

This store seems to usually have one of the longer waits due to its lower in-store capacity.

Once we made it into the Home Store, we spotted this new set of bag clips from the recent “Mousewares” kitchen line.

Two of the clips are the once silver and blue Cinderella Castle, and a winking Minnie wearing a bright red bow.

Mickey and Sleeping Beauty Castle complete the set for $14.99.

Pin Traders does not use a virtual queue.

Just like the olden days, guests can stand in a physical line to wait.

Jamba had no wait, as it usually doesn’t.

The newly opened California Sole Store also had no wait to enter.

The shop offers “some of California’s most iconic shoe and sandal brands.”

Not many people were looking for a fresh set of kicks tonight.

Sunglass Icon by Sunglass Hut had a few shoppers around 7:30pm.

One of the more significant challenges of coming to Downtown Disney on the weekends is being able to find a place to sit and relax. Almost every bench we saw was full of guests.

A small line was forming out the door of Wetzel’s Pretzels.

Starbucks also had a few guests waiting for their last caffeine kick of the day.

Just like the Disney Home Store, World of Disney had an hour and a half wait.

We were able to catch a peek into Disney’s Grand Californian Hotel & Spa’s Downtown Disney entrance. This hotel is still closed with no current reopening date.

While walking towards the Esplanade, we noticed it was much busier than usual.

Many groups sat along the flower fountain, where there are no social distancing markers.

The sun started to set right as we were walking through the lit up ticket booth area.

New posters have made their way to the Esplanade. Although we are not able to celebrate Halloween at Oogie Boogie Bash this year, 31 Nights of Halloween will be available all October on Freeform.

This new Black Widow poster can be found directly next to the 31 Nights of Halloween poster.

Always have to stop and say hello to Disneyland!

Along with the posters, a few new billboards can be seen from the entrance of Disney’s California Adventure. On the far right, a Pixar Soul advertisement has been added. Replacing the Hamilton billboard, you can see a portion of the newly added Mulan poster to the left.

On the far left, you can see half of the new Black Widow billboard.

As it got later in the night, guests continued to make their way over to the park entrances for a last bit of Disney magic.

Even as the night went on, the crowd level stayed the same.

There was a duck party outside Tortilla Jo’s tonight! Looks like we aren’t the only ones over this heat wave.

On the way out, a Cast Member tested our knowledge with some fun Pixar Trivia! Do you know any?

Thank you for joining us on our latests trip to Disneyland Resort. Will you be visiting soon? Let us know in the comments below!