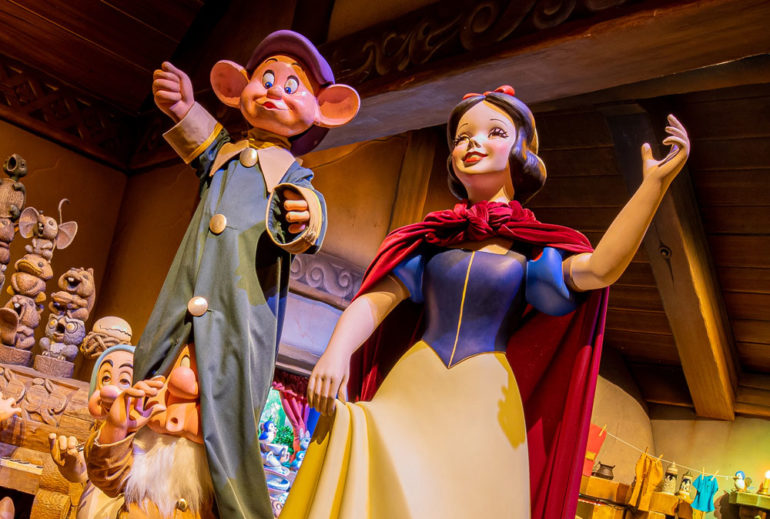 Heigh-ho! It’s off to Disneyland Resort we go for a first look inside “Snow White’s Enchanted Wish”, the newly renamed and reimagined version of Snow White’s Scary Adventures in Disneyland park. Walt Disney Imagineering has shared today a video and some photos from inside the attraction. Check out the full announcement below!

As we’ve previously announced, Snow White’s Scary Adventures has been undergoing a magical reimagination. Today – on the 83rd anniversary of the premiere of Disney Animation’s “Snow White and the Seven Dwarfs” at the Carthay Circle Theatre in Los Angeles – we’re excited to share that Disneyland park’s only ride-through princess attraction has been reimagined and renamed as Snow White’s Enchanted Wish!

While Disneyland park has been closed, Walt Disney Imagineering has been putting the finishing touches on this cherished attraction, which will be ready to welcome guests when we reopen our theme parks at a later date. While you may recognize some familiar elements in the attraction, you’ll be surprised to discover enhanced story details and all-new scenes.

Take a look at some of the newly redone scenes from the attraction below:

Imagineers have updated this classic Fantasyland attraction with state-of-the-art audio and visual technology, including new music, LED black lighting, laser projections and a new animation system as the attraction brings to life Snow White’s “happily ever after.”

As seen in the video, we get a new and improved Seven Dwarfs cottage scene, with beautiful dancing figures of Snow White and Dopey. Smellitzers will have the scent of Doc’s delicious baked apple pie wafting through the set.

Vibrant new shadow projections bring to life the dwarfs as they march happily off to work in the mine singing “Heigh-Ho.” The most dazzling scene is the mine, which sparkles with shimmering lighting effects and glittering jewels all around. If you recall how dark this scene was, this upgrade is definitely a welcome one.

Finally, we see the “happily ever after” scene where Snow White is brought back to life by the prince, filled with sparkling light effects and butterfly projections.

One thing to note in this sneak peek is the absence of the Evil Queen—it’s still unknown if her “scary” transformation scene survived the refurb, or if she’s even seen throughout the attraction at all. Disney did mention making Snow White the star of the reimagining, and the former attraction did feature the Evil Queen quite prominently—in fact, the ride started out at the queen’s castle, with the Evil Queen peeking through the curtains every few minutes.

Disney was very specific in what it showed and didn’t show from the “new” ride. Considering that this attraction is a staple of Disneyland, it’ll be interesting to see what the final product looks like—that being said, this isn’t the first time the attraction has undergone a significant refurbishment. In 1983, as a whole new version of Fantasyland was unveiled, Snow White’s Adventures reopened with new technology and a brand-new facade, along with the new name. (Initially it was called Snow White and Her Adventures, then Snow White’s Scary Adventures.)

Snow White’s Scary Adventures closed on January 6, 2020 for the reimagining at Disneyland, shortly before the parks shut down due to the COVID-19 pandemic. We got to see the beginnings of the exterior facade’s colorful makeover back in February.