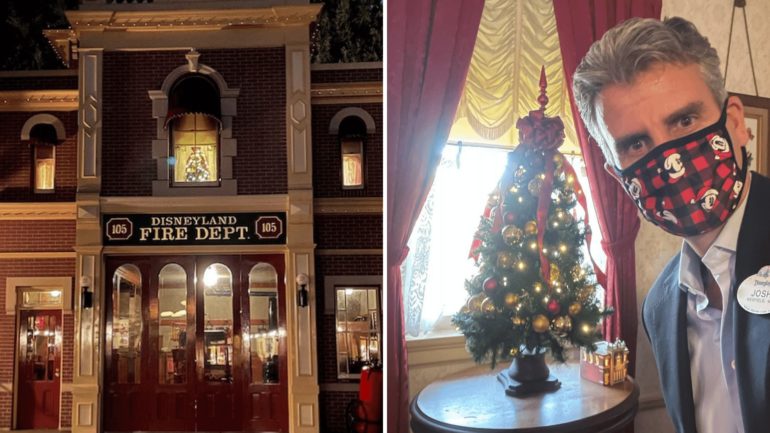 With Disneyland Park remaining closed through the end of 2020, guests won’t be able to experience the holiday decorations of Walt Disney’s original park. Thankfully, Josh D’Amaro, Chairman of Disney Parks, Experiences and Products, shared a look at one piece of Christmas decor that was still placed this year. Cast Members have put a small Christmas tree in the window of Walt’s apartment above the Disneyland fire station.

D’Amaro posted pictures of the tree on his Instagram.

Stopped into the Disneyland Resort this week and was delighted to see the Resort Enhancement team had installed the tree in Walt’s Apartment — we always leave a light on for him. I had to share since I know you won’t be able to see it this year. Be safe everyone. Happy Holidays!

As he references, the apartment famously always has a light on in the window directly above the fire station sign.

In one photo, a Guest Services Cast Member pointed out the tree to D’Amaro. D’Amaro has been spotted at both Disneyland Resort and Walt Disney World several times in the past few months, particularly following the initial news of the company’s massive layoffs.

We’re glad to see some holiday cheer in Disneyland Park, even if we can’t visit it ourselves. Though there are holiday decorations at Downtown Disney District and the Buena Vista Street expansion, neither will be open on Christmas day.