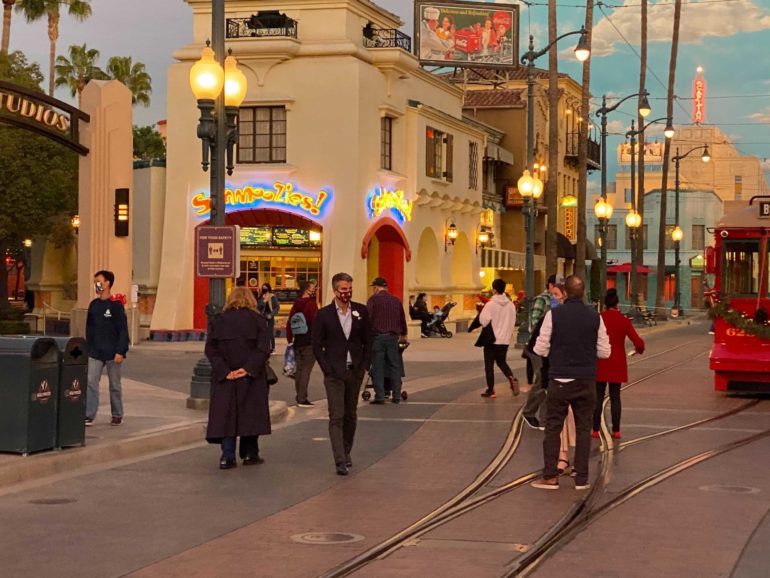 Josh D’Amaro, Chairman of Disney Parks, Experiences and Products, has been spotted this afternoon at Disney California Adventure.

D’Amaro was seen taking a look around the Hollywood Land area, which has seen a number of reopenings, even after most of the Buena Vista Street expansion had to shut down after a regional stay-at-home order closed indoor and outdoor dining throughout the county.

The reopening of Buena Vista Street as part of Downtown Disney District at one point proved promising for the overall return to normal at the shuttered Disneyland Resort, however recent rising cases of COVID-19 across California quickly stunted all progress. Disney’s Grand Californian Hotel & Spa, originally scheduled to reopen on December 6, now remains closed indefinitely along with the rest of the resort’s hotels, and while third party vendors are able to fulfill take-out orders across Downtown Disney District, it’s unknown when Disney will be able to reinstate its restaurants. Recently, it was also announced that Downtown Disney District would be closed on Christmas Day.

As the head of Disney Parks, Josh D’Amaro has been at the forefront of some of the company’s hardest decisions in the wake of the pandemic, including the laying off of 32,000 Cast Members over the past few months. The latest wave of layoffs took place just before Thanksgiving. D’Amaro was last seen at Disneyland in early October, apologizing to Cast Members and letting them vent to him about the recent events. With Disneyland Resort projected to remain closed through at least January 2021, it’s unknown if additional furloughs or layoffs are still to come.