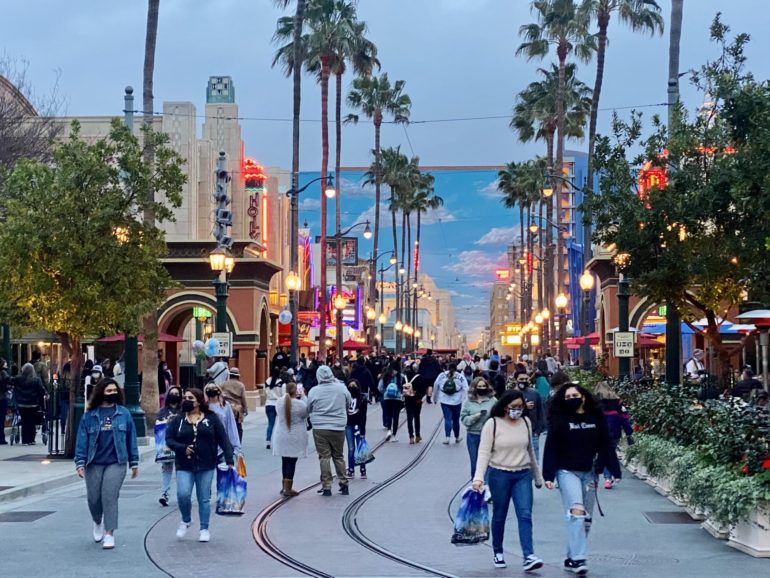 It’s been a week full of exciting news in California, so we decided to end it off right at Disneyland Resort. Today marked the last day of “free admission” for Disney California Adventure before “A Touch of Disney” begins on March 18th. With Disneyland and Disney California Adventure’s openings on the horizon, we have seen lots of preparations underway at the resort. Follow along with us on our latest trip.

The temperature screening line at the Downtown Disney entrance was a 75-minute wait around 6 PM. However, the Harbor pedestrian entrance had no wait.

This is in preparation for “A Touch of Disney” ticketed event that is starting later this week.

They are all evenly placed at a safe distance.

A year ago today, Disneyland Resort closed. Luckily, the ropes surrounding Disneyland were dropped and we were able to get closer to the gates than we have been in months.

Guests waited in a physically-distanced queue to have their picture taken at the front gates of the park.

It felt surreal looking into the park again a year after the closure.

All of the turnstiles at Disneyland have received new wrap-around plexiglass safety covers.

This will help protect both Cast Members and guests.

While we still do not have a official opening date for Disneyland, Bob Chapek announced at the recent Annual Shareholder Meeting that Disney is planning for a late April reopening of both Disneyland Park and Disney’s California Adventure. Theme parks in California can reopen starting April 1st.

It was packed in Disney California Adventure tonight. Locals wanted to soak in the last few moments of “free entry” into the park.

The crowds made it look like the park was open and fully functioning.

While walking down the parade route, we noticed some of the MARVEL Avengers Campus walls had been painted black.

The area rope had also been moved forward making it so you couldn’t directly see into Cars Land. This may be due to preparations for “A Touch of Disney” event.

We’ll miss these quiet corners of Grizzly Peak. Being able to explore small areas of Disney California Adventure the last few months has been a unique experience.

The sun went down and people slowly started to make their way out of the park since it closed at 8 PM.

Everyone wanted a last few photos at the WandaVision photo opportunity.

Agatha was directing in spirit.

Over by Stage 17, the last few merchandise displays were being brought in for the night.

There was no line for Off the Page so we decided to check it out.

Since the WonderGround Gallery reopened, there has been less art available here.

A new Up pin set is now available for $27.99. This set includes four pins representing four different scenes in the film.

A new pin set with four robotic-themed character pins is also available for $27.99.

As 8 PM approached, guests did their last circles around Buena Vista Street and the extended areas.

One last look at Carthay Circle.

Thank you to the wonderful Cast Members who were able to keep the magic alive in Disney California Adventure over the last few months!

While this photo was taken a little bit earlier in the night, Downtown Disney was just as busy as Disney California Adventure. Let’s head into World of Disney to check for any new merchandise.

The first one is a peach color with splashes of orange, and of course our favorite mouse on the front. Disneyland Resort is featured in small text below.

Next is the blue and white tee with the same graphics on the front.

A new mens pink Nike Dri-FIT made its way over to World of Disney as well.

Small grey cross marks create a subtle pattern on the shirt. An embroidered Mickey is on the upper right corner of the shirt.

This can be purchased for $90.00 in the mens department.

Our last merchandise find for the night was two new pairs of fleece pajama pants!

The first ones are a blue, green, black, and grey Mickey pattern, mimicking camo print.

These have a drawstring waistband and a button on the front.

The bottom of these pants are flushed.

The next pair features a 101 Dalmatians print.

These also have a drawstring waistband and a button on the front.

This pair has a tapered hem. These are also priced at $36.99. That’s all for merchandise! Lets check out the rest of Downtown Disney District.

Starbucks Coffee has a few groups waiting in line for their late night caffeine kick.

Sadly, Sprinkles Cupcakes has yet to reopen even though dining is now permitted on Disney property.

The new art displays in the WonderGround Gallery windows look wonderful at night.

The Downtown Disney Monorail station was all lit up tonight as well. Disneyland Resort has been busy lately, and it’s only the start of the reopening process.

Will you be visiting Downtown Disney District or “A Touch of Disney” ticketed event soon? Let us know in the comments! Thank you for following along and stay tuned for the latest news regarding Disneyland Resort.