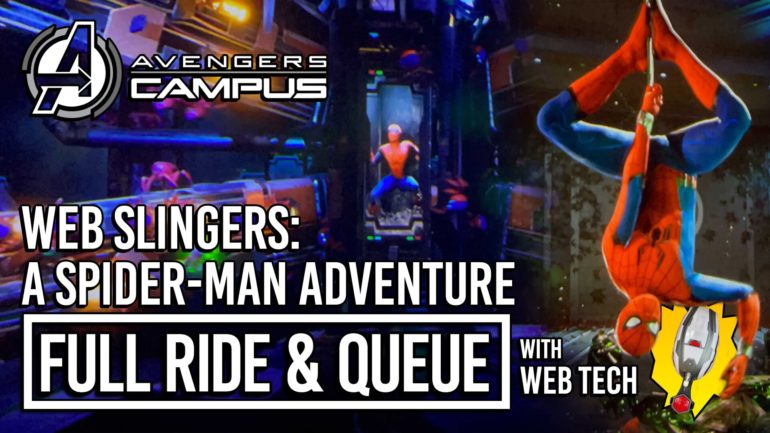 Worldwide Engineering Brigade (WEB) is now hosting an open house in Avengers Campus, so we can finally join Spider-Man for an amazing adventure. WEB SLINGERS: A Spider-Man Adventure is the brand-new flagship ride for Avengers Campus at Disney California Adventure, which had its grand opening today.

Watch our POV walkthrough and ride on WEB SLINGERS: A Spider-Man Adventure, then keep reading for photos and more details. Our video includes us using the infamous WEB Tech “add-ons” that are sold in Avengers Campus as well. Check it out:

Like Star Wars: Rise of the Resistance, WEB SLINGERS utilizes a virtual queue. Guests can join (or attempt to join) the queue on the Disneyland app at 7:00 AM and 12:00 PM daily. They will then be assigned a boarding group, and can head to WEB SLINGERS when their group is called.

Guests with a boarding group that has been called can skip the line to enter the rest of Avengers Campus.

We got our first look at these Cast Member costumes last month.

Of course, even after your boarding group is called, there is still a bit of a wait to board WEB SLINGERS. Thankfully, the queue is full of fun easter eggs to check out on your way to the attraction.

There’s some web-shooter tech in one courtyard of the queue for guests to check out as they wait.

As you can see, the tests made a mess on the walls.

Signs throughout the queue talk about some of the in-story engineers behind WEB. MCU fans may remember Harley Keener from Iron Man 3. He designed the WEB Power Band prepulsor upgrades.

In Marvel lore, Onome is a child prodigy from Wakanda. She designed the ride’s vehicle.

Another sign features more information about the “Web Slinger – a superpowered autonomous vehicle.”

A closer look at the webs strewn about the queue.

After waiting in the exterior queue, guests then enter the WEB building.

Guests go through workshops, including the prototype lab.

In the pre-show, Peter Parker will welcome you to the WEB Open House.

You’ll spot some Spider-Bots here too, along with some really cool Marvel references.

This pre-show room had the most kinetic energy, with movement all around.

Projections of Spider-Bots roam the vents.

Be careful of potato guns.

A map of the Campus from when it was a secret facility operated by Howard Stark can be found.

There are Plexiglass dividers between each loading row. Then, we were on the ride!

The ride vehicles are fun and unique.

You can use WEB Tech add-ons to try for a higher score and different “blasts” on this interactive attraction. That being said, they are heavy and we didn’t feel like they particularly enhanced the ride.

The story of the ride is that Spider-Bots are taking over WEB Labs, so it’s your job to help Spider-Man destroy them. You move through different labs and scenes from Avengers Campus as the danger escalates, and different-colored Spider-Bots are worth more points.

The music and 3-D animation on this attraction are pretty cool.

Ultimately, however, this was a pretty short and simple ride. It was mostly just flinging our arms at screens for four minutes.

We wish there were more physical sets and audio-animatronics. The only moving figures were the occasional Spider-Bot that had a few arms that moved about

There were only a few scenes. It didn’t feel like a repeatable ride and wouldn’t be one of our first option when visiting Disney California Adventure.

Best scores from the hour and day are displayed on screens as you exit.

I guess some Spider-Bots are still on the loose.