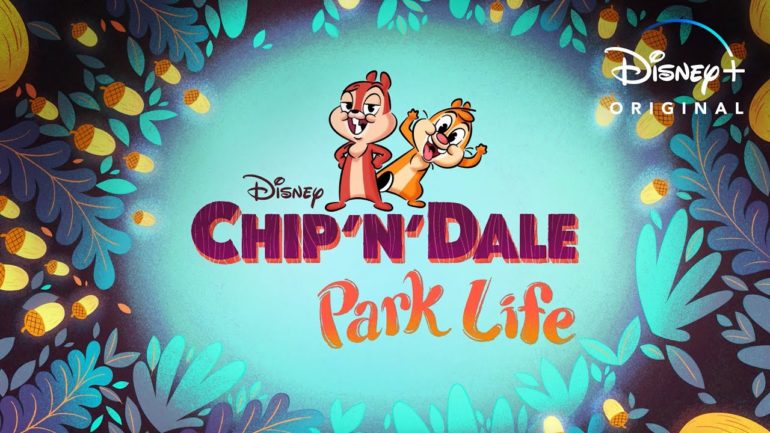 Two nutty chipmunks are getting ready to take the streaming world by storm in the new Disney+ Original Series, Chip ‘n’ Dale: Park Life, premiering July 28th. Disney has released the opening titles for this new show, in which the duo gets into one scrape after another.

In the video, Chip and Dale chase around an errant acorn, encountering other Disney characters like Pluto and Butch, while they fly past the legs of a duck that looks suspiciously like Donald.

In addition, Disney also released a poster for the show, showing the duo (and Pluto) ready for action. The official description of the show reads:

“Chip ‘n’ Dale: Park Life” follows two tiny troublemakers, Chip and Dale, trying to live the good life in a big city park while having giant-sized, sky-high adventures. Nervous worrier Chip and laid-back dreamer Dale make the perfect odd couple: they’re best buddies and they drive each other nuts. In their perpetual pursuit of acorns, these ultimate underdogs are joined by Pluto, Butch and other iconic Disney characters as they face down bullies great and small.

The Disney+ original series is produced by Marc du Pontavice and directed by Jean Cayrol at Xilam Animation. Vincent Artaud serves as the series composer.

This project is separate from the live-action/animated film adaptation of Chip ‘n’ Dale Rescue Rangers, which is also in production for the streaming service.

Will you be checking this new series? Share your thoughts in the comments!