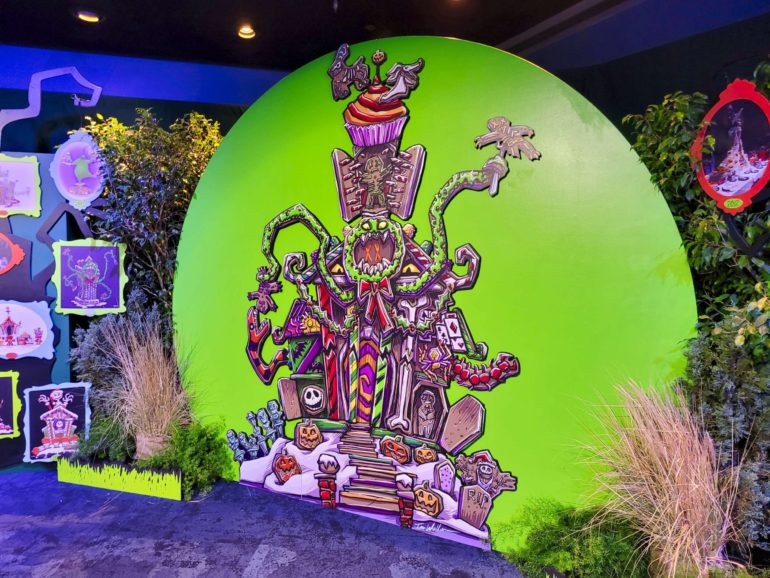 No Halloween season at Disneyland Resort is truly underway until Haunted Mansion Holiday takes over one of the most infamous attractions, and this year rings in a special “dead”-ication to memorialize gingerbread houses past.

Hundreds of man hours are spent creating and baking the gingerbread treats that make up a big scene in Haunted Mansion’s seasonal “Nightmare Before Christmas” overlay that many flock to. The Graphic Designer for the yearly gingerbread house, Tim Wollweber, said a “chill” went down his spine when he realized this year’s 20th anniversary roman numerals would be fitting to make creepy eyes for some of the mansion’s baked patrons to perfectly “skelebrate” the occasion.

19 years of gingerbread houses make up the imagery for this year’s “EXXhumed Delight” gingerbread creation, with nods to previous years, including 2009’s Scary-Go-Round house and 2005’s Giant Man-eating Wreath, to name a few.

The house is sketched and then brought to life using 3D printers, fabricators, and bakers who find a way to transform over 200 pounds of gingerbread dough melded with animatronics to life for the season’s best scares. The Central Bakery Team constructed the largest-yet 13-foot house in five separate sections, where they were then carried to the attraction and assembled. Final touches on the creepy crypt, including shingles, snow, and hidden Mickeys are then set in place, according to Pastry Sous Chef Gracie Gomez.

Tim’s favorite Easter egg in the creation is the nod to Jack Skellington’s 20 year stay at the Haunted Mansion with a dedicated tombstone in front, “It’s both funereal and Christmas-y, which is exactly what Jack would want.”

Check the rendering below that lists each of the haunted houses from the past and their influence on this year’s appropriately named Gingerbread Franken-house.

You can watch a video of this year’s iteration below: