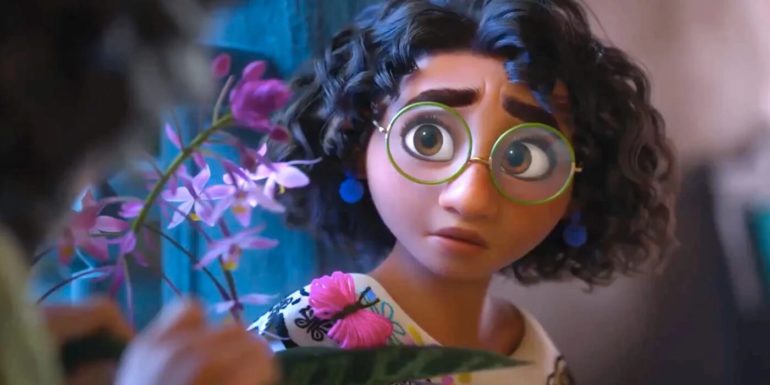 Encanto is the latest film from Walt Disney Animated Studios, telling the tale of a young Colombian girl and her desire to find her place. Each member of the Madrigal family has been blessed with enchanted powers and abilities. Unfortunately for Mirabel, she is the only member of her family that does not exhibit such powers. At times, she feels that she has been cursed and wonders why she is the only family member who is not special. Throughout her journey, she comes to learn that there are more important things than magical powers that make one special.

Encanto was led by the directors of Tangled and Zootopia, which in my opinion, are two modern Disney animated classics. Going into the movie, I had really high hopes that this would be the case for Encanto, but this movie was a slight disappointment for me. It just seemed to lack the fun and interesting stories of their previous features.

I think one of the big problems, similar to Eternals, is that there are too many characters. There just isn’t enough time for much character development, other than Mirabel. There are maybe a dozen family members and I think it would have been best to cut that number in half. I understand that they were probably going for the idea of showcasing a large diverse number of family members, but the only names I really could remember were Mirabel, Bruno, Luisa and Abuela. In a case where there are too many characters, some will stand out, while others will not. I will say that this movie is really fast paced and it does not drag at all.

Maybe it would have been too similar to Frozen, but I think the story would have worked better if it focused more on Mirabel and her sister. Mirabel and her sister are two polar opposites and they do not get along. Seeing the both of them work together to find out that maybe they have more in common than they originally thought could have led to a more interesting story.

On the positive side, this movie is a visual work of art. Walt Disney Animation Studios has become a powerhouse when it comes to their animation style. They really have no competition. I think it would be fair to say that they even surpass Pixar now. The colors in this movie just pop with such detail and there are so many of them. Even when a scene has its dark moments, you can’t help but notice the beauty and fine detail in those scenes. I do favor the design of the characters in Disney Animation to Pixar. When I look at Tangled, and even the recent Raya And The Last Dragon, I’m still amazed at what Disney can accomplish with their characters.

I also think its great that this movie helps showcase Columbian culture. The diversity of each family member, the architecture, the lush landscapes, the food, the music and the importance of family are all represented in Encanto. There is such a big world out there that could be used as a backdrop to modern fairy tales and it’s nice that the audience gets to see it. It makes you leave the theater and wish that maybe we could see some of Encanto represented in EPCOT’s World Showcase.

The voice actors in Encanto are all very good. Everyone seems to match their characters voice perfectly, and for me, there was only one recognizable voice. I appreciate that because I would rather identify the voice with the character than with a well known actor.

The one thing that I have noticed is, that in the last few years, Disney has been making movies without villains. You look at Moana, Ralph Breaks The Internet, Frozen II, Raya And The Last Dragon, Onward, Soul, and Luca. Like Encanto, the one thing they have in common, is there is no main villain. A great villain makes a movie. Where would the Lion King be without Scar or The Little Mermaid without Ursula? The hero always needs a great antagonist so that their victory is that much sweeter. And from the list of movies that I just mentioned above, are any of those movies really considered Disney classics? I think Disney has gotten too soft and that they might feel that kids don’t want to see bad guys anymore in their movies. Bring back the villain!

As far as the music goes, I’m just not a big fan of Lin Manuel Miranda’s music. I know that there are millions who are, and that I am in the minority, but to me his music doesn’t work well with Disney animated features. There are a few standouts, but I also think there are some duds too. Waiting On A Miracle is by far my favorite, but the music that I enjoyed the most were those that were sung in their native language. I’m glad that they included some songs that were sung in Spanish and it makes me look forward to re-watching Encanto with the Spanish language option. I love watching Coco in Spanish, and Luca only improved for me once I was able to watch it in Italian. I have a feeling that will be the case for me with Encanto.

I’m not sure what children are going to think of Encanto. The movie is beautiful to look at, and there are some amusing characters for them to see, but I think the story will go over their head. There are a lot of things that just are not explained properly. I think the message of Mirabel not having powers will probably be very relatable to children that may not excel in sports, or don’t feel they have a special talent, but I also think they would rather watch Frozen for the hundredth time instead of seeing this movie over and over again.

Before I end this, I needed to talk about the animated short that appears before the start of the Encanto. It’s called Far From The Tree and I loved it. It is about a young raccoon who learns from their parent how to survive in the wilderness. For the first minute, I was asking myself, why does this look so different? Then I realized that it was done in the hand drawn animation style. This put a big smile on my face and made me realize that Disney has to go back to doing some animated features in the hand drawn animated style. It’s not very long at all, but I got more enjoyment out of Far From The Tree than I did with all of Encanto. And the raccoons were raccoons! They didn’t sing, they didn’t have human voices, but they expressed every emotion perfectly. I have a lot of respect for director Natalie Nourigat and I hope we see a lot more of her work in the near future.

Encanto is one of Disney’s most visually stunning animated features. Some of the music is very well done, that highlights the spirit of family within Columbian culture. In no way does this film drag, but at times, it’s just not as interesting as previous Disney entries and lacks the charm of previous animated features.