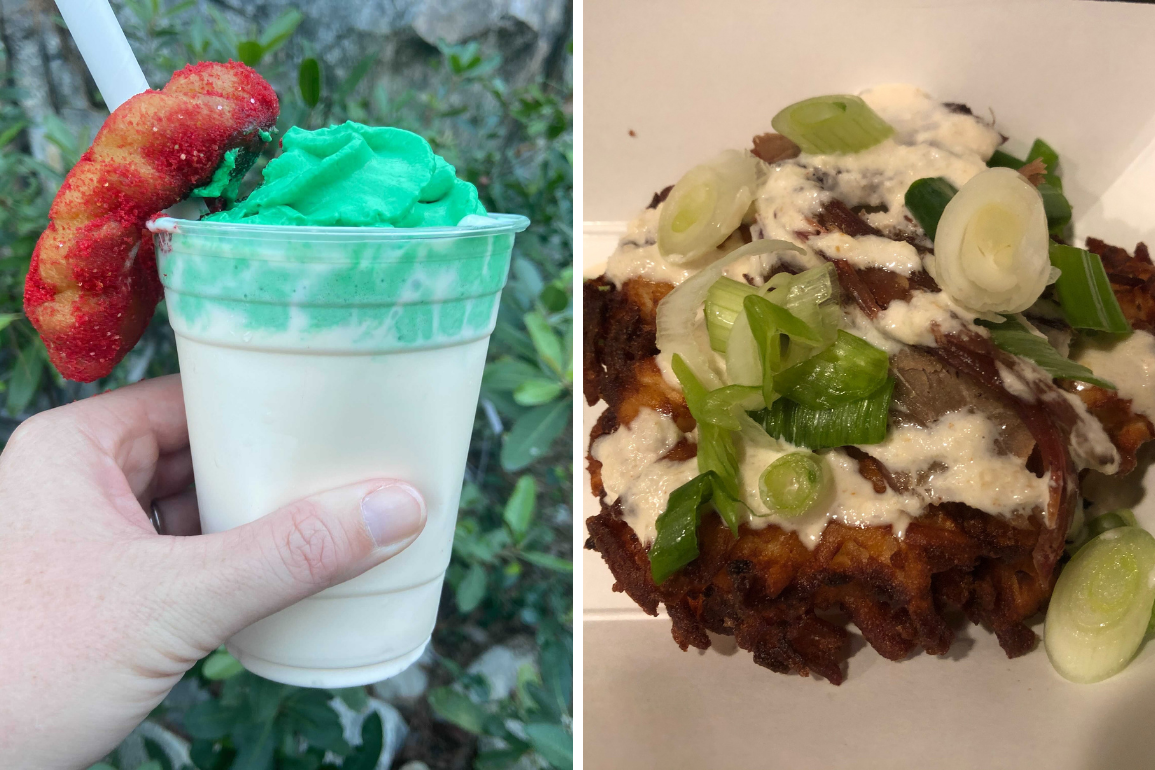 For the Festival of Holidays, Smokejumpers Grill at Disney California Adventure is saying, “Merry Chrismukkah!”

A new Holiday Shake has arrived in traditional Christmas colors, while Hanukkah gets its due with the return of Loaded Latkes. Let’s chow down on this multi-holiday celebration!

This is a fun, festive shake that spills and melts everywhere, so be sure to grab a ton of napkins or take a big swig before you start walking with it. Despite being listed as cinnamon-spiced, the shake itself is just a simple vanilla shake with a consistency you’d find at In-N-Out Burger.

The green whipped cream is heavy on the sugar, so either mix it all up together well or skip it to avoid the added sugar rush. It doesn’t add much in the way of flavor, but makes for a festive photo.

The donut was light and well fried. It’s heavily dusted in cinnamon spice, so it has a bit of kick on the back end, but the shake cools it all down nicely.

It’s a fun holiday shake that’s nothing life changing, but if you enjoy donuts or milkshakes, it’s worth a try.

As you can tell, this isn’t quite as elegant as the picture advertises. We were struggling to find the smoked brisket. The two pieces of brisket we did find, we enjoyed.

The potato cake was fried crispy and had a good texture, and we loved the horseradish sauce on top, which wasn’t spicy at all. There were just far too many green onions and not enough meat to make this worth the price.

This could have been great, but we wouldn’t get it again due to the price and lack of brisket. Let us know if you tried it and had better luck.

For more sweet and savory options, check out our review of the new Pineapple Tres Leches Roulade and returning favorites for ¡Viva Navidad! at Paradise Garden Grill!