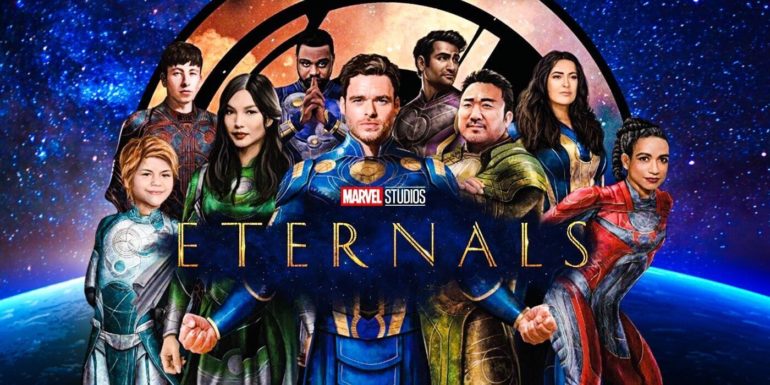 REVIEW: Marvel’s “Eternals” Feels Like It Lasts an Eternity, Tries to Feature Way Too Many Heroes

I think a lot of people are going to compare Eternals to Guardians Of The Galaxy, Vol. 1. Guardians was a risk because unlike Captain America, Thor or Iron Man, most people had never heard of these heroes. If Guardians proved one thing, it proved that you don’t have to have A-list superheroes in order to be a successful franchise, but what Guardians had that Eternals does not have, is a great cast with a lot of chemistry, a fun story and a better director.

The Eternals are a group of aliens with each unique superpowers that were sent to the Earth thousands of years ago to protect humanity from the threat of the destructive Deviants. Throughout the centuries, The Eternals use their powers to help and guide humans to progress and advance. Once all the Deviants appear to be eliminated, the Eternals disagree on how much of their involvement should effect humanity. Each Eternal decides to go off and live their own life and decide how they will contribute to Earth’s history. A tragedy occurs that leads to the revelation that the Earth will be destroyed and all of humanity wiped from existence. The members of the Eternals must be found and reunite if there is to ever be a chance of preventing the cataclysmic event from ever occurring.

The biggest problem with Eternals is that there are too many characters. There are 10 Eternals in all and good luck remembering all of their names. They could have easily scrapped at least 4 characters from the movie, bringing the characters down to maybe 5 or 6 at most. That leads to the next problem in that it is too long. At 2 hours and 37 minutes, the only other MCU movie that is longer than this movie is Avengers: Endgame. That is fine if you have a good story with interesting characters, but they kind of fail in both categories. It is basically a long journey trying to find each Eternal, and then once they are found, trying to convince them to help save the world. Another problem is that the story gets convoluted and will leave many confused at times, especially kids. The whole jumping around different periods of the Eternals time on Earth didn’t help and was poorly executed.

The two standouts are Gemma Chan as Sersi and Richard Madden as Ikaris. Gemma Chan is incredible and should be an example of, how sometimes, less is more. Chan throughout the whole movie has a kind and soft demeanor. Her character does not look to be thrust into the spotlight, but she is, due to her natural acting abilities. When she is on screen, you are focused on her and you look forward to her interactions with others or even with times when she is by herself. I cant say enough good things about Gemma Chan as I left the theater wanting to see more of her.

The other characters, and actors that portray them, are somewhat forgettable. The big surprise for me is that Angelina Jolie, who plays Thena, has a very small role in this. You would think that with all of the advertising for this movie that she would have a more prominent role in it. This isn’t a complaint at all. Like I said, sometimes, less is more. I will say that in every scene that she is in, she does a good job. Similar to Gemma Chan, her acting seems more natural and less in your face. The characters that were given the most dialogue were either uninteresting, annoying or not good actors.

When there is action or battles in Eternals, that is when the film shines. There are a lot of amazing fight scenes that highlights each heroes’ unique abilities. The special effects are also very impressive. Lately Marvel seems to be forcing way too much dialogue in their movies. That’s great when it works, but if it doesn’t, it’s just boring and people are sitting there praying for more action. There just isn’t enough action to save this movie from being overly long.

The big question that most people will have is where are the other heroes in the MCU? They know that they exist because they mention the events of Infinity War and Endgame and a ridiculous excuse for why The Eternals did not interfere and help to stop Thanos. They also mention Superman and Batman. So in a weird way, the heroes from the DC Universe could have also helped. Were they all on vacation? And as much as I love Superman and Batman, I find it a very controversial choice to promote the competition in a Marvel movie.

There are two after credit scenes. For a change, I think both of them are interesting and not necessarily throwaways. They both lead to an Eternals 2, which I couldn’t be less interested in seeing. They even say during the closing credits that The Eternals will return. Why would Disney green light a sequel even before they were able to measure the success at the box office for of an unproven franchise? It makes no sense.

Which brings me to the performance of The MCU’s Phase 4. Out of Black Widow, Shang Chi And The Legend Of The Ten Rings and Eternals, I enjoyed Eternals the most. With that being said, I don’t think I would want to see it again. I think that Marvel is making a mistake by pushing a lot of unknown properties without sandwiching them in between legitimate proven blockbusters. PT Barnum once said, “Give the people what they want and they will come.” Marvel seems to be doing the opposite and are giving the people what Marvel wants. I’m pretty sure that most audiences would have rather seen sequels to Captain America, Iron Man, Thor, Black Panther or Guardians Of The Galaxy.

So far, none of the Phase 4 entries have been must see movies, and neither have any of the Disney+ series either. Marvel seems to want to push a completely different and new group of superheroes on us, but so far, they aren’t doing a good job. They are relying too much on the fact that audiences will continue to follow Marvel because the Marvel stamp or logo is on the movie title. Marvel should ask Star Wars how that worked out for them.

Eternals has several things going for it. When there is action on the screen, it is really well done. The special effects are top notch. Gemma Chan practically saves the movie by herself just by her performance. Ultimately, it’s a long movie, that can be confusing at times, filled with uninteresting superheroes and its no Guardians Of The Galaxy.