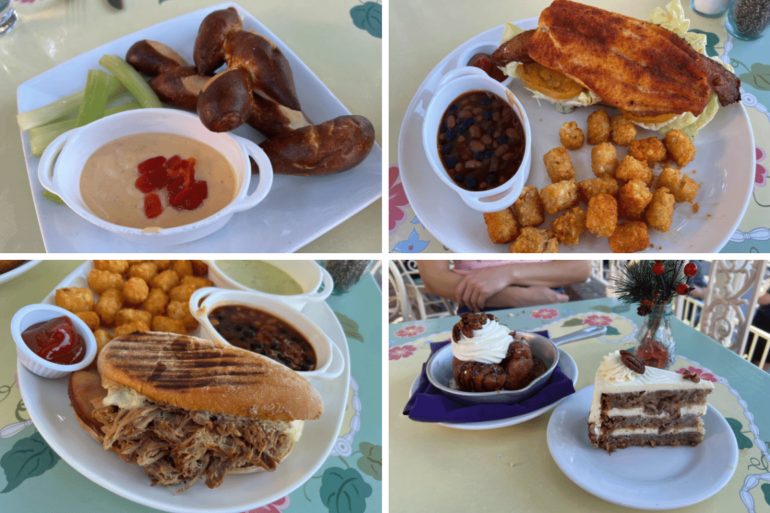 Fall at Disneyland has brought new food to the park. So recently, we headed to Frontierland to try out the seasonal items at River Belle Terrace!

When we arrived, we received this menu with gorgeous artwork of the Mark Twain Riverboat.

While they’re not specifically listed on the menu, some of these items are only around for a limited time. Let’s dig in!

A nice dish. The cheese came out nice and warm, with the pretzel bread a pleasant accompaniment with how soft it was. The cheese has a rich pimento flavor, and there’s plenty of it to douse each bite with.

This is not a seasonal item either, but we both had to eat. So I tried another entree we had not tried before. Since I’m not a fan of open-face sandwiches, I simply didn’t eat the bread. I tried a little, and it was fine, but it wasn’t necessary. The dish comes with a healthy piece of catfish that was well-prepared and nicely seasoned with a somewhat spicy finish.

The tater tots were hot and fresh, with a good crunch and soft interior. They were a little salty, but not overly so. The beans were standard in our estimation.

Again, the fish was flaky and flavorful. The thick-cut bacon underneath was a good addition as well, bringing some different flavors to the dish. We would definitely order this again.

A holiday season offering, this isn’t a traditional Cuban sandwich, as you might’ve guessed by the word “country” in the name.

Pulled pork joins country ham in this interesting take on a classic, with a nice topping of Havarti cheese. Havarti has a buttery aroma and can be somewhat sharp in the stronger varieties, much like Swiss-type cheeses. The taste is buttery, from somewhat to very sweet, and slightly acidic.

Everything is in harmony here: the pork is tender and juicy, the ham is salty and not at all rubbery, and the cheese brings a nice, sharp flavor. The bread is the star as it is beautifully toasted, making each bite a pleasant crunch.

The sauce didn’t enhance it much. We had one bite with it and just went back to the sandwich as-is. As stated before, we loved the tater-tots, and the beans were just alright.

There’s also a fair amount of mustard on this, but not too much. It doesn’t overpower things, just adding a slight tinge to each bite.

Living in Florida, we are used to a very different flavor profile in hummingbird cake, so we were put off a bit by the first bite. Once we tried it again, we were much happier with it. It’s hard to enjoy a bite of something when you expect one thing and taste another.

What we found here was predominantly pineapple in flavor with a banana undertone. The tropical flavors mixed with the super sweet frosting made for an enjoyable cake slice, albeit dense and heavy.

I would still have this again despite my first thoughts.

The server told us the seasonal monkey bread was cinnamon, but I think cinnamon sugar is the proper description. I’d equate it to the flavor of Cinnamon Toast Crunch but in a baked pastry.

It was good, as the monkey bread usually is, but I think I prefer the hummingbird cake.

In the end, I think I expected the bread to be softer. It’s not that it wasn’t fresh or hot; maybe it was just a little overcooked as it was much crunchier than other versions we have had at this restaurant.

Of course, the holiday season has brought even more new food, so be sure to check out our review of the new sausage and provolone burger at Galactic Grill!