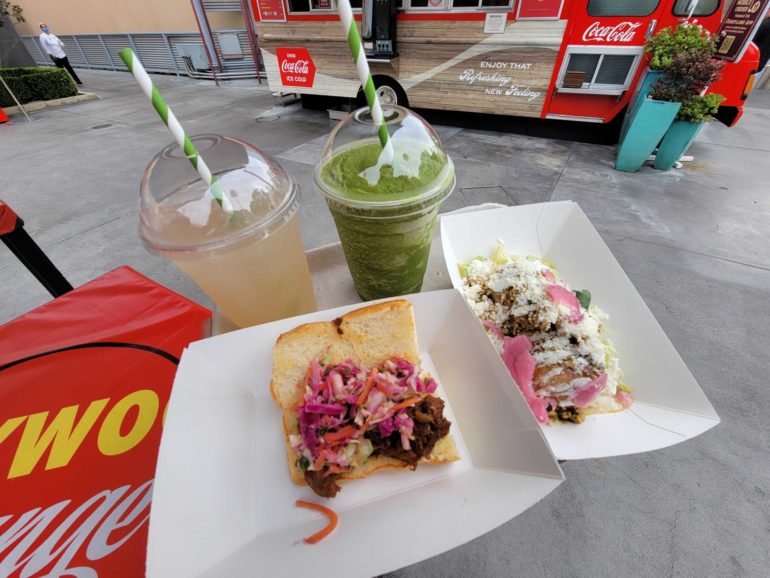 During our most recent trip to Disney California Adventure, we stopped by Studio Catering Co. to review their new Lunar New Year items, which arrived early at the park.

These are fine. They’re a little heartier and more satisfying so far as the quality of food — it’s not fried, and it’s real pork on a fresh Hawaiian roll.

That being said, the flavor is just okay. They’re pretty salty, which can be expected from hoisin sauce, but there’s just not a lot beyond that and the umami flavor.

There’s nothing wrong with this dish, but it’s not the greatest.

This was just weird. It tastes like lipstick and chalk dust in slush form. But that’s just what green tea flavor tastes like in desserts, so it’s nothing against the slush; it’s just not for us.

Mercifully, it’s not very sweet. It’s a palatable, drinkable slush, unlike so many others that overindulge on sugar.

Over a long period of time, the ice melts and dilutes it a bit, making it more enjoyable. This is good for fans of matcha green tea-flavored sweets, but definitely not for the uninitiated.

This drink is fantastic. Disney California Adventure has had at least one or two great craft lemonades at recent festivals, and this keeps the trend running.

The lemongrass and ginger are both present but don’t overpower the tartness of the lemon. It’s a perfectly balanced, sweet drink that is just as satisfying on a cold January day as it would be on the hottest day of the summer. It’s light and refreshing, and a perfect complement to the Lunar New Year festival that’s just about to start. We’ll be returning for this as often as possible.

Are you excited to chow down on these new delectables? Let us know in the comments below!