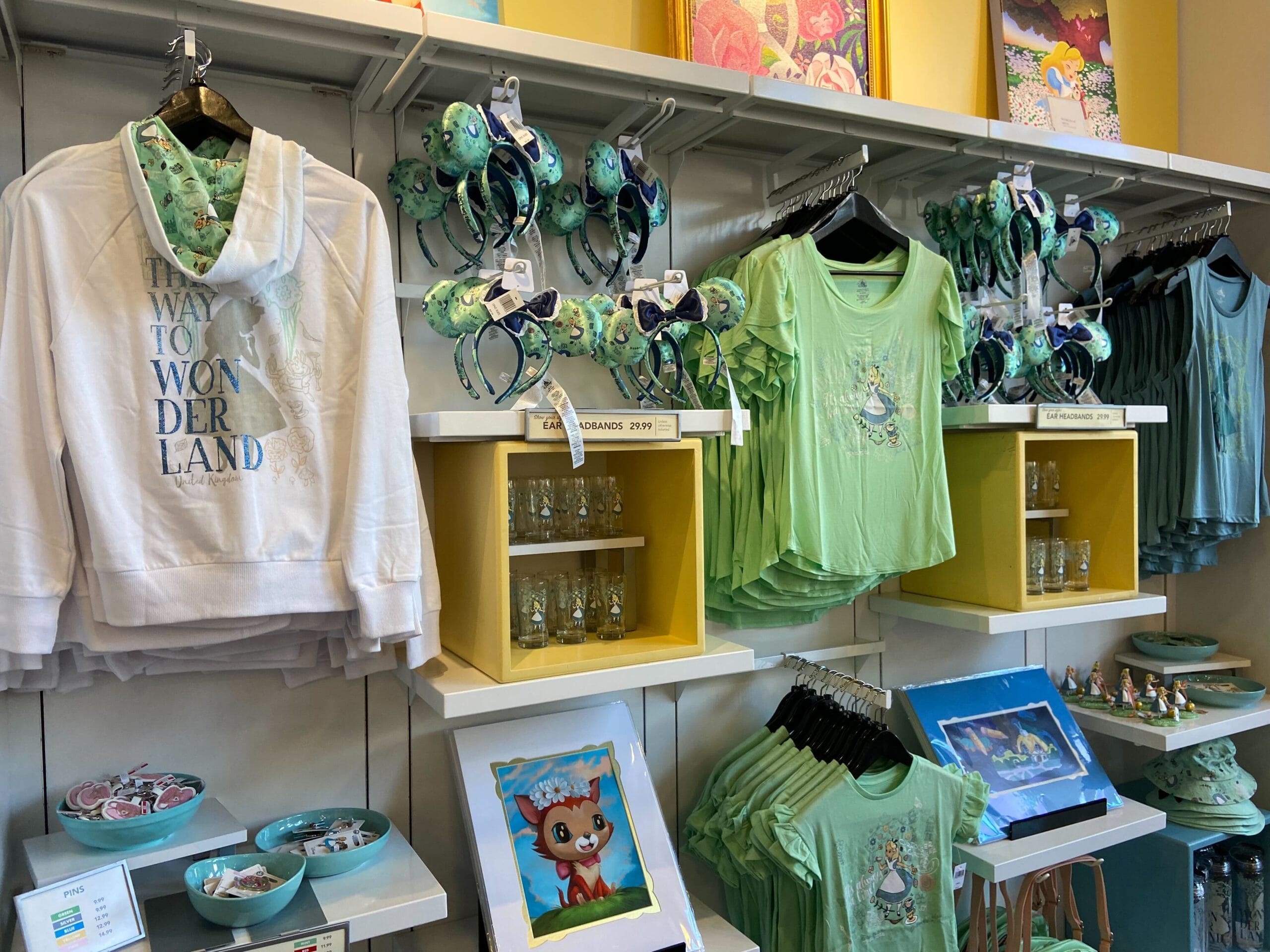 A new “Alice in Wonderland” merchandise line, first seen at Walt Disney World, has just arrived at Disneyland. You can find all of these items at WonderGround Gallery in Downtown Disney District.

This blue tank top says “This way to Wonderland.”

Alice’s silhouette is amidst the light green outlines of a floral archway and “Alice in Wonderland” characters.

This green shirt features Alice on the front.

She’s surrounded by tea cups, mushrooms, U.K. buildings, and other characters from “Alice in Wonderland.”

This is similar to the tee above, but for children.

It has ruffled sleeves.

This tall glass features Alice on one side.

This magnet shows Alice against a green background featuring tea cups and a floral archway.

We also found a couple of new “Alice in Wonderland” pins.

This pin showcases Alice in a bed of white flowers.

Alice is holding the classic “Drink Me” vial on this pin.

And this pin is themed to Mad Tea Party attraction in Disneyland.

This keychain features a furry pink teacup. On the back, it says “Let’s go for a spin.”

This bucket hat is a teal green color with a dark blue ribbon around it.

“This way to Wonderland” is embroidered on it.

The ribbon has a bow on one side.

The inside is patterned with “Alice in Wonderland” characters and icons.

This clear water bottle says “This way to wonderland” in blue lettering with “United Kingdom, EPCOT World Showcase” underneath it.

A silhouette of Alice is on the other side.

This green crossbody purse has a pink strap.

The front has an image of three teacups spilling sparkling gold tea over one another. There is also Alice’s silhouette.

The back of the purse shows some London icons, including Big Ben and a double-decker bus.

It has a zip enclosure with a pink lining on the inside.

This hoodie is white and has Alice’s silhouette on the front with the word “Wonderland” in green.

It says “This way to Wonderland” on the back with Alice’s silhouette.

The interior lining is green with an all-over pattern.

Some of the flowers from “Alice in Wonderland” are printed on the pocket.

This cute ornament features Alice standing on a patch of grass.

She is sipping on a cup of tea and is standing next to a golden teapot that says, “It’s always tea time!”

It says “United Kingdom” on the grass in white lettering.

The ears feature a silky, turquoise material with an all-over Alice print.

The print includes Alice, the Cheshire Cat, and teacups, along with various United Kingdom icons.

The navy bow has white lace around the edges, much like Alice’s iconic dress.

The headband has a navy blue velour lining.

The outside of the headband has the same print as the ears, with embroidery on each side.

One side says “It’s always tea time!” and the other says “United Kingdom” in dark blue lettering.

Will you be purchasing any item from this “Alice in Wonderland” collection? Let us know in the comments!