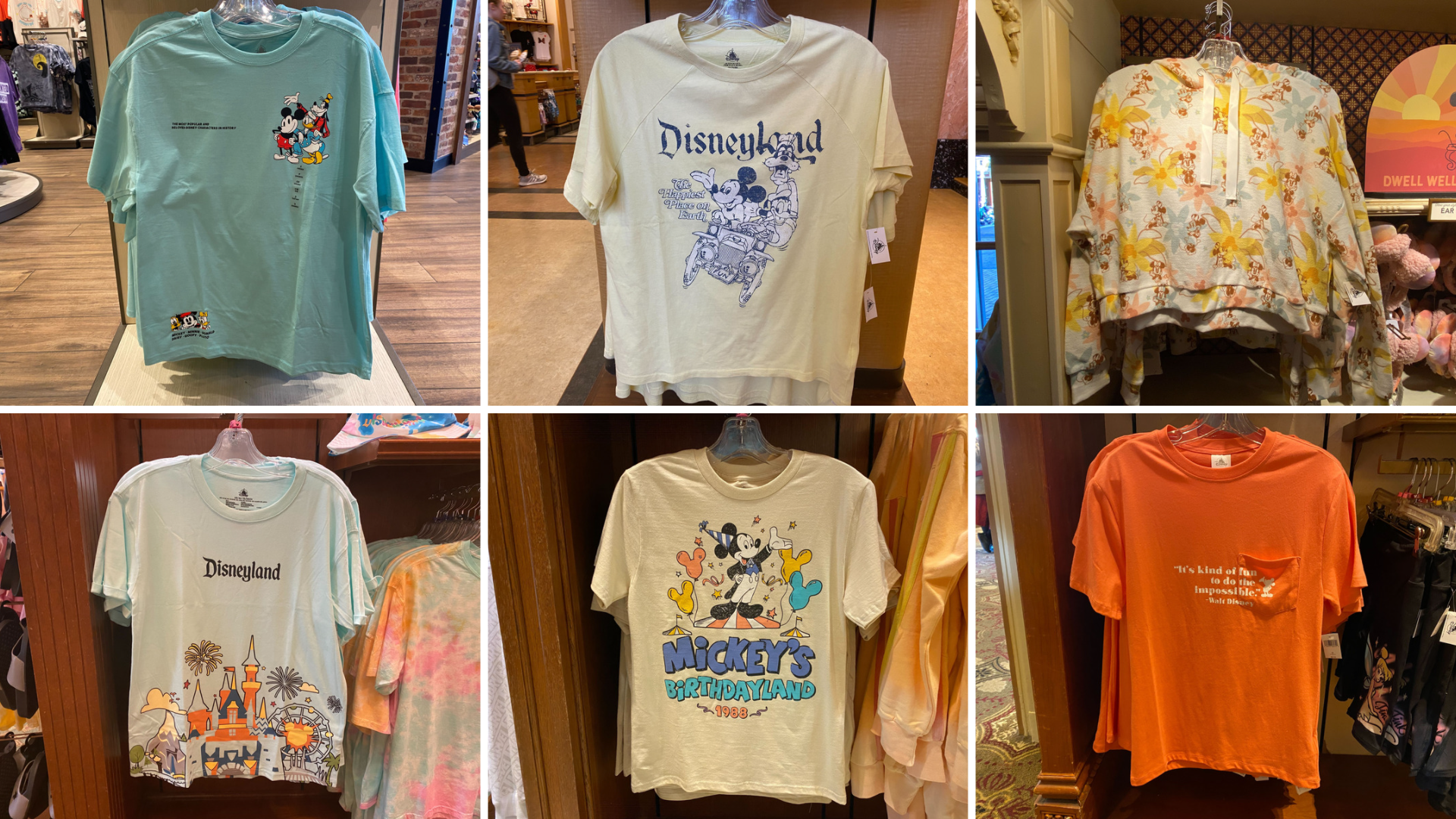 First up, we found this sweatshirt and matching crop top (below) at Disney Clothiers Ltd. in Disneyland. They both are part of the “Be Happy” collection.

The pullover sweatshirt has a hood with a white ribbon.

It is patterned all-over with Minnie in different positions, as well as yellow, blue, and pink flowers.

This crop top is a pink-orange color.

It features Minnie and Mickey with their noses together and surrounded by flowers on the front left.

It has a tied waist.

The same image of Mickey and Minnie is larger on the back of the top.

This orange tee was in Disney Showcase.

It reads “It’s kind of fun to do the impossible” in white lettering on the front. The quote and attribution (Walt Disney) crossover the breast pocket, which also features Mickey’s silhouette.

This tee was in Los Feliz Five & Dime at Disney California Adventure.

It’s an off-white color and features Mickey on the front with balloons, stars, streamers, and circus tents around him. He wears a pointed birthday cap and it reads “Mickey’s Birthdayland” below him. This “temporary” land opened in Magic Kingdom in 1988 to celebrate Mickey’s 60th birthday and was later transformed into Mickey’s Toontown Fair.

This pale blue tee has the Disneyland logo in black on the center front.

Disneyland Resort icons are featured in outline with selective colors along the bottom.

The Matterhorn, Sleeping Beauty Castle, Space Mountain, and Pixar Pal-A-Round are all pictured beneath clouds and fireworks.

This tee and the one below were in Elias & Co.

Next to them, it reads “The happiest place on Earth.” The lettering and image are distressed for a vintage style.

This tee was available in World of Disney at Downtown Disney District. It’s a teal blue, with several images of Mickey and friends.

It reads “The most popular and beloved Disney characters in history” in small black lettering on the front. Mickey, Goofy, and Donald are pictured to the side.

Minnie, Pluto, and Daisy are in a box near the bottom, with the names off all the Sensational Six below them.

All six characters are on the back.

Below the image, the shirt reads “The Sensational Six is the collective name given to the group of main characters of the Mickey Mouse and Donald Duck cartoon series and franchises.”