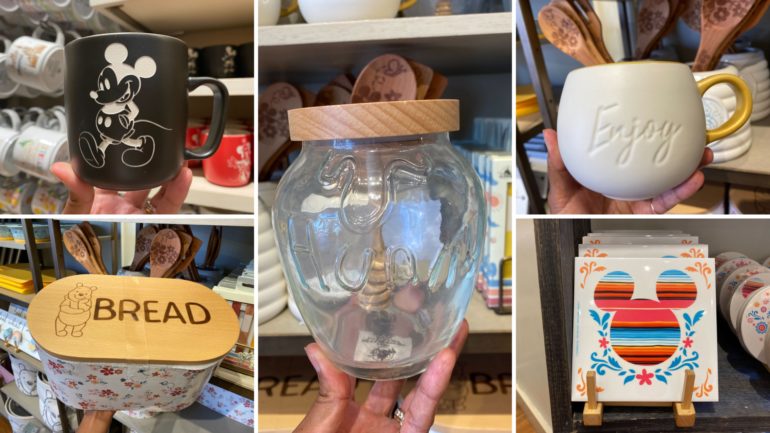 Some new kitchenwares featuring Winnie the Pooh, Mickey, and Minnie have arrived at Disneyland Resort. We found most of these items in the Disney Home store at Downtown Disney District.

This jar has a wood lid featuring Pooh bear and a bee.

The glass jar has “Hunny” embossed on it, as well as some clear hunny drips.

A honey dipper hangs from the lid into the jar.

This white mug is debossed with a Mickey head on one side and “Enjoy” on the other side.

The handle and rim are golden yellow. The inside is blue.

This bread box is white with flowers, bees, and butterflies on it.

The wood lid features Winnie the Pooh and reads “bread.”

This flip countdown calendar has three rings with sets of cards on them.

The first two card sets have numbers, while the third card can have a month or what you’re counting down to.

One of the cards reads “Days until Disney vacation.”

Another reads “Days until school’s out.”

A metal Mickey silhouette stands on the wooden base next to the calendar.

This trivet is white with a colorful striped Mickey head at the center. Flowers and other wavy designs are in blue, pink, and orange around the Mickey head.

It is cork on the bottom.

This matching cup has two sets of colorful stripes at the top and bottom.

This set includes four coasters, two of which are hidden.

One features an intricate, colorful design of flowers and hidden Mickeys.

Another coaster features the same striped Mickey head as the trivet.

This white mug has the same intricate, three-pronged design as the coaster above.

The design is repeated twice on the mug.

This magnet has the same design as the trivet, but the Mickey head pops out.

It has some extra flowers and designs on the back.

This collection originated at the Mexico Pavilion in EPCOT.

This mug is black. Mickey is embossed on the side and filled in with white.

His autograph is in white on the other side.

The inside of the mug is also white.

This matching Minnie mug is red with Minnie in white on one side.

Her autograph, dotted with hearts, is on the other side.

These two mugs were in World of Disney.