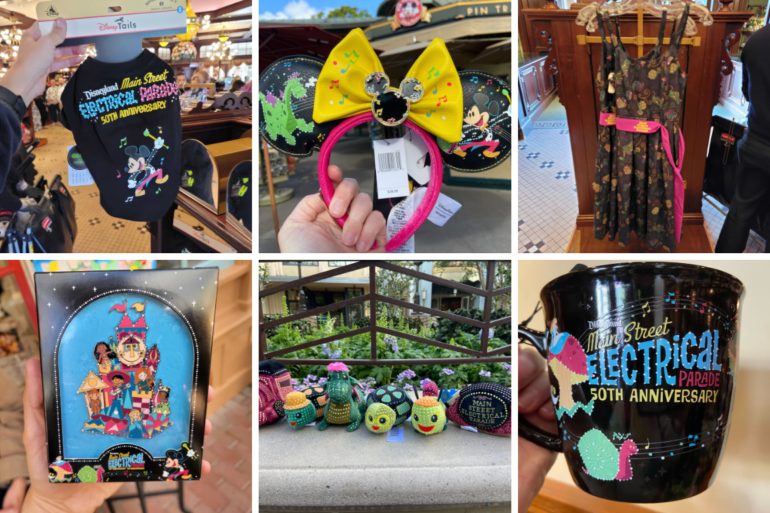 PHOTOS: Check Out Every Piece of 50th Anniversary of Main Street Electrical Parade Merchandise (with Prices)

The Main Street Electrical Parade makes its official return tonight at Disneyland. In celebration of its 50th anniversary, a merchandise collection was released.

Mickey Mouse kicks things off on this mug, leading a parade of classic parade floats.

When hot water is added, hidden art is revealed, adding a new layer of magic!

We found the mug at Elias & Co. in Disney California Adventure.

For a dash of color to any affair, there’s this dress, which features artwork of the floats on a black background.

The name of the parade can be seen on an electric purple sash.

Even four-legged friends can get in on the fun with this pet Spirit Jersey!

We found both the dress and the Spirit Jersey in the Emporium in Disneyland.

This ear headband from Loungefly is sure to brighten up any night!

This pin folds out to reveal scenes of Alice on her mushroom, as well as Captain Hook on his pirate ship.

We found the ear headband and the pins at Disney’s Pin Traders in the Downtown Disney District.

This pin is themed to the new “it’s a small world”-inspired float that serves as the parade’s finale.

The return of the parade also brings the return of Elliott, and you can bring him home for yourself with this adorable plush.

The 50th anniversary logo can be found on his foot.

Want even more Elliott? The dragon is also the subject of the open edition Wishable in the set.

Meanwhile, the Mystery Bag selections are also “enlightening,” as they glow in the dark!

The turtle with a straw hat serves as the chaser Wishable. Be sure to keep an eye out for it!

The sparkling turtle comes complete with its glasses and tie.

We found the Wishables at the Emporium in Disneyland.