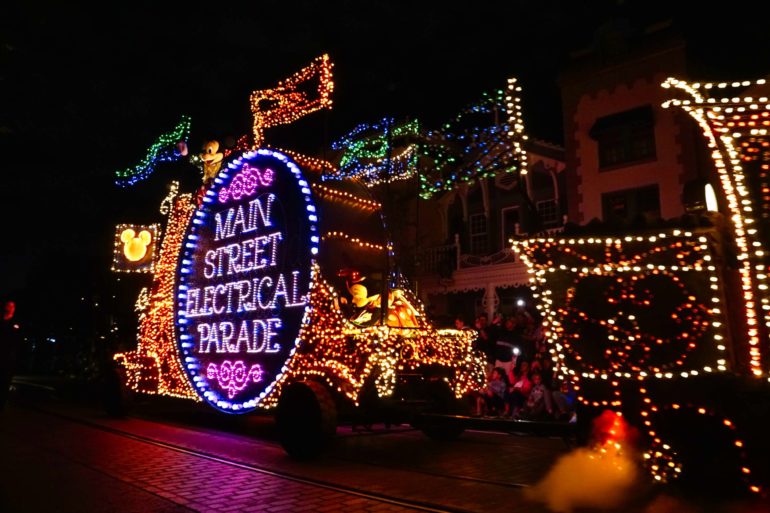 The morning was about the new merchandise being released to celebrate the Main Street Electrical Parade’s return. And chief among the exciting merchandise is the popcorn bucket and the sipper. We rushed in to get in line for a bucket straight away. Near the Matterhorn, the lines were long, but not nearly as long as those on Main Street, U.S.A.

A helpful Cast Member tipped us off that the popcorn cart near “it’s a small world” had fewer people, and luckily, we made it in time. After a short wait, we grabbed our Elliott popcorn bucket!

The popcorn bucket comes with the popcorn on the side, so the bucket doesn’t get greasy. The bucket is sold from this popcorn stand with the Electric Sweet & Salty Popcorn, a combo of kettle corn and traditional buttered popcorn. Take a look at our review right here.

We also got the turtle sipper on Main Street, U.S.A., in what turned out to be a surprisingly quick-moving line at Refreshment Corner.

In the Emporium, merchandise flew off the shelves. After the initial crush of guests swarming like locusts, Cast Members pulled all the MSEP merchandise back behind the counter to be dispersed at the point of sale.

We ended up getting a fair selection of the Wishables in a lucky grab bag, with a limit of five blind bags per guest sold without the opportunity to feel through the bag first.

Luckily, another guest traded one of her spare glasses turtles for one of our extra trains so we could complete our set.

Throughout the day, we did get to see much of the merchandise that was available, including pins, a fancy dress, a mug, these cute ears, and more. Take a look at the whole collection right here. Much of the collection is also available on shopDisney, so you can still celebrate at home if you can’t make it to the park for the parade.

With our favorite souvenirs in hand, we took a snack break.

We tried a smattering of new dessert treats from Jolly Holiday Bakery Cafe, including this Mine Cart Brownie. Take a look at everything we had right here.

We headed up to Fantasyland for the Pineapple Night Light drink at Red Rose Taverne to whet our whistles. Take a look at our review right here.

And for something a little more hearty, we hit up Refreshment Corner again for the Electric Relish Hot Dog, which surprised us at how good it was. Take a look at our reviews of this and the Firefly Chips.

Hunger sated, and we set off into the park again. New maps were released today featuring the return of the MSEP.

The Electric Relish Dog and the Uni-cone are the featured food items inside.

Interestingly, the Toontown area of the new map is greyed out rather than outright removed. Toontown is closed as it is reimagined, and a new ride is created.

Churro time! This classic churro is paired with a citrus buttercream frosting dip called the Electric Sprinkle Dip. You can read our full review right here.

The Parade Dreams Churro is covered in sparkle slime, Nerds candy, and yellow sugar. Take a look at our full review right here.

The Blueberry Looks Good on You Churro is a mouthful of a title, and we had to get a mouthful of the treat pronto. Read our full review right here.

After finishing off with something cool, we tried the Uni-cone mentioned in the new map. You can read our full review right here.

Waiting for the Parade

And then it was the moment we had been waiting for since we walked in the gates — camp out time. We propped ourselves up on Main Street, U.S.A., in our favorite parade-viewing spot with plenty of snacks and provisions, and waited for nightfall.

The park was full of bloggers, Instagrammers, social media influencers, and die-hard fans dressed up in costumes and talking to their followers all over the park. These folks looked great as they held a live stream from Main Street, U.S.A.

Luckily, characters came through to say hello and keep all the waiting guests entertained throughout the day.

Mickey boogied down the street with the Disneyland band and stopped to wave and say hello to everyone waiting.

Finally, dusk settled in, and the parade crowd arrived in earnest.

Specialty packaging for the classic parade-viewing treats was brought out on carts.

And that same Electric popcorn is available in a themed bag during the evenings.

These fantastic new MSEP balloons are cute during the day…

and even light up at night.

Speaking of lighting up at night, the popcorn bucket and sipper also light up, making for a personal Electrical Parade playtime.

Mickey came back out before the parade to shake hands and say hello before heading backstage to board the float and join the parade.

Finally, after all that waiting, the Main Street Electrical Parade finally arrived. The parade is celebrating 50 years with its return.

With the arrival of the new finale float, the buildings on Main Street, U.S.A., come alive and sparkle to life with projection mapping to make the finale take over the entirety of the parade route.

Sleeping Beauty Castle, the Matterhorn, and “it’s a small world” are also brought to life with projection mapping for the finale.

The new float replaces the classic “To Honor America” float and adds some of the more recent Disney characters to the lineup.

Encanto is also represented as the newest Disney hit.

You can see the full video of the Main Street Electrical Parade’s return on our YouTube channel or by clicking the video below:

With the Main Street Electrical Parade passed through, it was time to fill the streets for the return of the Disneyland Forever fireworks show. You can watch the whole show with us on our YouTube channel or by clicking on the video below:

With both Disneyland nighttime spectaculars out of the way, we rushed over to Disney California Adventure for the second showing of World of Color, which also returned tonight.

The night sprang to life in a dazzling array of colorful fountains and scenes from our favorite Disney films.

We even caught the subtle nod to Squirt, the former mascot, taking the final bow.

You can watch the entire show along with us on our YouTube channel, or by clicking on the video below:

We ran back over to Disneyland to finish out the night and caught the tail end of the second showing of the Main Street Electrical Parade as it was finishing its night up near “it’s a small world.”

Shortly after the parade ended, the facade of “it’s a small world” sprang to life in the We Don’t Talk About Bruno projection show. You can see it all on our YouTube channel or by clicking the video below:

And from 7 p.m. to close, Magic Key Holders can take a new complimentary Magic Shot at the “it’s a small world” promenade to celebrate the return of the Main Street Electrical Parade. We got to meet a couple of the floats (digitally, of course).

Are you excited for the Disneyland Nighttime Spectaculars to return? Let us know in the comments.