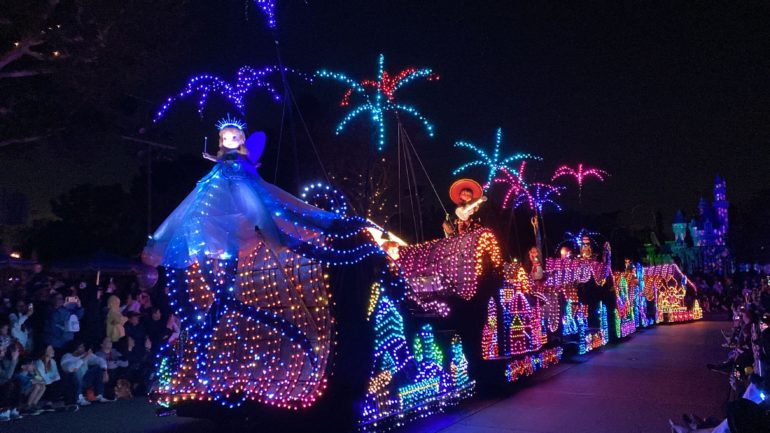 Disney treated us to a surprise this evening with a preview showing of the Main Street Electrical Parade before its official return this Friday, April 22. The performance tonight was broadcast live but we were there in person to get photos and video to share with you.

The parade is celebrating its 50th anniversary this year. It began with a special pre-announcement — “Fifty years ago, a magical parade sparkled to life, bringing joy to the young and the young at heart. Alive with imagination, it continues to grow, welcoming new friends and stories, inspiring new generations, and shining into our hearts with its heritage of hope. For its magic celebrates togetherness and the spirit of Walt Disney’s words that welcomed the world.”

The parade then opened with its new, more inclusive announcement: “To all to come to this happy place, Disneyland proudly presents our spectacular festival pageant of nighttime magic and imagination. In thousands of sparkling lights, and electro-synthe-magnetic musical sounds: The Main Street Electrical Parade!”

Since the parade is celebrating its 50th anniversary this summer, a special “50 Years” icon has been added to the Casey, Jr. drum float.

Classic floats like Pete’s Dragon and Cinderella returned as well.

A new finale float also made its debut tonight. It replaces the “To Honor America” float and is designed as an homage to Mary Blair and “it’s a small world.”

The new float features a medley of Disney songs set behind “it’s a small world”. We caught “Bare Necessities”, “How Far I’ll Go”, “A Whole New World”, “Give a Little Whistle”, “The Family Madrigal”, “I’ll Make a Man Out of You”, “Touch the Sky”, and “Go the Distance”.

Watch our full video of the first return performance of the Main Street Electrical Parade below.