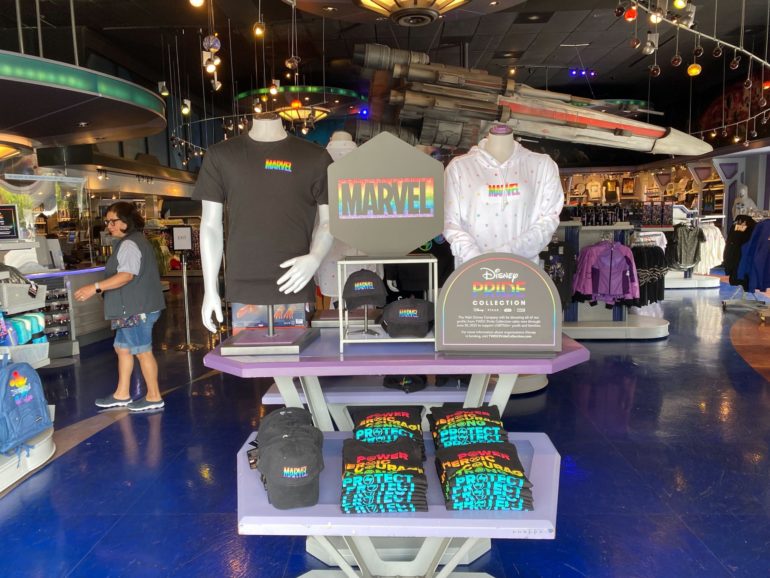 Following the controversy surrounding the “Don’t Say Gay” bill in Florida, Disney’s 2022 pride collection is now available at Walt Disney World and Disneyland Resort. This year’s collection is the first to be branded the Disney Pride Collection, instead of the Rainbow Disney Collection. The collection includes “Star Wars” and Marvel designs, and was designed by members of the LGBTQIA+ community and allies.

Unlike previous years, 100% of profits from the collection will go to LGBTQIA+ organizations from now through June 30, 2022. Previously, only a small percentage of profits went to LGBTQIA+ communities.

In addition to Mickey pride merchandise, there are also “Star Wars” and Marvel collections.

Much of the Marvel collection and Mickey collection were in Star Traders at Disneyland.

We found more in Disney Clothiers Ltd. and the “Star Wars” collection in the Emporium.

This black ball cap has a rainbow ombre version of the Marvel logo on the front.

Rainbow Marvel symbols are on the back, including symbols representing Spider-Man, X-Men, Captain Marvel, the Hulk, Ms. Marvel, and Black Panther.

This tee is black with the rainbow Marvel logo on the left breast.

The back reads “power, heroic, courage, strong, protect, bold,” with the “o”s of each word replaced with a superhero symbol.

The letters and symbols are printed in a rainbow ombre.

This tee is white with the Marvel logo printed on a rainbow stripe.

Below the Marvel logo are the same symbols from the ball cap.

This black hoodie zips up and has pockets on the front.

The Marvel logo is embroidered in rainbow colors on the left breast.

The same six superhero symbols are printed on the back in an ombre rainbow circle.

This button-up is white with an all-over pattern of colorful Marvel symbols.

In addition to some of the symbols featured on the other merch, we also spotted logos representing Iron Man, Captain America, Black Widow, Hawkeye, Thor, and Doctor Strange.

This pullover hoodie is white with the same all-over symbols print as the button-up.

The rainbow Marvel logo is embroidered on the chest.

The black hoodie has the Marvel logo in a rainbow box on the front.

The left sleeve is printed with the same symbols of superheroes in an ombre rainbow.

This set includes two scrunchies. One is black and patterned with rainbow silhouettes of Minnie Mouse.

The other scrunchy is rainbow with images of Mickey’s face.

The tumbler is black with thin rainbow stripes at the top and bottom.

“Pride” is across the center in rainbow lettering.

A Mickey head dots the “i.”

The cap is clear, and it includes a red straw.

This set includes a matching leash (or lead) and collar for your pet.

They come in different sizes.

Both have a rainbow ombre patterned with Mickey silhouettes.

The leash clip and collar buckle are blue.

A rainbow charm with Mickey ears hangs from the collar.

This blue backpack features Mickey on the center.

Mickey is made of an ombre rainbow, and “Disneyland Resort” is embroidered in white over him.

The Disney Pride Collection logo is in the corner of the front pocket. “Pride” is in white lettering on a black patch, but the “D” is a rainbow Disney “D.”

The interior has small pockets.

Mesh pockets are on the sides.

This youth pullover hoodie is white with an all-over pattern of rainbow Mickey silhouettes.

The “Pride” logo is embroidered on one sleeve.

This second backpack is black with an all-over rainbow Mickey silhouette pattern.

It has a large front zip-up pocket and a main zip pocket.

The interior is solid black.

The straps are adjustable and detachable, so you can convert it to different styles.

This throw blanket comes folded and wrapped in a black ribbon.

The tag shows off the full throw design, which is an ombre rainbow with a heart in the center.

A rainbow Mickey head is at the center of the heart.

This ornament is shaped like Mickey’s head, with his ears, eyes, nose, and mouth as a rainbow.

The rest of his face is in white.

It comes on a red ribbon.

The back is a plain rainbow.

These black shorts are patterned with rainbow silhouettes of Mickey.

The Pride Collection logo is at the end of one leg.

It has a black drawstring, emerging from small Mickey-shaped charms.

One pair is black, with Mickey and Minnie made out of rainbows.

The other set is striped with a rainbow. One has black Mickey heads, while the other has black Minnie bows.

This button-up is black.

It has an all-over pattern of rainbow Empire and Rebellion logos merged together.

This tee is solid white.

On the chest pocket is the “Star Wars” logo overlapping with the Rebellion logo and creating a rainbow of colors.

The Pride Collection logo is embroidered on the sleeve.

The back reads “belong, believe, be proud” in rainbow lettering next to the Millennium Falcon.

This black cap has the same rainbow ombre of the “Star Wars” and Rebellion logos.

The “Star Wars” logo is also on the back in a rainbow stripe.

A youth t-shirt features the “Belong Believe Be Proud” slogan with a rainbow BB-series droid.

Or you can get a zip-up hoodie with a rainbow ‘Star Wars’ scroll-style logo.

The Star Wars logo and the Millennium Falcon are on the sleeve.

We found this in Elias & Co. at Disney California Adventure.

It is a light heather grey with a rainbow Mickey on the back. “Love” is printed in black over the mouse.

Over in World of Disney, we found the Pixar Pride collection. This tie-dye youth tee has the Pixar logo in a rainbow of colors. Mr. Incredible, Nemo, Woody, Mike Wazowski, Sadness, and Princess Atta are above the letters.

Another youth tee features the logo for Pixar Animation with a Little Green Man in the middle.

The Disney Pride logo is on the sleeve.

An adult-size tee is available in charcoal with rainbow versions of the logo featuring Luxo Jr. and the Luxo Ball.

A pair of gray sweatshorts have the rainbow Luxo Ball logo on the right leg.

The gray sweatshirt has the Pixar Animation Studios logo featuring Luxo Jr. and the Luxo Ball on the front.