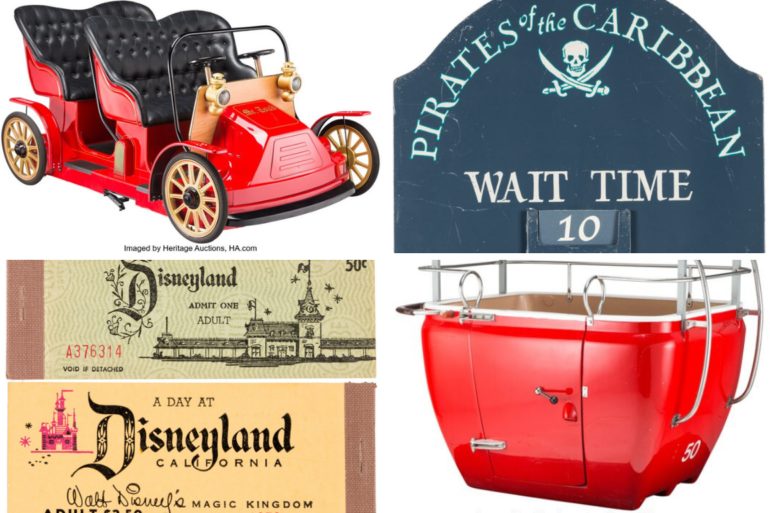 Nearly 700 lots from one of the most significant assemblages of actual park-displayed signs, props, artifacts, and more from Disneyland and Disney theme parks around the world will be offered May 21-22 in Heritage Auctions’ DISNEYLAND: THE AUCTION Signature® Auction.

The founder of the collection, Scott Rummell, is instantly recognizable, even to those who don’t know his name. He is a renowned voice actor who has lent his voice to everything from Marvel movie trailers to countless commercials and voiceovers on networks ranging from CBS to CNN.

Disneyland was part of Scott’s life since he was young. His wife, Terry, collected Donald Duck. In 1982, after they were married, his parents gave the young couple annual passes, after which “Disney wasn’t ‘something we did,’” Scott says. “It became our lifestyle.”

“At one point, we had one room that was our Disney room – that was where we had it all displayed,” he says. “When we moved into the house, we thought it was crazy to have all these posters rolled up in tubes, so we hired people who worked for Disney to redesign the house specifically for the collection. It was really awesome, what they did with certain pieces in mind.

“It became something that was really special. We loved to open up the house. We had events for Children’s Hospital and other organizations. A lot of people who love Disney came to the house. People ask ‘how can you let the collection go?’ … and it’s a valid question. I feel a little bit like an artist who spends considerable time on a painting and then sells it. You have time and energy invested, but it’s time to share it with other people.”

The sale includes a Complete Park-Used Original Autopia Car with Original Body, Chassis, and Tires — “the first car I ever drove,” Scott says. Used at Disneyland and acquired directly from the park, it is believed to be the single Autopia vehicle to ever come to auction with all original components present, including the chassis and tires (with the exception of the engine, which was not allowed to be sold for safety reasons).

Collectors also can press the gas in their efforts to land a Park-Used Original Mr. Toad’s Wild Ride Vehicle from one of the Magic Kingdom’s original opening-day attractions in 1971 through 1998. Modeled after the Disneyland attraction, it had some unique characteristics that set it apart from its West Coast twin, like the ride vehicle’s added back seat, which was added in 1993. This amazing piece has been professionally restored and repainted with added features like spinning wheels and working headlights. Only a limited number of these vehicles were made, and of those only a handful ever made it to market.

Among the rarest Disney attraction vehicles, a Park-Used Original Skyway Gondola is from the Disneyland hallmark that stretched across the park from 1956-94, carrying guests into the skies. In 1965, Disneyland switched from the original round gondolas to rectangular versions that were not as cramped, and could accommodate up to four passengers. Everything on this example – the “bucket,” the seats, the rails, the roof, the lights – is original, and what makes this gondola even more impressive is the fact that the lights have been rewired and now are fully functional. This vehicle is believed to be one of the rare examples that traveled over both Disneyland and Walt Disney World.

When entering one of the Disney parks, the first thing guests always did was pick out the day’s ticket book, which included tickets for that day’s rides. The sale includes 17 lots of tickets, including a Complete 1956 Disneyland Ticket Book from the park’s second year.

“It was a glorious moment when you got your ticket book,” Scott says. “You were going to go on this ride, or you were going to do that today. It was a big part of the day. When you have full ticket books, with the admission still attached, it is such a rare piece. These are paper items that were mostly torn apart and exchanged for the experience you were getting that day. It was a huge part of Disney history.

For images and information on all lots in the sale, visit HA.com/7258.