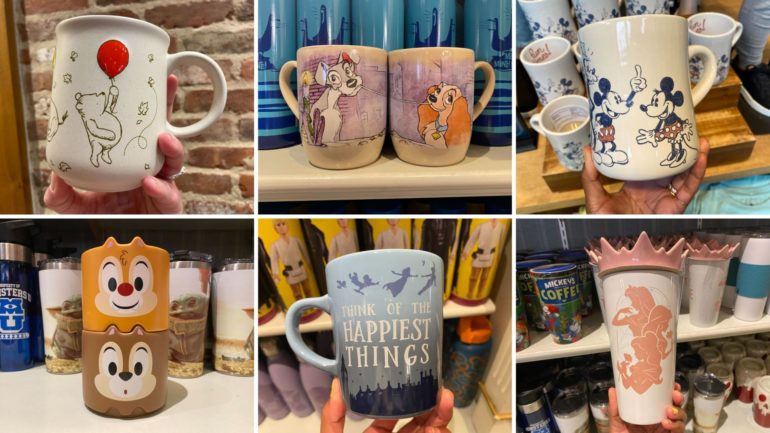 This mug features Tramp on one side and Lady on the other, with a string of spaghetti connecting them.

The mug has a watercolor-like background of the alleyway featured in the movie.

The plate of spaghetti with meatballs is partially visible between the dogs.

The inside of the mug and the handle are off-white. It reads “you had me at spaghetti” in purple cursive inside.

This mug reads “think of the happiest things” in white lettering, with the silhouettes of the “Peter Pan” characters flying above the London skyline.

The image repeats on the other side of the mug.

It is light blue, while the silhouettes and skyline are dark blue.

This mug is white. The pink, sparkly silhouettes of Aurora, Jasmine, and Belle are on one side.

Geometrical blue lines criss-cross behind them.

It includes a pink crown-shaped lid.

The other side reads “Sparkle all the time.”

These stackable Chip and Dale mugs are sold separately.

Chip (who has a small black nose) has a darker brown mug. His face, with a slightly surprised expression, is on one side. His ears stick out of the top and there are two divets at the bottom for stacking him and Dale together.

Dale has a big red nose and a smile on his face. His mug is a light brown color.

“Fun times!” is printed in red on the inside.

This mug is white with subtle grey speckles across it. Pooh bear is holding a red balloon on one side.

Eeyore is pictured with a yellow balloon tied around him. The characters are black and white.

Tigger has a green balloon and Piglet has a blue balloon. Leaves and bees float around them.

The interior is red.

Check out this new Droid Builders mug, too.