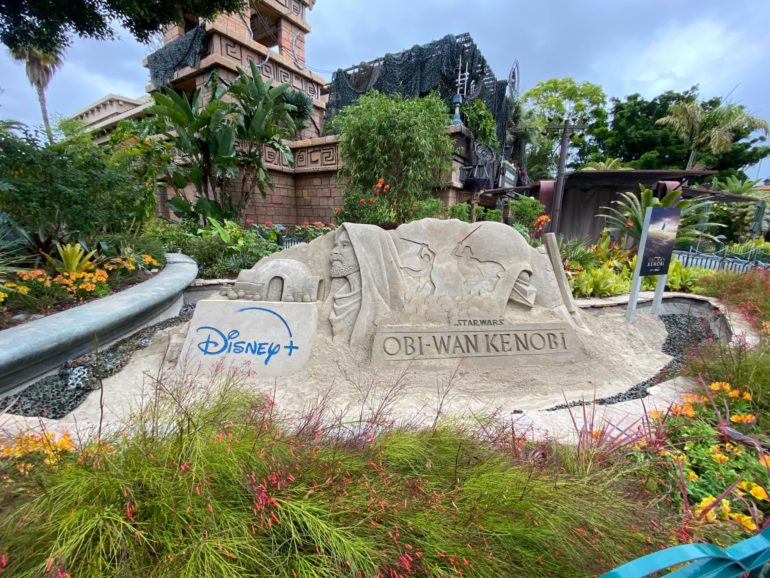 Hello there! To celebrate the premiere of “Obi-Wan Kenobi” on Disney+, a new sand sculpture is now on display at the Downtown Disney District.

We got to see the sculpture in progress the other day as it was being created. And now, we get to see it in its final form.

The sculpture is located in front of Star Wars Trading Post. It depicts two key characters from the show (and the Star Wars saga in general): Obi-Wan Kenobi and Darth Vader. (Famously, Vader doesn’t like sand, so this is a special appearance for the Sith Lord.) Obi-Wan appears on one side, amid the sand dunes of Tatooine. The Disney+ logo appears to the far left.

At the center we see silhouettes of a lightsaber duel between the two.

This sand sculpture replaced another that was on display earlier this month depicting a Tatooine street scene.

The opposite end features Darth Vader’s iconic helmet, along with a mysterious triangular spire, reminiscent of the shape of his castle on Mustafar.

The first two episodes of the limited series released on Disney+ premiered at Star Wars Celebration Anaheim 2022, held at the nearby Anaheim Convention Center. As a surprise, the episodes dropped three hours earlier than their usual time, debuting at midnight ET and 9 PM PT. Merchandise for the new series, including t-shirts and a limited release pin, was released earlier this week.

Do you support the Jedi or have you declared your allegiance to the Sith? Share your thoughts in the comments!