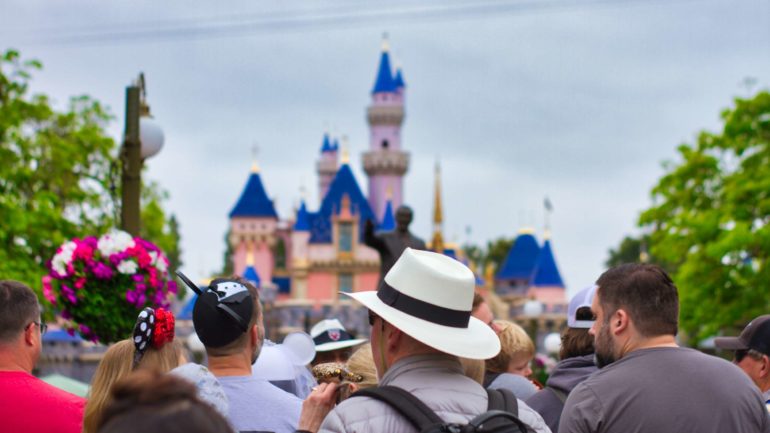 Hey there, hi there, ho there! We headed down to the Disneyland Resort to see what’s new and check in on the many construction projects happening on the west side of the park in preparation for the return of Fantasmic! So join us for this most recent photo report from both parks.

We made it through the gates just before opening, so we get to see the rope drop.

Even though it’s early, rope drop crowds are always hyped up to get the day started.

First off, we found some new pins that were released today. And we’re glad we did because the Mad Tea Party poster pin was sold out in under an hour.

Construction progress is moving along at Tarzan’s Treehouse as it is undergoing a retheme. The tree in the middle of the walkway has been almost entirely removed.

Pirates of the Caribbean is also undergoing refurbishment right now and the walls are still surrounding the attraction. We can’t wait to sail with the tide once again when the attraction reopens on July 1.

There is also an ongoing refurbishment to much of New Orleans Square ahead of the reopening of Fantasmic! on May 28. The land was covered in walls recently, but some have started to come down of late.

We also spotted crews at work building a new housing box for equipment of Tom Sawyer Island, on the stage where Fantasmic! is performed.

We found some cute new Park Pals in Pooh Corner and we couldn’t resist taking Mr. Toad over for a picture with his motorcar.

Wandering around the park, we got into some trouble with the First Order and had to seek out Chewbacca to get the Rebels on our side.

From onboard the Monorail, we can get a glimpse of what is happening in the Finding Nemo Submarine Voyage lagoon. It is bright and colorful, and not quite full yet.

But what a view from up here. Couldn’t ask for a better day.

We stopped by Disney’s Grand Californian Hotel and Spa to try out some new treats that have arrived in the GCH Craftsman Grill quick service restaurant.

We went for all three new Star Wars treats — two donuts and a cupcake — and we didn’t regret it at all. You can see our whole video review on our YouTube channel, or by clicking the video below:

It was a pretty calm day at DCA. So calm, in fact, that Mr. Potato Head took the day off to relax behind his curtain. Buzz Lightyear stepped in to greet guests out in front of Toy Story Midway Mania on his behalf.

We found some new Ms. Marvel merchandise in The Collector’s Warehouse, including this cool jacket, as seen above, and a new Loungefly mini backpack, as seen below.

One final parting shot from the park. On our way out, we got a little artsy with the photography. But with so many cool things to look at on a beautiful day, can you blame us?