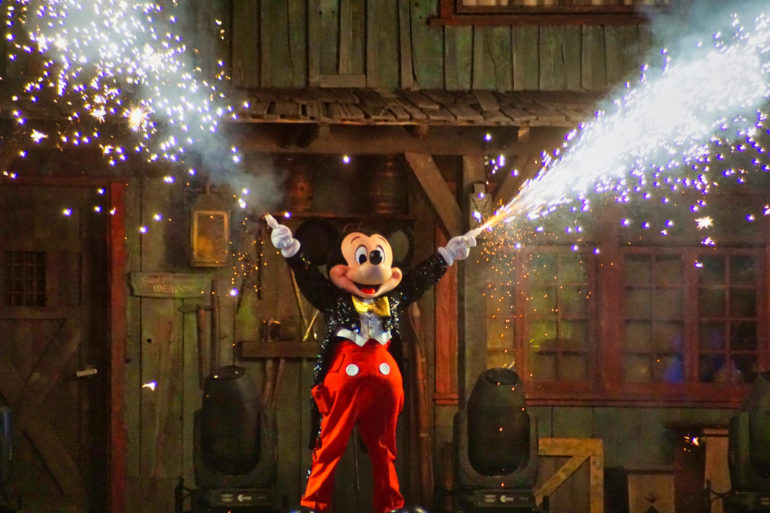 Welcome back to “Fantasmic!”

Tonight, our friend and host Mickey Mouse used his vivid imagination to create magical imagery for all to enjoy. In a moment, you can experience a beautiful fantasy or an exciting adventure! But beware, nothing is more powerful than the imagination, for it also expanded Mickey’s greatest fears into an overwhelming nightmare.

Luckily, the powers of Mickey’s incredible imagination were strong enough, and bright enough, to withstand the evil forces that invaded his dream. This is Fantasmic!, a journey beyond your wildest imagination. And it has at long last returned to Disneyland.

After more than two years off, Mickey is finally imagining again. Just like Steamboat Willie reappearing on the Mark Twain after his battle with Maleficent just like nothing has happened, so too did Fantasmic! return to the Rivers of America, and it felt like no time has passed.

The show closed with the rest of the park in March 2020 during the COVID-19 pandemic. Recently, there has been several months of work to bring the equipment back online in preparation of the show’s return. New Orleans Square has also had a fair share of work done to better accommodate the crowds for the show.

The show is virtually unchanged from the pre-pandemic run, with all of the new sequences added in “Fantasmic! 2.0” intact.

Some smaller elements did change, such as a screen behind Mickey Mouse during some segments. There were also some choreography changes, but nothing major.

And at the very end, as always, Mickey was still able to defeat the evils inside of his dream.

We watched the first official show back tonight at Disneyland, and you can watch along with us on our YouTube page, or by clicking the video below:

Are you excited to see Fantasmic! return? Let us know in the comments below.