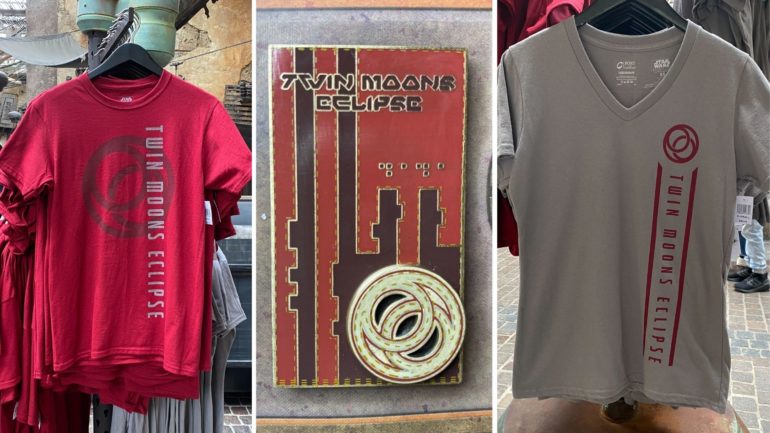 Disneyland After Dark: Star Wars Nite in 2020 was set to celebrate Twin Moons Eclipse Day. Unfortunately, the COVID-19 pandemic closure shuttered the park in March 2020 and the event planned for August 27, 2020 never materialized. But now, with the park reopened and Disneyland After Dark: Star Wars Nite resuming, the merchandise that was presumably slated for the 2020 event has finally been released! We found a pair of new shirts and a pin celebrating the Twin Moons Eclipse at Creature Corner in the Marketplace of Black Spire Outpost at Disneyland.

This Twin Moon Eclipse pin is dated 2020 in Aurebesh (tech) numbers. This was likely made up for the initial event and not reprinted with the proper date.

This v-neck shirt is a soft grey with the logo and verbiage running down the left side.

This vibrant red shirt for men features the logo more prominently and the verbiage running down the left side of the body.

These shirts and pin were announced just the other day at Star Wars Celebration and became first available at the final Disneyland After Dark: Star Wars Nite. They are now available in the park to the general public.

Will you be adding the Twin Moons Eclipse merchandise to your collection? Let us know in the comments below.