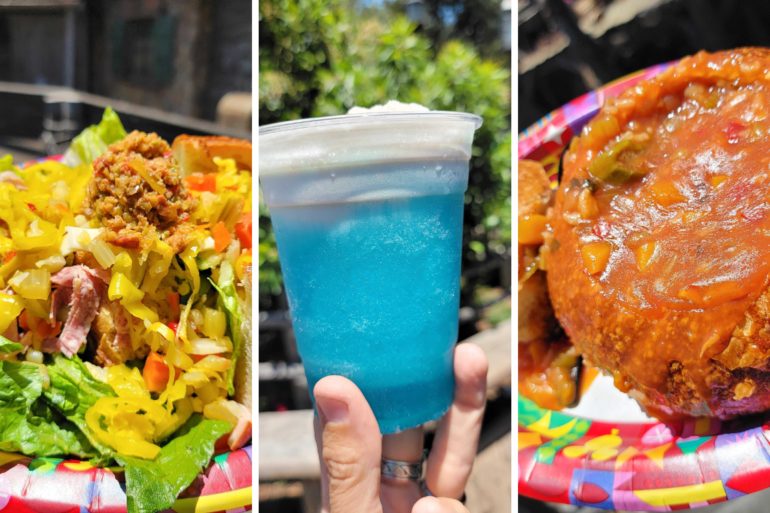 REVIEW: A Disappointing Taste of the South with Pelican Punch, Vegetable Gumbo and Muffuletta Salad from Harbour Galley at Disneyland

We decided to go down the bayou and sample the new items at Harbour Galley in Disneyland. We expected a flavorful taste of the south — instead, we got creative meals that failed to deliver the delights of southern comfort.

Watch our video review below and keep scrolling for photos and information.

A chilled tropical blend of pineapple, coconut, and lime.

This bright blue drink topped with white cream tastes exactly like Hawaiian Tropic’s After-Sun Lotion smells — to the point that drinking it was off-putting. Though the taste was alright and somewhat tropical, the blue-colored artificial syrup gives a plastic aftertaste. To those out there who wish to drink melted tropical-themed candles, this is the drink for you.

We’ll be sticking to Piña Coladas from here on out.

A good muffuletta is only as good as its tapenade (a paste made from olives). And if you don’t have a good tapenade, you don’t have a good muffuletta. Unfortunately, the same goes for a muffuletta salad. This traditional dish of New Orleans was essentially just a chef’s salad on bread without the taste of olives to guide it. The giardiniera was almost entirely absent, and the Italian dressing packet (served on the side) didn’t add much to the dish. And let’s not even talk about the overabundance of pepperoncini. All in all, we were disappointed that this interesting and fun take on this southern sandwich was ruined by a lack of flavor.

That being said, it did look very pretty.

We went with vegetable gumbo this time and found it to be spectacularly average, tasting very similar to the gumbo served at Royal Street Veranda just down the way. There’s nothing wrong with reusing a recipe that works, but we wanted something new. All in all, the gumbo’s flavor was alright as far as a hint of spice and extra okra can go.

Now for the real highlight — the bread bowl. The cooks carved the bowl very shallow, so there wasn’t exactly a balance of bread and gumbo, but perhaps that’s the point. The bread was soft and fresh and just a bit chewy. It filled our bellies and reminded us a bit of what southern food should taste like. Clearly, this was the main event.

We hope you enjoyed our sampling of Harbour Galley’s southern (un)comforts. Tell us what you thought of the menu below!