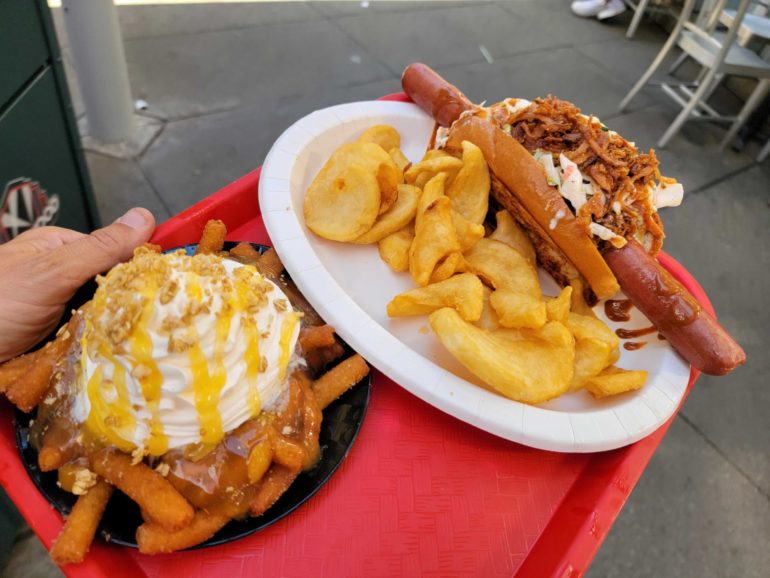 Watch our video review below and keep scrolling for photos and information.

This hot dog is indeed a foot long, but only the dog. Not the bun, not the pulled pork, not the slaw.

Once you get through the first three bites of just pure hot dog, the real meat of the dish kicks in. The pulled pork is fine. It’s not exceptional but it does its job.

The slaw has a slight vinegar tang which helps cut through the fats, grease, and sodium of the hot dog and pulled pork. Overall, it was just fine. It’s a hot dog topped with a middle-of-the-road, passable pulled pork. It’s really nothing earth-shattering but if you’re in the neighborhood and hankering for a hot dog, it’s better than we expected.

These funnel cake fries were surprisingly good, though they stopped just short of glory. The peach glaze is basically the syrup from peach pie filling with small chunks of canned peaches added.

Pair this with the creamy whipped topping and the cinnamon sugar-dusted funnel cake fries, and you have a dessert that is surprisingly satisfying.

But with the peach pie filling and the cinnamon sugar flavor from the funnel cake fries, it really does feel like they could have gone a little bit further and done something really great.

A little bit of graham cracker crumble or pie crust chunks would make it a peach pie variant dessert. Then it could have really taken us all the way. As it stands, it’s no slouch but it also could be just that much better.

Are you excited to try these dishes at Award Wieners this summer? Let us know in the comments.