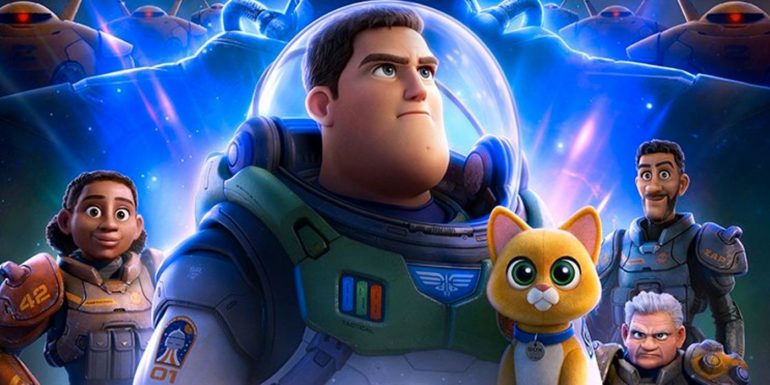 REVIEW: Pixar’s ‘Lightyear’ is Everything a Toy Story Fan Could Want and More

It is refreshing to take to the keyboard and type up a positive review during one of the darker times in the Disney company legacy, but Lightyear is a shining beacon in the abyss, a long-awaited reminder of the magic of seeing a Pixar film on the big screen.

An epic sci-fi action-adventure and the definitive origin story of Buzz Lightyear (Chris Evans), the hero who inspired the toy, Lightyear follows the legendary Space Ranger after he’s marooned on a hostile planet 4.2 million light-years from Earth alongside his commander and their crew. As Buzz tries to find a way back home through space and time, he’s joined by a group of ambitious recruits and his charming robot companion cat, Sox (Peter Sohn). Complicating matters and threatening the mission is the arrival of Zurg, an imposing presence with an army of ruthless robots and a mysterious agenda.

In short, the film is a perfect love-letter to the Toy Story series but manages to balance that nostalgia and fan service with an enthralling, and often hilarious, space epic. Lines made famous in the Toy Story series are regurgitated in masse, but they all feel naturally at home in the new dialogue. Fan boys and girls will also squeal in their seats from the thoughtful inclusion of familiar props and such from the Toy Story franchise. There are enough “Easter Eggs” to the source material in this film to make a Marvel director blush.

Eagle-eyed Disney Parks fans will find a few interesting references as well, which makes sense as the company is often forward-thinking about the inclusion of new IPs in the theme parks while their movies are in production. Rumors already indicate there are tentative plans to update the Buzz Lightyear rides around the world, but there’s much more than that to come and much sooner…

Buzz’s feline companion Socks steals the show with gags and one-liners that are sure to sell mountains of plush-robot-cats this summer. Meanwhile, Chris Evans manages to seamlessly take over the Buzz Lightyear character. While the voice is different, it never feels like a leap away from the Space Ranger we all love, making it easy to understand how this movie protagonist could’ve inspired the toy in 1995.

All in all, there is no weak-spot in the casting, with every performance achieving the intended result. Some secondary character seem a bit archetypal, but get Buzz and the Hawthorne family members where they need to go in the plot.

Michael Giacchino’s score falls deep into the background at times, and while you won’t be humming it when you leave the theater, it sets the proper mood throughout the film.

While Lightyear may not reach the storytelling heights of Up, Wall-E, or Toy Story 3, it is still a fun, emotional, and meaningful movie in the Pixar legacy. I would assume it will be met with mostly praise by critics and acclaim from the public, which should make it one of the biggest financial wins of the year at the box office. It feels like a movie event worth traveling to the theater for based on the subject matter, but the film itself warrants that outing with a scope and scale best experienced in theaters and not on Disney+.