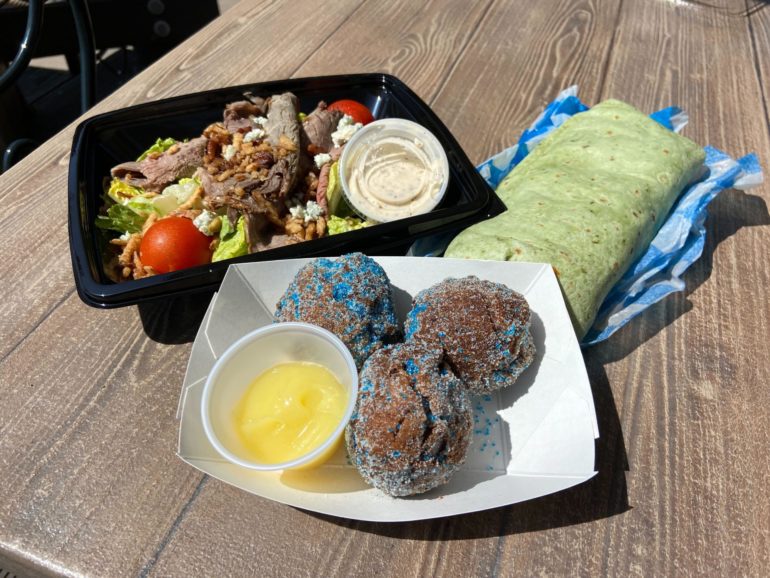 We moseyed down to Royal Street Veranda to try the new blueberry fritters and sample a couple of interesting items from the menu. We weren’t exactly impressed with what we got.

To start off, we tried the Street Steak Salad. Let’s just say, it wasn’t worth the $11.49 we paid for it. The lettuce was a tad wilted, the giant cherry tomatoes couldn’t be mixed in and the beef was flavorless.

The roast beef was in fact too tough to cut into bite-sized chunks with nothing but a plastic fork and knife. Also the dressing was a bit much for such a flavorless dish to begin with. All we could taste was horseradish. The only good addition to the salad was the crunchy candied pecans.

Overall, this would have been better as a sandwich.

The impossible wrap wasn’t terrible, especially considering the lack of vegan options around the park. It packed a lot of flavor in a visually-basic dish that it actually surprised us. In fact, if it hadn’t specifically mentioned impossible plant-based meat, we probably would have never known.

The spinach wrap was huge so it took us awhile to get to the (not) meat of the wrap. The flavor itself was very similar to store-bought taco seasoning. It’s a bit on the hotter side but not exactly something to write home about.

Still, a great option for vegan guests trying to survive at Disneyland.

With Blue Sugar and served with Lemon Curd Dipping Sauce

This was the highlight of the meal for us. The blueberry fritters were delicious. We have a history of getting fritters heavy on the grease at Royal Street Veranda so we were pleasantly surprised by the fritter’s cakey texture.

The lemon curd dipping sauce was an excellent pairing with this heavy dessert. The sharpness of the lemon helped cut the sweetness of the blueberry. All in all, a great dessert option for this summer.

Read our review on another southern-inspired snack stand, Harbour Galley, which has some disappointing new items. Or look into the grand re-opening of Blue Bayou Restaurant just a gator crawl away from Royal Street Veranda!