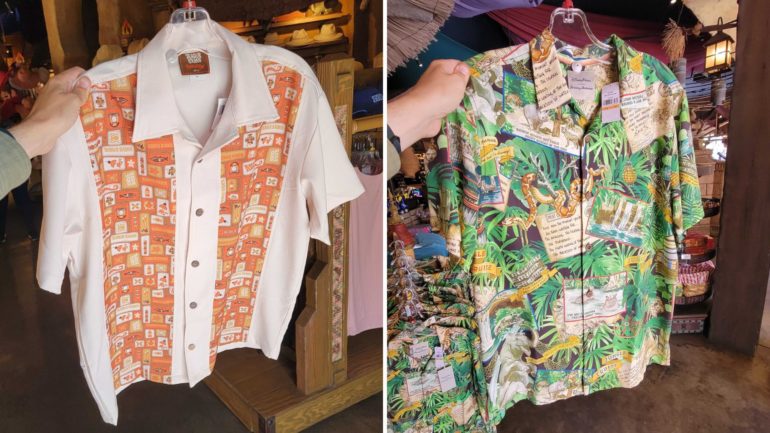 An updated version of an old Trader Sam’s Grog Grotto shirt and a new Jungle Cruise shirt are now available at Disneyland Resort.

This is an updated version of a shirt first released at Walt Disney World Resort last year. The bowling-style shirt is a sandy beige featuring Trader Sam’s motifs in shades of brown and orange.

Fans can recognize many familiar designs on the shirt, including the Trader Sam’s logo and the HippopotoMai-Tai.

A tribal mask has been removed from the design, likely as part of Disney’s ongoing cultural sensitivity efforts. Tribal masks were also removed from Adventureland at Walt Disney World.

The back of the shirt is blank.

The Jungle Cruise-inspired shirt has an all-over leaf pattern.

Among the leaves are postcards, signs, and animals from Jungle Cruise. One postcard featuring hippos reads “I’ve got a sinking feeling about this.”

The animals include a bathing elephant and a python in a tree.

Both of these shirts are available at the Adventureland Bazaar in Disneyland. Which one would you wear? Let us know in the comments.