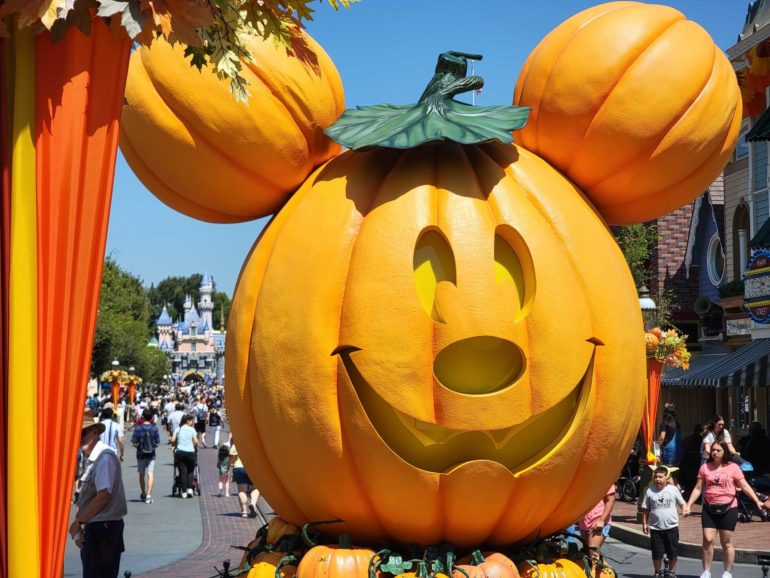 It’s nearly time for spooky season once more at the Disneyland Resort, and we’ve had a major breakthrough in decor this week as the iconic giant Mickey pumpkin has been installed on Main Street, U.S.A. along with some carved character face pumpkins for this year’s Halloween!

The gigantic pumpkin has been an icon of Halloween at Disneyland for over 15 years and always sits where Town Square meets Main Street.

The pumpkin has a giant Mickey face carved on the front and two smaller (but still massive) pumpki ears to create the iconic Mickey Mouse look. Much smaller (and relatively normal-sized) pumpkins sit at its base.

The back side features Mickey winking as guests walk down Main Street.

Character pumpkins representing each of Disneyland’s themed lands (except Star Wars: Galaxy’s Edge” are also now in place on bases around the Partners statue in the Hub. Here we see Buzz Lightyear for Tomorrowland.

Woody’s here to rustle the gang for Frontierland.

Who else but Jack Skellington could represent New Orleans Square, with his iconic attraction overlay almost here!

And finally, Tarzan still represents Adventureland. Although considering his Treehouse is now under retheming, this may need to change by next year.

Are you excited to see Halloween come to Disneyland? Let us know in the comments below!