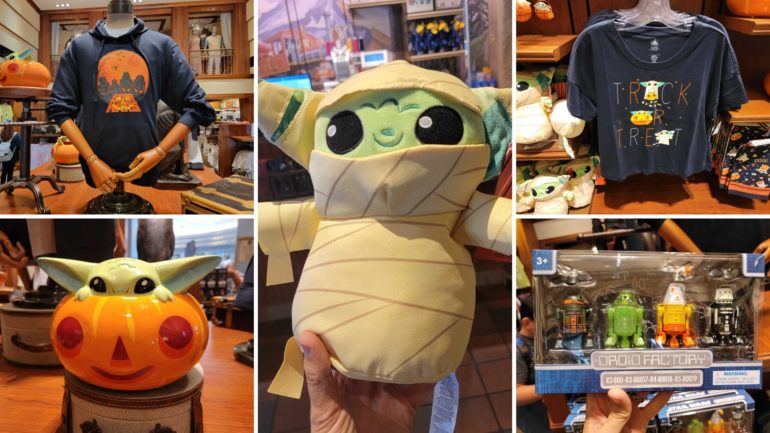 This Grogu (a.k.a. Baby Yoda from “The Mandalorian”) plush is wrapped up like a mummy.

We found him in Pioneer Mercantile at Disneyland Park.

The Halloween-themed droids in this set are R2-B00, R3-B0017, R4-B0018, and R5-B0019. The first is black, orange, green, and purple. The second is translucent green. The third resembles a piece of candy corn. And the last is black with white designs, giving it a skeletal look.

This droid is called R7-FNG. It’s mostly purple, with red, white, and black touches, and resembles a vampire.

This dark blue sweatshirt features four droids silhouetted against an orange circle. TIE Fighters fly through the air behind them. “Star Wars” is below them, with a jack-o’-lantern face within the letters.

The sweater is topped off with a dark blue hood, matching the rest of the garment.

Store your candy in this ceramic bowl that looks like a jack-o’-lantern with Grogu popping out of the top.

This set includes two kitchen towels. One is black with an all-over pattern of Grogu, candy, and stars.

The other is white with a large image of Grogu in a jack-o’-lantern.

Finally, keep celebrating Halloween into Christmas season with this ornament.

Grogu is reaching out of his crib, which looks like a pumpkin, and holding a trick-or-treat bag.

Everything other than the plush was at Elias and Co. in Disney California Adventure.