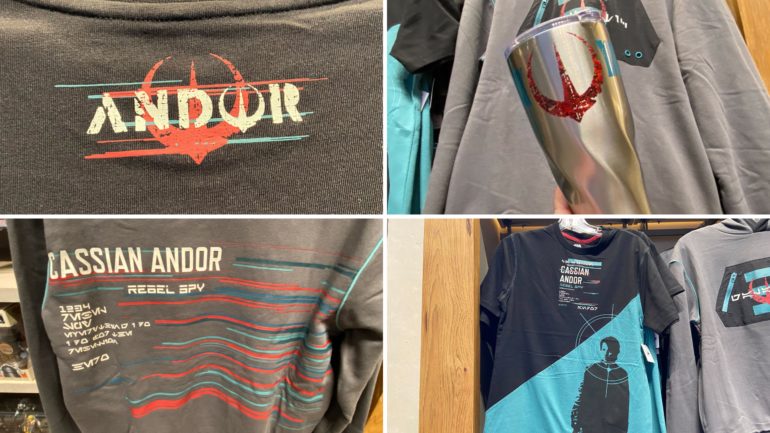 “Andor” is coming to Disney+ on September 21, and we found some new ‘Andor’ merchandise today at Disneyland!

This metal tumbler features “Andor” on one side along with the Rebellion logo on the other side.

Season 1 of “Andor” follows Diego Luna’s Cassian Andor five years before the events of “Rogue One.”

The lid on this tumbler is clear plastic.

This long sleeved shirt featuring the iconic TIE fighter is also new! It features front, rear, and side view of a TIE fighter and a red logo of The Galactic Empire.

The back of the shirt is black with light blue piping along the shoulders.

The front of this sweatshirt showcases the Rebellion logo as well as “galactic” written in Aurebesh. Aurebesh is the writing system used to transcribe Galactic Basic Standard, the most spoken language in the Star Wars universe.

The back of the shirt reads “Cassian Andor” and “Rebel Spy” along with some words written in Aurebesh below.

If you translate some of this text from Aurebesh you’ll find words like: Andor, Rebel Spy, and hero.

This black and blue t-shirt features the same language as the sweatshirt, but also includes the likeness of Cassian Andor!

The “Andor” logo is located under the collar on the back of the shirt.

We found all these items at World of Disney at Disneyland’s Downtown Disney District.